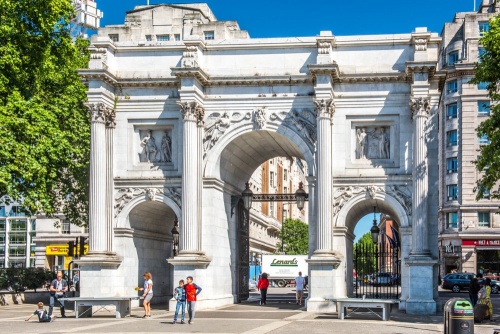 Marble Arch is a ceremonial gateway in the north-east corner of Hyde Park near Speaker's Corner. The iconic arch was designed by the architect John Nash as a triumphal arch for Buckingham Palace to celebrate British victory in the Napoleonic Wars. It was moved to its present location in Hyde Park in 1850.

John Nash was the Prince Regent's favourite architect and the man responsible for designing the Royal Pavilion in Brighton. When The Prince Regent ascended the throne as George IV her called on Nash to extend Buckingham Palace and make it a residence fit for a king. Part of Nash's commission for the Palace was to create a triumphal arch to act as a ceremonial entrance to the Palace and to celebrate the British victory over Napoleon.

Nash designed a remarkably ornate archway inspired by the Arch of Constantine in Rome and the Arc de Triomphe in Paris. The arch was to be topped by a huge equestrian statue of the king. We know exactly what Nash had in mind because he created a scale model of his design to show the concept to the king. George IV approved and Nash commissioned a range of statues and sculptural friezes for the arch in 1828.

The plans called for a military side to the arch, celebrating Wellington's victories over Napoleon, and a naval side celebrating Admiral Nelson's triumphs. Both sides were adorned with sculpted panels of battle scenes and winged figures known as 'Victories'. One end was carved with the word 'Trafalgar' and the other with 'Waterloo'. Under each name were inscribed the names of battles and prominent commanders.

As with many of George IV's ambitious projects, the new archway and the sculptures meant to adorn it cost much more than estimated, but George wasn't one to mind overspending. By 1830 the arch was under construction and most of the sculptures were finished, but then fate took a hand when the king died.

The Prime Minister at the time of George IV's death was the Duke of Wellington - the same man whose triumphs the arch was meant to celebrate. His attitude towards the cost overruns on the new arch was quite a bit different than the king's had been. He sacked Nash and called in Edward Blore to finish the arch in a much more economical fashion. 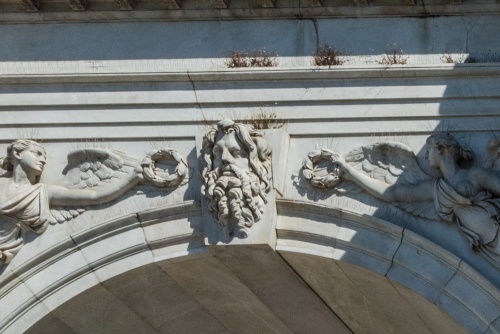 Figure of Neptune over the central arch

From Nash to Blore

Poor Blore found himself in possession of a large number of sculptures and architectural panels, but with no idea how they were meant to go together. He asked Nash for the architectural drawings, but Nash, still smarting from being sacked by the Prime Minister, refused to hand over the plans. Blore was forced to do the best he could with the aid of the small model that Nash had made for the king.

It is obvious that the model was merely a 'proof of concept' rather than an exact plan. For example, it shows the military side of the arch topped with a portrait of Admiral Nelson while the naval side depicts the Duke of Wellington.

Blore wisely decided that his best approach to cut costs was to get rid of most of the sculpture. He kept just four allegorical panels and a few small decorative elements. The ends, which should have had the names of battles and commanders, were left blank except for a trio of laurel wreaths.

So now Blore had an arch, and a lot of sculptures and allegorical panels lying about. What to do with them? He used several allegorical panels to decorate the central courtyard of Buckingham Palace and the rest of them he gave to architect William Wilkins for use on the National Gallery, which was being constructed at that time. You can see figures of winged victories over the eastern and western doors of the National Gallery, and figures of Asia and Europe are over the main entrance.

The equestrian statue of George IV that was supposed to sit on top of the arch now stands in the north-east corner of Trafalgar Square. 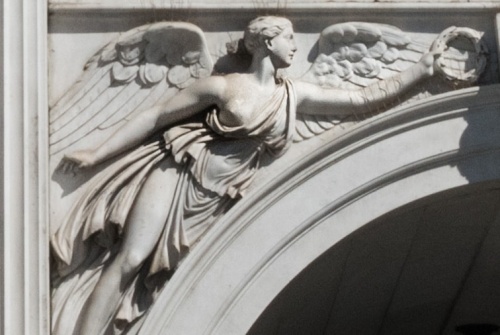 A figure of 'Winged Victory'

The arch served its purpose as a ceremonial gateway to Buckingham Palace for just 17 years. But it was not a popular addition. Blore's finished Palace made the understated arch look like out of place.

So a new home for Marble Arch was found in 1850 at Cumberland Gate, the north-east entrance to Hyde Park. There it could serve as an entrance to the Great Exhibition of 1851 which was being planned for the park. The job of moving the arch was given to the architect Thomas Cubitt. Under Cubitt's direction, the arch was disassembled, stone by stone, and reassembled in its current location in just three months.

Marble Arch served as a very grand park entrance until 1908 when a new road layout cut it off from the park, stranded on its own traffic island. 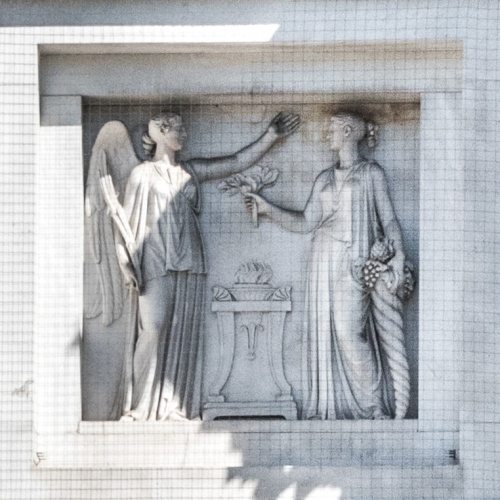 Figures of 'Peace and Plenty'

Marble Arch is, as its name suggests, made of marble (or, to be more precise, it is clad in marble). The stone is Ravaccione, a greyish-white Carrara marble imported from Italy. Each side is fronted by four large Corinthian columns, each carved from a solid piece of marble.

The north side of the arch (facing away from Hyde Park) is decorated with panels sculpted by Richard Westmacott, the sculptor responsible for the statue of Achilles in the south-east corner of the park. The north face is adorned with a sculpted panel with three female figures representing England, Scotland, and Ireland.

Another panel shows 'Peace with Trophies of War', with a female figure standing on a pile of weapons, shields, and helmets. The central arch has a keystone in the shape of a lion's head, while the secondary arches have keystones in the shape of Greek warriors.

The south side of the arch (facing towards Hyde Park), has panels sculpted by EH Baily, the same man who sculpted the statue of Nelson in Trafalgar Square. One panel depicts 'Peace and Plenty', while the other is an allegory for 'Virtue and Valour'. All three arch keystones depict a bearded figure thought to represent Neptune.

The ornate central gates are cast in bronze. Each gate has a central figure of George IV's symbol, with a lion above and St George slaying a dragon below.

Marble Arch has a [partly] undeserved reputation as a police station. It was never a fully functioning police station but it was regularly used as a police staffing point during public demonstrations. Small chambers built into the sides of the arch could be used as holding cells and interview rooms. 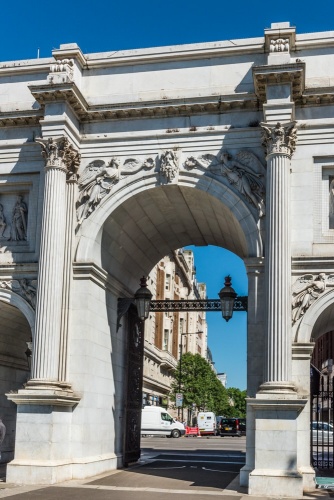 Marble Arch was commemorated movingly by the poet Sir John Betjeman in 1968 when he broadcast a documentary from the roof of the arch.

'How beautiful the London air, how calm and unalarming
This height above the archway where the prospects round are charming.
Oh come and take a stroll with me and do not fear to stumble ...'

Opposite Marble Arch on the traffic island at the junction of Edgware Road and Bayswater Road is a brass plaque, unnoticed by pedestrians who pass back and forth. It marks the location of the 'Tyburn Tree' the gallows where public executions took place until 1759.

Access couldn't be easier. Marble Arch underground station (Central Line) is directly opposite the arch. Simply take the Hyde Park exit from the station and you will find yourself in front of the arch.

More self catering near Marble Arch