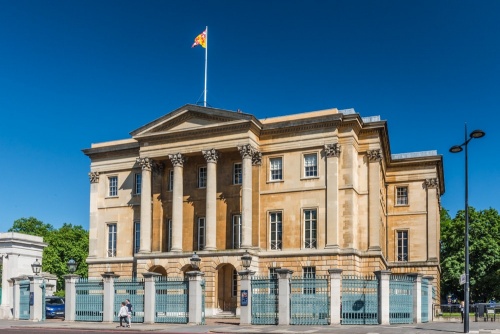 The London home of the Duke of Wellington sits opposite the entrance to Hyde Park. Commonly known as No.1 London, Apsley House was built between 1781-1787 by neo-classical architect Robert Adam for Baron Apsley, later the second Earl Bathurst. The prominent location of the house at the entrance to Hyde Park, and just outside the toll gates at Knightsbridge, led to the popular moniker 'No. 1 London', though there is no such official designation.

Apsley House was originally built of red brick, to a 5 bay design. In 1807 the house was purchased by Marquess Wellesley, elder brother to Arthur Wellesley, but financial difficulties forced the Marquess to sell Apsley to his more famous sibling in 1817, two years after the latter's victory over Napoleon at Waterloo.

Wellington nominated architect Benjamin Wyatt to carry our restorations at Apsley, and create a residence worthy of housing the Duke's growing art collection - and also serve as a London base for his sizeable political ambitions.

Wyatt expanded Apsley by two bays and built the Waterloo Gallery for the Duke's paintings. He also faced the red brick with more fashionable Bath stone and introduced his own version of French style to the interior.

Successive generations of the Dukes of Wellington lived at Apsley until the house was finally gifted to the nation in 1947. Today, English Heritage maintains the house and offers both guided and unguided tours.

The ground floor houses the grand state rooms, and a broad staircase leads to the first floor, where smaller, comparatively more intimate rooms can be seen. The Duke's own relatively simply quarters are on the third floor.

Apsley was never meant to be a real family home, indeed the Duke's wife and children lived primarily at his estate of Stratfield Saye. Rather, Apsley was meant to serve as a grand showcase for the Duke in London; a place to meet and greet the most powerful people of his day.

Apsley has been extensively restored with an eye to making it look as much as possible as it was in the Duke of Wellington's day. Even the arrangement of pictures on the walls has been reproduced, using old watercolour paintings as guides. 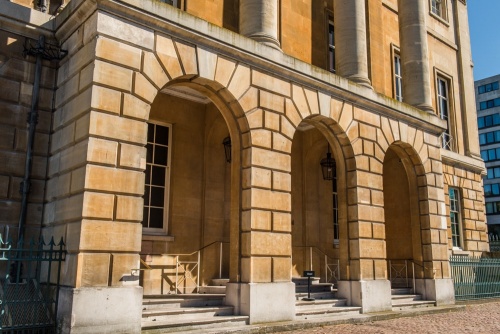 The first Duke of Wellington possessed a collection of art and fine furnishings perhaps unrivalled by any contemporary. And he didn't have to pay for all of it, either! After the Duke's victory over Napoleon at Waterloo, grateful nations and private citizens showered Wellington with gifts of thanks, including a fine Sevres porcelain service from Louis XVIII of France, and superlative Portuguese silver.

Here are also 200 paintings from the royal collection of the Kings of Spain that Wellington recovered from Joseph Bonaparte after the Battle of Vitoria in 1813. After King Ferdinand VII was reinstated as monarch, he asked Wellington to keep the paintings as a gift of thanks. The Duke, no fool he, agreed. Among these paintings are works by Goya, Velasquez, Correggio, and Rubens.

Front and centre upon entering Apsley is Antonio Canova's huge statue of Napoleon, portrayed as an ancient Greek athlete. The statue stands at the foot of the great spiral staircase; the only place in the house strong enough and large enough to hold the weight of the oversized statue. Even so, the floor had to be specially reinforced to bear the weight.

The sword carried by Wellington at Waterloo is on display in the Plate and China Room, as well as the sword of his great foe, Napoleon.

It is fascinating to compare Apsley House with Stratfield Saye; the Duke's country house in Hampshire. Apsley is very much Wellington's public face; a place for entertaining heads of state and the nobility in the style expected of a peer, military hero, and leading politician. The rooms are opulent, intended for show.

By contrast, Stratfield Saye is Wellington's private face, a humble family home, a comfortable place to get away from public expectation and live quietly, a place where the Duke could really be himself. 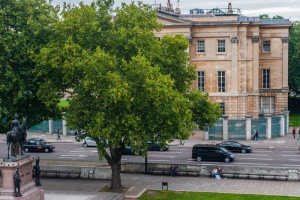 Apsley House from
atop the Wellington Arch

The house is on 3 levels, with an entrance hall, museum, small and large dining rooms, and a drawing room on the ground floor. The museum room was begun during Wellington's lifetime and contains a sumptuous display of fine porcelain, gold, and silver objects given to the Duke by European leaders after his victory at Waterloo.

The dining rooms are as Wellington planned them, as venues for his annual banquet on the anniversary of Waterloo. These banquets brought together soldiers who had fought at the battle.

In the cellar is an exhibition of military memorabilia, including Napoleon's death mask and medals awarded to Wellington by grateful heads of state across Europe. On the first floor are several more drawing rooms, lined with superb works of art. You navigate your way around the house with the aid of a rather good audio-video guide; not just the usual audio handset.

The a-v guide is extremely detailed, as are the printed guide in each room. We did find that there was only limited information on individual works of art on display, so if you wanted to learn more about anything in particular in any of the rooms, it was difficult, but aside from that a-v guides were better than at many other English Heritage attractions.

Apsley House faces Wellington Arch, a triumphal gateway intended as a ceremonial gate to the city of London. The Arch was moved from its original position to east traffic flow. It was once topped by a controversial equestrian statue of Wellington, but the statue has since been replaced by a huge sculpture of four horses pulling a chariot.

You really should plan to visit Apsley House and the Wellington Arch at one time; the two attractions are just a stone's throw apart, and you can get a combined ticket at a discount. And, of course, both are linked to the Duke of Wellington.

Apsley House holds the distinction of being voted Best Small Visitor Attraction by the London Tourist Board.

Note: You can get Free Entry to Apsley House with the London Pass

More self catering near Apsley House