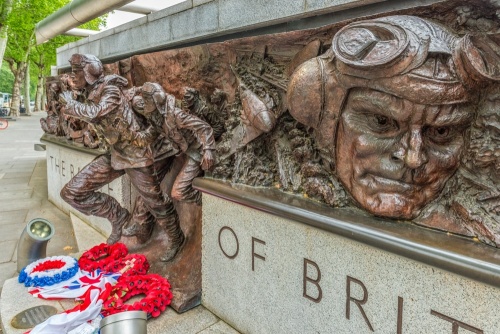 The Battle of Britain was one of the key battles in WWII. On 18 September 2005, the 65th anniversary of the Battle, a sculptural monument was unveiled on the Victoria Embankment in London to act as a permanent memorial to 'The Few'.

The unveiling ceremony took place in the presence of HRH Prince Charles and Camilla, Duchess of Cornwall. The date of unveiling was chosen to coincide with the annual service of Thanksgiving at nearby Westminster Abbey to those who lost their lives in the Battle of Britain.

The term 'The Few' comes from Winston Churchill's famous phrase in which he declared that 'Never, in the field of human conflict, was so much owed by so many to so few.' That phrase is inscribed on the river side of the monument. Churchill may have been influenced by William Shakespeare's phrase from the play Henry V, 'We few, we happy few, we band of brothers'. 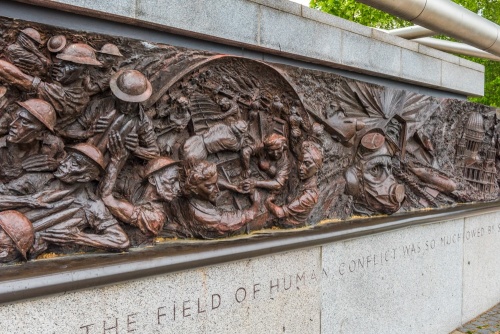 The monument was the brainchild of Bill Bond, MBE, the founder of the Battle of Britain Historical Society. Bond launched an appeal for funds and negotiated with the City of Westminster for the site. People from all over the world made donations, and the Czech government contributed to the cost. The British government, however, contributed nothing.

The sculptor was Paul Day, who is also responsible for the Iraq and Afghanistan Memorial in Victoria Embankment Gardens (2017). The monument was cast by the prestigious Morris Singer art foundry of Hampshire, thought to be the oldest fine art foundry in existence. The company also cast the statue of Boadicea and her Daughters at Westminster Bridge, just a few minutes walk away, and the famous lions in Trafalgar Square. 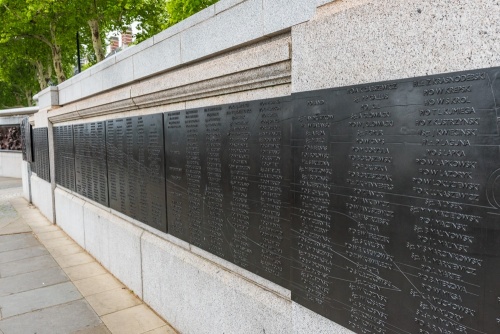 The monument cleverly uses a large granite structure originally made as a smoke outlet for steam trains on the Circle and District Line underground railway. The 82 foot-long (25m) piece of granite was cut at an angle to create a pedestrian walkway through the centre. The granite sections hold panels of high relief sculpture in bronze depicting dramatic scenes from the Battle of Britain.

The centrepiece is a life-sized tableau of airmen scrambling to reach their aircraft, with the figures bursting out of the granite panel into space in front of the monument.

The exterior of the granite block bears bronze plaques listing the names of 2,937 airmen from 14 countries who took part in the conflict on the Allied side (the original count was 2,936 but another name was added at a later date). Of these 2,937, 544 died in the conflict and another 795 died before the end of the war. Airmen's names are grouped by nationality, and the plaques also depict squadron badges.

Here is the breakdown of air crewmen awarded the Battle of Britain clasp for having flown at least one sortie with a unit of the RAF Fighter Command from 10 July-31 October 1940. 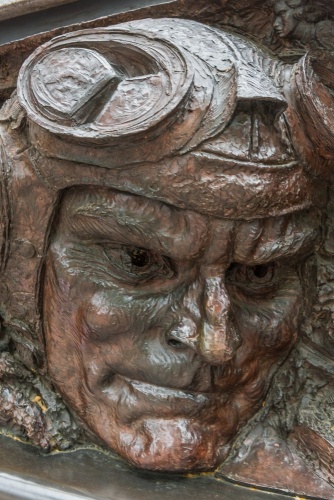 Paul Day's sculpture is remarkable for its detail, but also for the way each figure's face shows emotion, from fear to determination. The sculptural panels depict a range of scenes, from flights being plotted in an operations room, Observer Corps scanning the skies for incoming aircraft, crews waiting for the signal to scramble, and anti-aircraft guns being loaded and fired. One dramatic scene depicts a dogfight between an RAF Spitfire and a German Me109.

Other scenes show the civilian side of the conflict, such as ordinary people taking shelter from the bombing and brewing up tea in an Anderson shelter. One particularly eye-catching scene shows the dome of St Paul's Cathedral in a clearing of smoke, a reminder of the famous wartime photo of the cathedral still standing after a bombing raid. The cathedral became a symbol of resistance during the war, and the sculpture captures this beautifully. 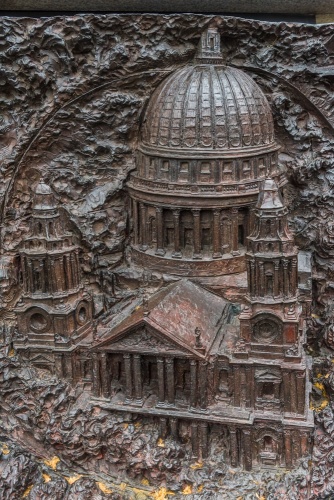 Another scene shows the role played by women building aircraft, and ground crew preparing the craft for flight. A reminder of the grim cost of war comes from a scene showing rescue workers searching the rubble for casualties.

The Monument is thought-provoking, poignant, and beautifully sculpted. 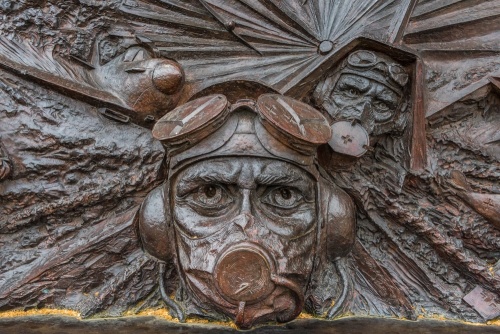 More self catering near Battle of Britain Monument

More bed and breakfasts near Battle of Britain Monument