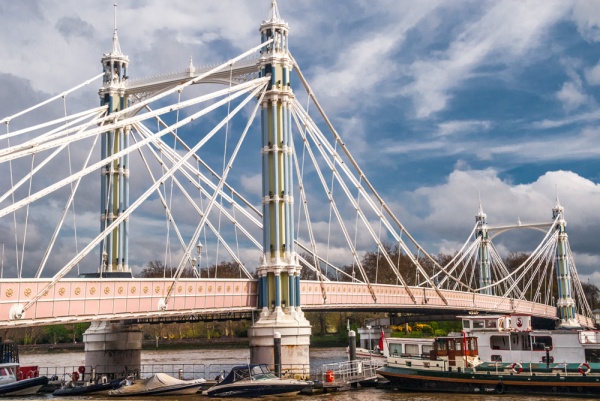 The Albert Bridge from the Chelsea bank

One of London's most attractive and historically interesting monuments rarely gets a mention in tourist guides. The Albert Bridge is a marvellous example of Victorian architecture, but its the bridge's history that makes it so interesting.

In 1771 the timber Battersea Bridge was built across the River Thames, linking Chelsea, on the north bank, to the agricultural village of Battersea on the south. By the middle of the 19th century, the Battersea Bridge was decaying. Victorian Bridge, named for the reigning queen, was built just downstream. Unfortunately, the new bridge suffered badly from congestion.

In 1860 Prince Albert, Victoria's consort, suggested the idea of a toll bridge between the existing bridges. The Albert Bridge Company was established, and in 1863 they proposed to erect a new bridge between Battersea Bridge and Victoria Bridge.

The owners of Battersea Bridge were not thrilled with this, fearing loss of revenue, but an Act of Parliament in 1864 authorised the bridge on condition that it be completed within five years. The Albert Bridge Company had to compensate the owners of Battersea Bridge by paying an annual fee during construction and agreeing to buy the older bridge when the new one was finished. 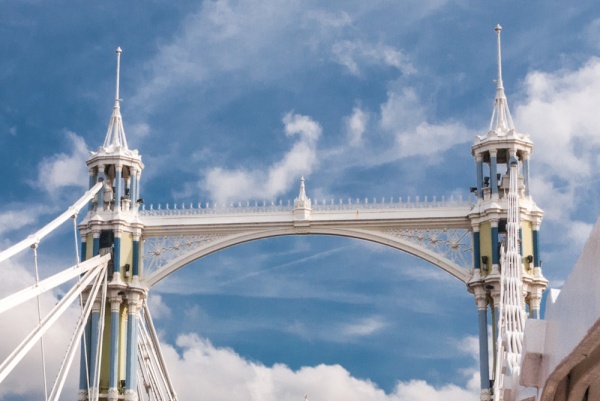 Two of the cast iron supports

Architectural engineer Rowland Mason Ordish was commissioned to design the Albert Bridge. It should have been a good choice, for Ordish had experience working on other large projects in the capital, notably the Crystal Palace, the Holborn Viaduct, St Pancras railway station, and the Royal Albert Hall.

Ordish even had time for a 'trial run', as the building of the Albert Bridge was delayed by construction of the Chelsea Embankment on the north bank of the river, so Ordish had time to design and build a new bridge in Prague to the same design.

Ordish opted for a controversial suspension bridge to his own patented design, using a parabolic cable to help take the weight of the central span, aided by 32 inclined stays of wrought iron, linked to one of four octagonal cast-iron towers, themselves resting on cast iron piers filled with concrete. At the time they were made, the piers were the largest castings ever produced. The bridge was 41 feet wide and 710 feet long, with a central span over the river of 384 feet.

Unusually, the support towers stood outside the bridge, so that the roadway was not obstructed. At each end of the bridge were two tollbooths with a bar stretched between them.

Construction began in 1870 and was anticipated to take just one year, at a cost of £70,000. Both estimates proved absurdly optimistic, and the bridge actually took three years to complete, at a cost of some £200,000. 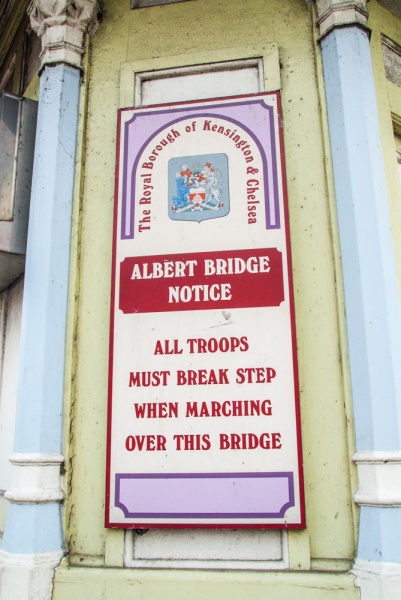 'All troops must break step' warning

Ordish's design was plagued with problems from the start. It quickly gained the moniker 'The Trembling Lady', as it was subject to severe vibrations when large numbers of pedestrians crossed at once.

The problem was made worse when troops from the nearby Chelsea Barracks marched across the bridge. The severe vibrations caused concerns that the bridge might be made unsafe, and warning signs were placed at each end of the bridge asking troops to break step when crossing. The signs are still in place.

Not only was the bridge an engineering failure, it was a financial disaster. By the time the bridge opened, it was 9 years after the initial Act of Parliament authorising construction. Throughout that period the Albert Bridge Company had been paying compensation to the Battersea Bridge owners. Now they had to buy the older bridge as agreed in the Act. That made them financially responsible for the upkeep of the decaying bridge.

The cost of compensation and upkeep meant that not enough money was available for wide roads leading to the Albert Bridge. That, in turn, made the new bridge more awkward to reach. 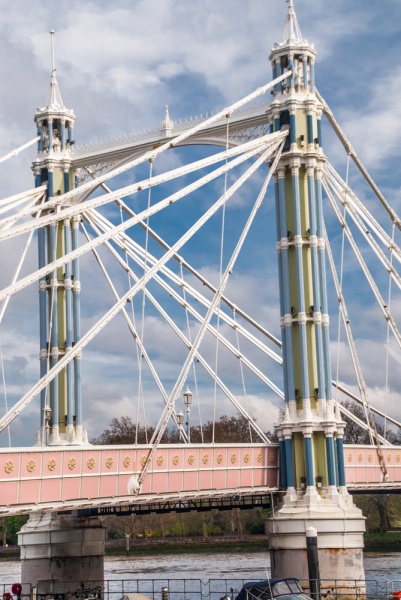 A pair of support columns

In 1884 Sir Joseph Bazalgette, Chief Engineer for the Board of Works, inspected the Albert Bridge and found that the iron rods were showing signs of wear. Steel chains were added and a new wooden deck laid, but engineers were still concerned over the structural integrity of the bridge and a weight limit of 5 tons was put in place. To be fair to Rowland Ordish, he had wanted to use the extra steel bars from the start but had been overruled by the company directors on grounds of cost.

The narrow roadway and structural weakness made the Albert Bridge completely unsuited for the advent of motor cars. In 1926 a plan was put forward to demolish the bridge and replace it with a new four-lane bridge. The Great Depression intervened, however, and the old bridge lived on.

In 1972 the Greater London Council installed two concrete piers in the centre of the river to support the bridge deck. The roadway was intentionally narrowed to take only one stream of traffic at a time. 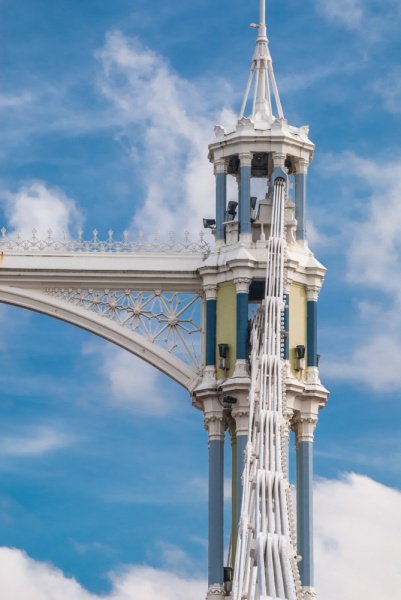 In 1992 the bridge was repainted a rather striking mix of green, blue, and pink, making it perhaps the most distinctive bridge in London. The eye-opening paint scheme had a purpose - to make the bridge easier to spot in a fog by ships on the river. Over 4000 lights were installed so that the bridge could be illuminated at night.

A final (for now) refurbishment in 2010 was made necessary by rotting of the timber deck. The rotting damage was blamed on an unusual source; dog owners from Chelsea taking their pets across the bridge to Battersea Park for exercise. Dogs being dogs, they would relieve themselves on the bridge, and the resulting moisture damage slowly ate away the timber deck.

Access to the Albert Bridge is from the Chelsea Embankment or Battersea Park. If you opt to approach from the Chelsea side, don't miss the chance to visit Carlyle's House and Chelsea Old Church, a very short walk away from the north end of the bridge. The closest tube station is Sloan Square, about a 15-minute walk.

More self catering near Albert Bridge