HERITAGE HIGHLIGHTS:   A section of the Berlin Wall 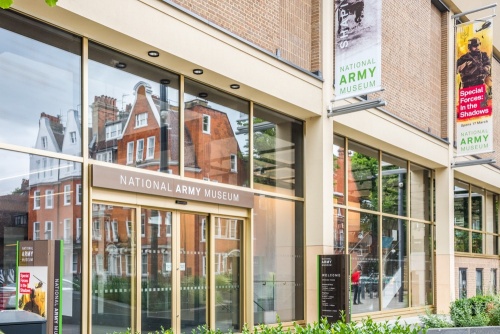 London is home to some outstanding military museums, such as the Imperial War Museum, Churchill's War Rooms, and the HMS Belfast. While the IMW tells the story of conflicts involving multiple branches of the military across the world, the National Army Museum in Chelsea traces the history of the British Army and its changing role over time, from warfare to peacekeeping, and its relevance in today's society.

The museum is intentionally thought-provoking, asking questions that examine our attitudes to the army and its role, as well as remembering the men and women who served in it over the past several centuries.

The museum was launched by royal charter in 1960. The museum retains its royal connection to this day, with the Duke of Kent currently acting as its patron. In 2014 the museum underwent a three-year redevelopment costing £23.75 million. It was reopened by HRH Queen Elizabeth II and Prince Philip in 2017. 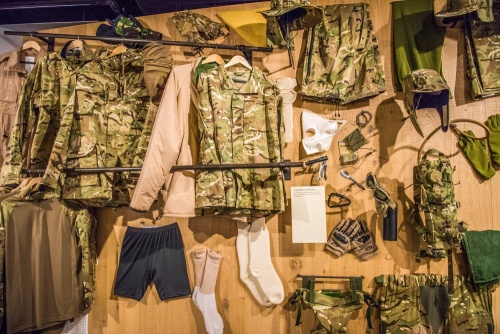 The National Army Museum takes a different approach to most military museums. Rather than present a chronological history of the army, the museum is divided into five themed galleries; Soldier, Army, Battle, Society and Insight. The galleries look at what it is like to be a Soldier, how the Army began, how Battle tactics and technology have evolved, the Army's role in Society, and how the army has impacted events around the world.

Intertwined with these themes the museum looks at sport, leisure and culture in army life, the army in war and peacetime, the army's structure, and a soldier's daily life. It also prompts visitors to examine broader questions about the army, such as 'What issue should the Army focus on in the coming decade?' and whether the money spent on the Army should be spent elsewhere.

But the National army Museum isn't just about challenging questions, it is about people. The museum does an outstanding job bringing the stories of individual soldiers to life. Some of the highlighted soldiers will be well-known, others less so, but the museum brings their stories vividly to life. 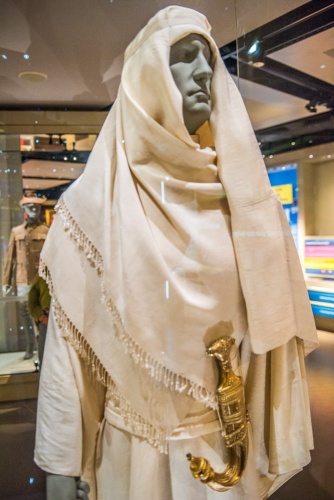 Lawrence of Arabia's robe and dagger

The range of exhibits is remarkable. To take just one example, the 'Soldiers' theme covers the role of women in the army, horses in WWI, the story of Special Forces, the Special Operations Executive (SOE), how Britain commemorated WWI soldiers, soldiers' wives and family life, sport and morale in the British army, the Commandos, army recruitment, equality in the army, military mascots and pets, and the history of National Service, to name just a few. See how WWI troops celebrated Christmas in the trenches,

Where the museum shines, though, is in telling the stories of soldiers, both officers and enlisted personnel. Like the story of Major-General Sir William Inglis, the original 'Die Hard'. Long before Bruce Willis took to the silver screen, Inglis led his men at the Battle of Albuhera in the Peninsular War (1811).

Though badly wounded, Inglis refused to be carried to safety and turned down medical attention. He lay down at the base of the regimental colours and encouraged his men with the rallying cry, 'Die hard, 57th! Die hard!' Inspired by their leader, the 57th held their ground until a British counter-attack drove the French army from the field. The 57th (now The Princess of Wales' Royal Regiment) gained the nickname, the 'Die Hards'.

As for Inglis, he survived to lead his men again. He was wounded on several occasions and had two horses shot from under him in combat. He was made a Knight Commander of the Order of the Bath on his retirement from the army. 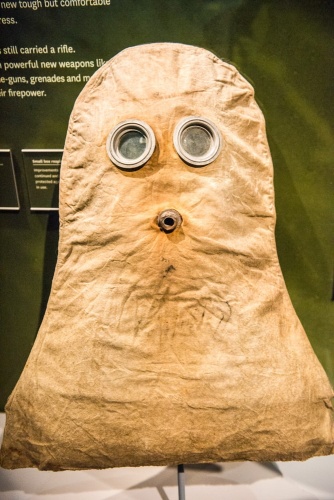 But there are more fascinating personal stories. See the running kit worn by Dame Kelly Holmes when she won gold medals in the 800m and 1500m at the 2004 Olympic Games. Holmes served in the army from 1988-1997 and combined her military career with her athletics training and competition.

See the robes and dagger worn by Major TE Lawrence (Lawrence of Arabia) during the Arab Revolt of 1916. Major Lawrence would have been familiar with the field dressing kit carried by soldiers during WWI. All soldiers had to carry the kit and any man found without it was charged under military law.

Another item carried by soldiers in WWI was a gas hood. The museum displays a 1915 model made of fabric treated with anti-gas chemicals. The hood was better than nothing, but it could not prevent over 180,000 casualties of gas during the war.

But while the field dressing kit and a gas hood aren't surprising, what about a pigeon carrying vest from WWII? Yes, pigeons were used during the Second World War; soldiers carried their flighty allies into action with a special vest attached to their kit. 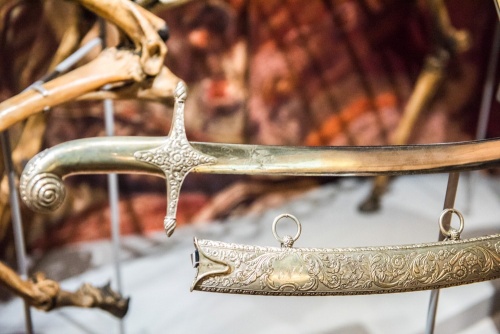 Look for a 1797 penny carried by a British soldier at the Battle of Waterloo in 1815. The penny is heavily dented from a French musket ball, but it stopped the ball and saved the soldier's life.

That's not the only item related to a narrow escape; see the hat worn by Thomas Hutton when he rode in the infamous Charge of the Light Brigade in the Crimean War. Hutton was wounded in the initial charge but survived to ride back through the 'Valley of Death' where he was wounded again.

Another display looks at the Earl of Uxbridge at Waterloo. The Earl was badly wounded and had to have his leg amputated. According to the exhibit, 'The Earl remained composed throughout the operation and his only comment was that the saw 'appeared somewhat blunt'. The 'somewhat blunt' saw is on display as are the bloodstained glove and handkerchief used by the Earl's aide Thomas Wildman to stem the blood flow as he helped the surgeon.

There are several exhibits linked to Napoleon, including his 'shamshir, a Middle Eastern curved sword used by by the French leader during his Egyptian campaign. There is also a lock of Napoleon's hair brought back from St Helena where he died in 1827. 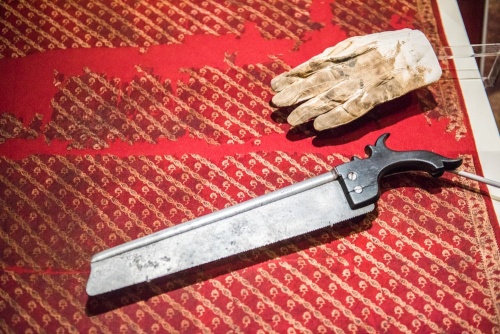 The Earl of Uxbridge's amputation saw, handkerchief and glove

The museum includes several examples of historical documents related to specific campaigns, including a 1642 warrant issued by King Charles II to raise his own regiment, the Lifeguards. More modern objects include a section of the Berlin Wall and a full kit carried by a modern soldier.

Perhaps the most iconic item in the museum is a wooden sign erected at Hellfire Corner, an exposed section of WWI trench near Ypres. It became known as 'the most dangerous corner on Earth', because any soldier passing through the junction was exposed to a hail of fire from German gunners.

I found the National Army Museum moving and thought-provoking. It deserves more attention as one of the best military museums in London.

The museum is immediately south-west of the royal Chelsea hospital (home of the Chelsea Pensioners) on Royal Hospital Road. The nearest underground station is Sloane Square. From the station exit turn left on Lower Sloane Street, cross over the road, then turn right onto Royal Hospital Road. You will pass the gates of the Hospital before reaching the museum on your left. From the underground station to the museum entrance is a 10-15 minute walk. 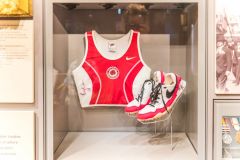 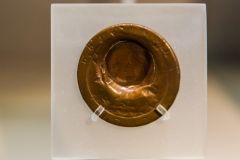 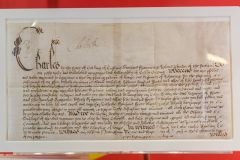 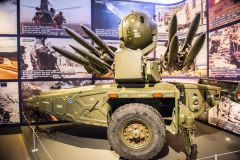 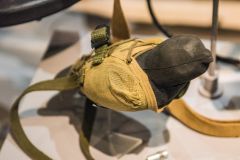 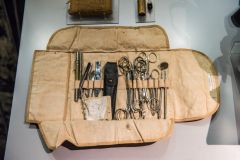 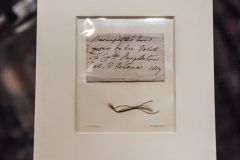