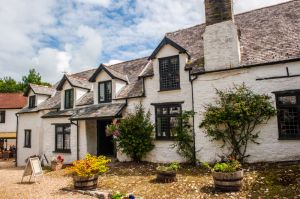 A true treasure of England's past, Chambercombe Manor was built in the 11th century and was mentioned in the Domesday Book. Elizabethan furniture shares the interior with later Victorian decor. Lady Jane Grey is known to have visited the house.

The earliest written record of Chambercombe comes from shortly after the Norman Conquest when Robert Fitzroy held the manor. The next name to appear in the history books was Sir Henry Champernon, lord of Ilfracombe, who owned the estate in 1162. The Champernon family owned the Chambercombe estate until the 15th century. When the family line died out the property passed through numerous hands until it came to the Greys, Dukes of Suffolk.

Duke Henry was the father of Lady Jane Grey, the 'Nine Days Queen', and Lady Jane almost certainly visited the house. When the Duke was executed for treason, the house was seized by the crown. Over time it dwindled in importance, passing from an impressive manor to become little more than a farmhouse. Though it suffered over centuries of neglect, many of the original medieval features remain, including a Tudor bedroom with a barrel-vaulted ceiling and a decorative plasterwork frieze.

The manor is supposedly haunted; in 1738 a secret room was discovered beside Lady Jane Grey's chamber, and legend says that a body lay upon a bed in the hidden room. The skeleton was thought to be that of a noblewoman who was shipwrecked off Hele. She was brought into the house, where she died.

Rather than announce the death, the family took her jewels and sealed the room. Though visitors cannot go into the Haunted Room, a section of the wall has been removed so you can see inside. The Manor hosts regular Paranormal events if you'd like to delve a little deeper into ghostly goings-on at Chambercombe! 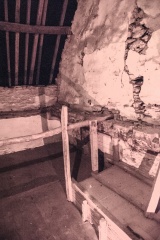 Without question, this was one of the most enjoyable guided tours of a historic house I have ever enjoyed. For a start, we were not just allowed but encouraged to take photos and ask questions. Or, as our guide put it; 'we try to be everything the National Trust isn't'. Though perhaps unkind to the Trust, that does rather sum up the relaxed, informal, and friendly atmosphere at Chambercombe!

The guide was a natural-born story-teller and took obvious delight in sharing her knowledge of the house and its history. She was very matter-of-fact about the ghostly goings-on at Chambercombe; she showed us the drawer handles that she regularly found up when she'd left them down, and pointed out areas where certain ghosts were regularly seen and heard.

The tour began with the hall, and there we learned about the extraordinarily long history of the house and the families who lived there over the centuries. She showed us several pieces of historical furniture including a medieval table and Tudor dresser, but the really interesting items were a pair of chairs by the fire, carved with peculiar figures including devils. We peeked up an exceedingly steep set of stairs off the hall which was said to be haunted - unfortunately, the stairs were too steep to lead a tour group up!

Next, we climbed to the first floor and a trio of bedchambers. The first chamber was supposed to be haunted by a small girl who had died of consumption here. According to our guide, a figure of the girl is often seen at the window of the chamber, looking out at visitors approaching the house. Other visitors have reported seeing a girl in period costume in the gardens, and complimented the staff on the nice touch of having a costumed actor add to the atmosphere, only to be informed that Chambercombe does not use costumed actors. 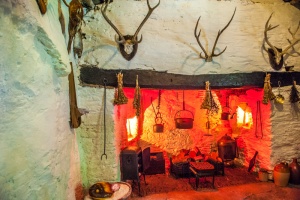 The second bedchamber is linked with Lady Jane Grey, who is known to have visited the house. The chair beside the bed is thought to be hers, though no evidence supports the tradition that she used it. It was here that the guide told us the most fascinating story of all the strange goings-on at Chambercombe; the tale of William Outway, a 16th-century tenant of the house. Outway had a daughter named Kate who married an Irish sea captain named Wallace.

Years later, William helped treat survivors of a ship that had gone aground on the treacherous coast nearby. He found a woman amid the rocks, so badly disfigured by the pounding of the waves that her features were unrecognisable. Stirred with pity, he brought her to Chambercombe and lay her in a bed.

Despite his efforts, the woman died, but when Outway and his wife searched her belongings they found gold coins and jewels, enough to enable them to purchase the house outright. The temptation proved too great, so they took the money and sealed the woman's skeleton in the bedchamber. Only later did they learn by accident that the woman sealed in their now hidden bedchamber was their own daughter Kate, come to visit her childhood home.

It was over a century later that the owner of Chambercombe discovered the hidden chamber and Kate Wallace's skeleton. Kate's ghost is said to haunt the chamber and her moans are sometimes heard.

It was a spooky tale, and though I didn't experience anything otherworldly, I couldn't resist a bit of an uncomfortable shiver peering into the Haunted Room.

From there we leapt forward several centuries to a Victorian bedroom, then to the original kitchen area, complete with a huge fireplace with bread ovens built into the side walls. And yes, there's a ghost story about the kitchen, too. Apparently, the spectre of a small boy can sometimes be found seated on a shelf set into the wall of the fireplace. The fireplace is linked to a small chapel, simply furnished, and from there a set of steps lead back to the hall.

After visiting the house interior, take some time to explore the gardens. There is a small 'secret garden' immediately behind the house, and a trail leads through attractive woodland to a larger formal garden further from the house.

Chambercombe is an absolute delight; one of the most enjoyable historic houses I've ever visited. The house is full of historical furnishings that really bring home the long and rich history of the house and its owners.

Note that admission to Chambercombe is by pre-booked private tour only. 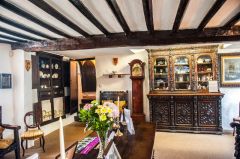 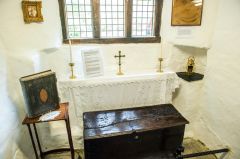 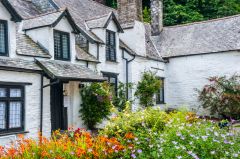 More self catering near Chambercombe Manor >> 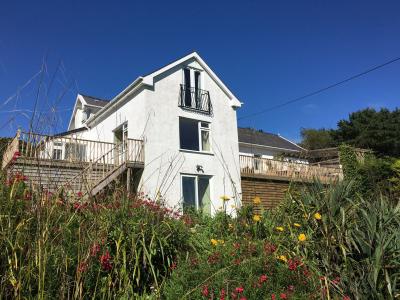 A detached cottage on the outskirts of Ilfracombe in Devon, it can sleep eight people in four bedrooms.
Sleeps 10 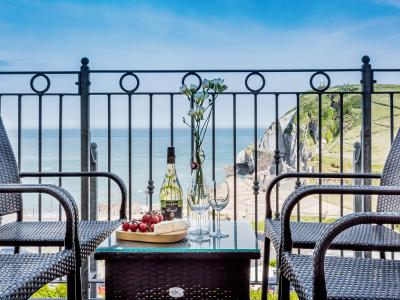 This luxury second floor apartment is in the coastal town of Ilfracombe in North Devon and can sleep four people in two bedrooms.
Sleeps 4