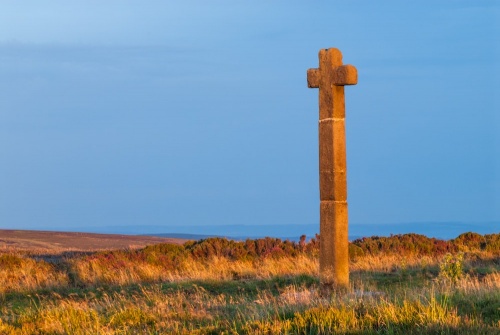 At the meeting of two moorland roads on Danby High Moor in the heart of the North York Moors stands a wayside cross known as Young Ralph Cross. The cross is such an icon of the local landscape that it has been adopted as the symbol of the National Park.

The first written record of Young Ralph Cross comes from the first part of the 13th century.

The cross is roughly ten feet high and stands on a square stone base. No one is clear how old it is; some historians think that the cross is as old as the 11th century, while others suggest that the cross head is from the 18th century, though they admit that the base could well be much older. You can [barely] make out very weathered interlace carvings and a cable-moulded border on the lowest section of the shaft. 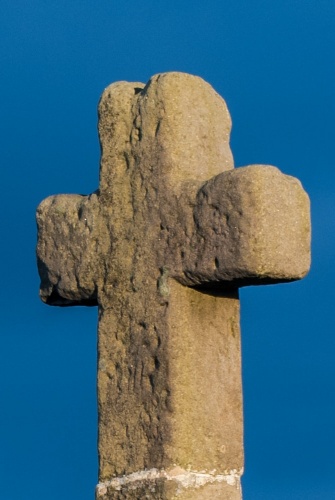 The cross head with
the 'alms hollow'

It seems clear that there as a timber cross here as early as the late Saxon period. The cross once had a letter 'R' carved on the south face, though no trace of this remains. the cross is made of gritstone

The cross was damaged by vandals in the 1960s, and in 1985 it was restored by local volunteers who carved a new middle section from locally quarried stone and reassembled the cross at the English Heritage masonry workshop at Mount Grace Priory near Osmotherley. The volunteers inserted a piece of metal to strengthen the cross shaft sections. 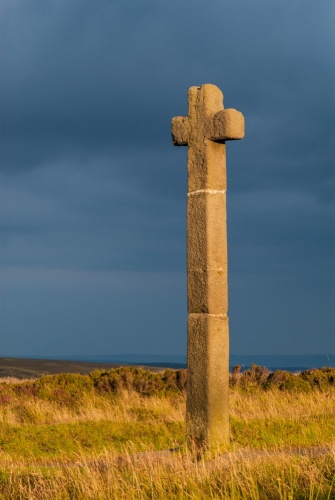 Young Ralph Cross is so named to distinguish it from Old Ralph Cross, about 200 yards to the south west. The 'Old' cross is much smaller at roughly five feet high. It is thought to date to the 13th century and is said to be a memorial to Ralph de Irton, the Prior of Guisborough from 1262, who was elected Bishop of Carlisle in 1280.

Several old folk tales cling to Young Ralph Cross. One of the most often told says that the cross marks the final resting place of a nun from Rosedale Priory and a monk from Farndale. The two met at the cross and enjoyed an illicit liaison before they were discovered by their superiors and possibly put to death.

Another tale says that a farmer named Ralph from nearby Danby discovered the body of a poor traveller who had starved to death at this spot. He was so moved by the fate of the unfortunate man that he erected the crossed in his memory and vowed that such a dreadful fate would not befall anyone else. 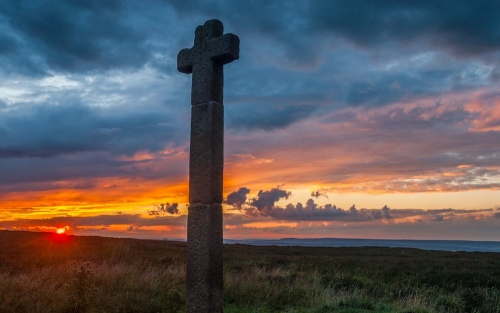 The cross at sunset

He made a hollow in the top of the cross and encouraged wealthy travellers on horseback to place a few coins in the hollow for those less fortunate than themselves. Poor travellers reaching the cross could then take a coin and buy themselves a meal at the nearest pub. Even if you aren't mounted on a horse you can easily see the hollow place on top of the cross, looking like a small notch in our photos.

Modern visitors still leave offerings at Young Ralph Cross, though now they put flowers around the cross base. 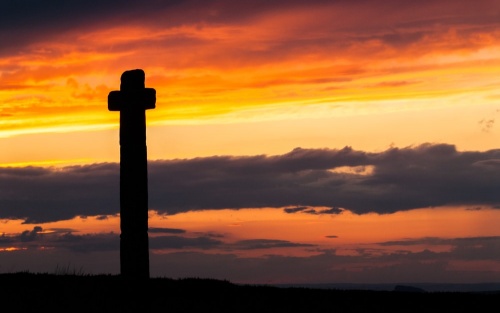 The cross silhouetted against the setting sun

Young Ralph Cross is immediately left of the minor road over the moors from Hutton-le-Hole to Castleton. You will find it a few steps south of where the road forks north-west to Westerdale. There are no signposts and no obvious place to park, but you really can't miss the cross. Despite the lack of a parking area it is very easy to just pull off onto the verge. Old Ralph Cross is on private land a few hundred yards to the south west.