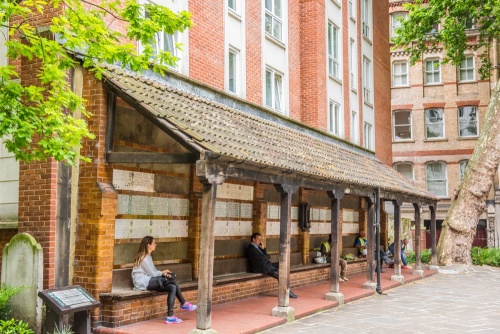 In a quiet green space near St Paul's Cathedral is Postman's Park, so named because it was used as a lunchtime garden by workers at the old General Post Ofice. The park played a key role in the 2004 film 'Closer'.

Postman's Park is best known for the Watts Memorial. This memorial was a concept by sculptor GF Watts, who wanted to commemorate brave, selfless deeds. Watts (1817-1904) was a wealthy artist but also a radical socialist and a philanthropist. He was strongly interested in the plight of London's working classes and tried to raise awareness of their terrible living conditions.

In 1897 he wrote a letter to The Times proposing a memorial to commemorate acts of selfless heroism by 'heroic men and women' who had died whilst attempting to help others. The memorial was intended to commemorate Queen Victoria's Golden Jubilee.

The result is a memorial composed of a long wall, or gallery, under a canopy on which are arranged rows of glazed Doulton tile plaques, each one commemorating a deed of heroism. 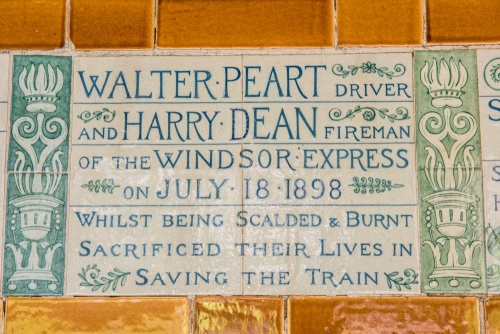 One of the Watts Memorial plaques

Here you will find examples of people who saved children by running into burning buildings or dived into the water to save a drowning friend but were themselves killed in the attempt. It's a strangely affecting memorial, full of Victorian sentiment, but made all the more powerful because of its simplicity. Here's an example:

Mary Rodgers, Stewardess of the Stella, March 30, 1899, Self Sacrificed by Giving up her life belt and voluntarily going down in the sinking ship.

Another example commemorates a railway signalman named William Goodrum, who on 28 February 1880 lost his life at Kingsland Road Bridge 'in saving a workman from death under the approaching train from Kew'.

Nearby is a plaque to Samuel Rabbeth, a medical officer of the Royal Free Hospital who 'tried to save a child suffering from diphtheria at the cost of his own life' on 26 October 1884.

The plaques are poignant, sad, and inspiring all at once. It is both heartening and tragic to read these tales of individual heroism. 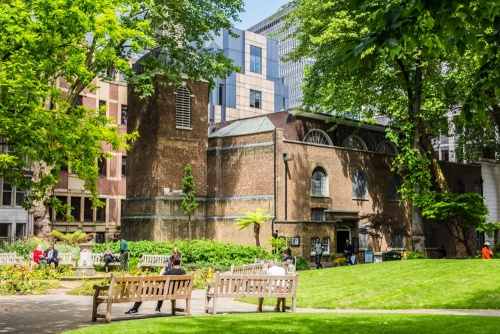 St Botolph without Aldersgate occupies a corner of the park

Beside the Watts Memorial, a group of gravestones lean against a wall. These are reminders of the days when Postman's Park belonged to the churches of St Leonards, Foster Lane, St Botolph without Aldersgate, and Christ Church, Newgate Street. St Botolph's occupies one corner of the park and is well worth visiting for its 1788 organ and the grave of Lady Anne Peckington (d 1563).

A modern stained glass window commemorates John Wesley, the founder of Methodism. Wesley became a Christian in a house opposite the church and is known to have preached in Postman's Park on several occasions.

Also in the park is a sundial in the centre of brightly coloured flower beds and a water fountain. The flower beds are planted with some unusual species including dove trees, bananas, and musa basjoo.

Postman's Park is free to enter and can be hired for family and corporate events and receptions. 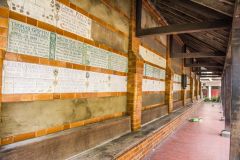 More self catering near Postman's Park >>