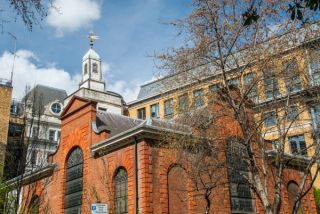 St Anne and St Agnes is a small gem of a church opposite Postman's Park, rebuilt by Sir Christopher Wren after the Great Fire of London.

The first written record of a church here comes from 1137, and early medieval records seem to be confused over the dedication, sometimes referring to St Anne-in-the-Willows, and sometimes to St Agnes. The double-dedication became commonly used only in the 15th century.

Fire was always a danger to medieval and Tudor buildings, and in 1548 St Anne and St Agnes was devastated by fire. It was rebuilt, and extended in 1624, but disaster struck in 1666 when the Great Fire of London almost completely destroyed the Tudor building. Only part of the 14th century survived the blaze. Sir Christopher Wren built a new church in 1680, incorporating what was left of the tower. Unusually for a Wren church, the design was based on a Greek cross, and the main material was red brick rather than stone. The ceiling is beautifully decorated, contrasting with dark oak furniture.

John Wesley preached here twice, and famous people who lived in the parish include the poet John Milton and the author John Bunyan.

St Anne and St Agnes was badly damaged by German bombs on 29-30 1940, and only reopened in 1966, when it served as a Lutheran church for the Latvian and Estonian communities in London.

The interior is a mix of styles, with some features copied from the pre-war building, and other fittings brought to the church from other London churches not rebuilt after the war.

The Lutheran congregation moved to a new church in 2013, and the church is now home to the musical charity the VOCES8 Foundation, which promotes vocal music, particularly amongst young people. The church is frequently open to visitors on the first Wednesday of every month from 11:45 until 14:45 through the Friends of City Churches charity, but it is a good idea to check the official website for current opening dates before making plans to visit. 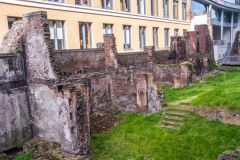 More self catering near St Anne and St Agnes Church >>