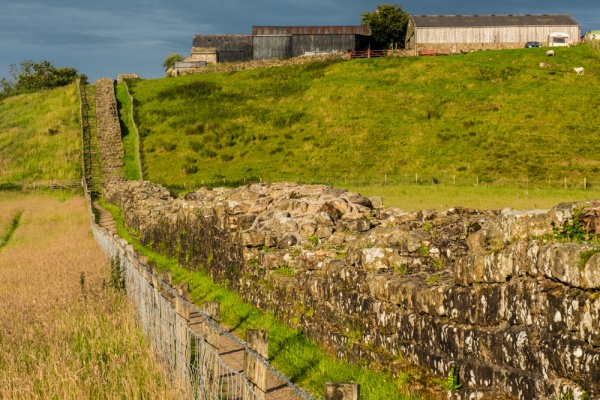 Just west of Gilsland village a farm track leads to Willowford Farm, following the course of Hadrian's Wall. The Willowford section of the Wall stretches 2999 feet in length and includes the remains of two turrets and a Roman bridge used to carry Hadrian's Wall over the River Irthing.

The wall is only 2.2 metres wide in this section and stands on a 3-metre wide foundation. It stands to an average of 1.4 metres in height.

That's just an average height though, and in several places, it was well over our heads as we walked beside it. Near Willowford Farm it reaches a height of 2.8 metres.

This section of the Wall clearly shows how the design was altered during construction. When building began in AD 122 the Wall was laid out with a 3-metre wide foundation (10 Roman feet), with 3 courses of stone. This initial phase is known as The Broad Wall. Before the wall was finished the design was changed, and the width was reduced to 2.2 metes (8 Roman feet). You can clearly see this discrepancy in size as you follow the Wall towards the river.

The turrets were built during the initial construction phase of the Wall and stood 4 storeys high. They seem to have been abandoned in the 3rd century, though unlike other disused turrets along the Wall they were not pulled down, but remained intact.

The easiest place to access the Willowford stretch of the Wall is from the free parking area at the west edge of Gilsland village, signposted to Chapel Burn and Low Row. The same parking area gives good access to Poltross Burn milecastle to the east. From the car park simply cross the road to the farm track opposite, and go over a cattle grid following the arrows for Hadrian's Wall Path. The Wall is easy to see directly ahead of you.

The farm track leads beside the Wall, past the remains of a turret, marked on Ordnance Survey maps as Turret 48A. This is one of the best-preserved turrets along the Wall. It is 4.15 metres wide and the highest section of wall is 1.85 metres high. The turret is set into the thickness of Hadrian's Wall to a greater extent than most other turrets, resulting in a relatively thin front wall.

Hadrian's Wall is in exceptionally good condition along this stretch. After 10 minutes you will come to the second turret, 48B, just before you reach the farm. This is less intact than Turret 48A, probably because stone was robbed to build farm buildings over the centuries. Set into a stone barn immediately beside the footpath is a re-used Roman stone, inscribed with the Latin

The inscription translates as,

From the Fifth Cohort
The Century of Gellius
Philippus Built This

This is a form of 'century stone', recording which soldiers under which centurion was responsible for building each section of the Wall. You can see many more century stones on the section of Wall running towards Birdoswald on the west bank of the Irtting.

From the farm, the Wall runs over the edge of a steep bank and descends to the remains of a bridge abutment on the east bank of the River Irthing (see our entry under Willowford Bridge). From the Gilsland parking area to the river should take no more than 12-15 minutes. If you fancy a longer walk I highly recommend carrying on across the river and up the far bank to Milecastle 49, following one of the best-preserved sections of Hadrian's Wall to Birdoswald Fort. 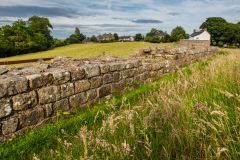 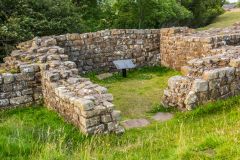 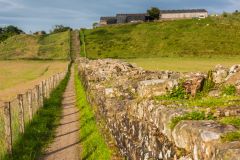 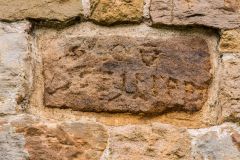 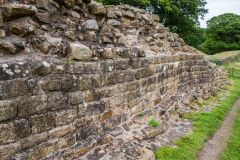 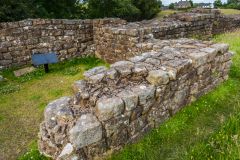