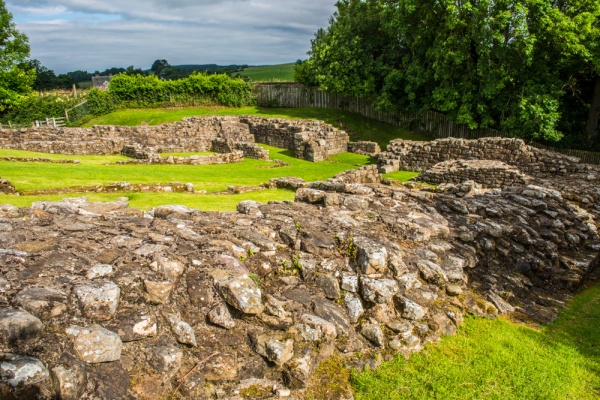 Poltross Burn is one of the best-preserved milecastles along Hadrian's Wall. The interior is 21.5 metres by 18.5 metres in size, and within the milecastle are remains of an oven and a section of a stair leading up to the ramparts of the Wall.

Poltross Burn Milecastle is also known as Milecastle 48 and for centuries was known locally as 'The King's Stables'.

Poltross Burn milecastle is located directly on the course of the Hadrian's Wall Path, on the southwest edge of Gilsland village. Probably the easiest way to access the milecastle is to park at the free car park on the B6318, on the western fringe of the village. From there the footpath leads over the small burn and up to a railroad crossing. Cross over the tracks carefully, and follow the trail down to the milecastle. The site is on the western side of the stream.

When we visited, the bridge across the stream had been damaged by floods, so we had no choice but to access it from the wet! Luckily it's just a short walk, no more than five minutes from the car park.

Unfortunately, there was no information panel to explain the layout of the site or the surviving features, but the Romans tended to follow a standard design for their forts and turrets along the Wall, and Poltross Burn is very similar to milecastles like Harrows Scar to the west, although it is unusually large by comparison to most milecastles.

Unusual features that we didn't find at many other milecastles include an oven and a striking set of stairs giving access to the parapet walk. The stairs are remarkably wide. So much of the stairs survive that archaeologists have been able to use them to calculate the original height of the parapet walk as being about 3.6 metres high (almost 12 feet). If that is true, then the original parapet height must have been over 15 feet high.

Within the perimeter walls are a pair of barrack blocks, with a small gutter, or waste channel, running down one side. The barracks are arranged on either side of a road running through the fort from a gateway through the wall on the north side to a matching gateway on the south side.

While we were exploring the site a train rumbled along the track that runs immediately above the milecastle. It was quite a sight to see the modern streamlined train hurtle past the ancient Roman stones. 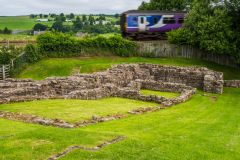 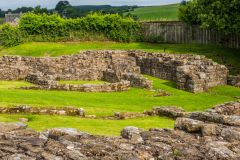 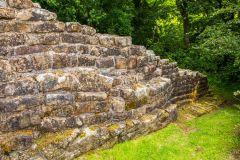 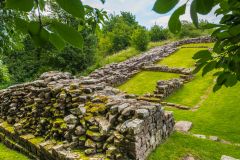 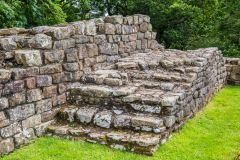 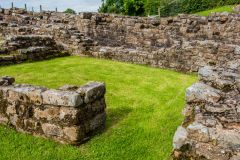