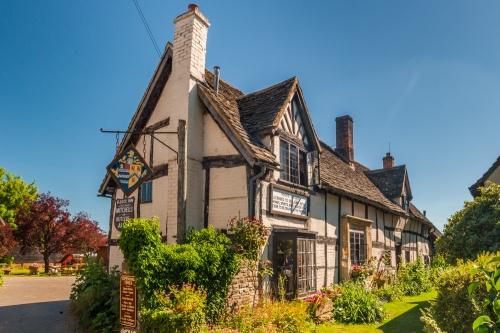 The Fleece Inn is a beautiful 'black and white' timber-framed inn, dating back to the Middle Ages. The Inn was originally a farmhouse, where the farmer and his livestock both lived under the same roof. It became a village inn in 1848, a role it still fulfils.

The Fleece Inn was built in the late 15th century as a traditional longhouse, with both humans and livestock living under the same roof. The builder was a yeoman farmer named Byrd, and the Byrd family owned the building until it was given to the National Trust in 1977.

It is worth remembering when planning a visit that the Fleece Inn is a working pub, rather than a normal tourist attraction. The inn is open during regular pub hours (at this writing 10-11 Monday - Sunday).

The Fleece frequently acts as a venue for folk music and morris dancing, with three Morris dancing 'sides' based at the Fleece. It also holds an annual asparagus festival and has regular asparagus auctions.

There is a collection of historic pewter on view inside the inn. The pewter dinner service was traditionally said to have belonged to Oliver Cromwell, who supposedly exchanged the set while travelling to the Battle of Worcester in 1651. The story is now thought to be untrue, but shouldn't detract from what is a lovely display of historical pewter ware. 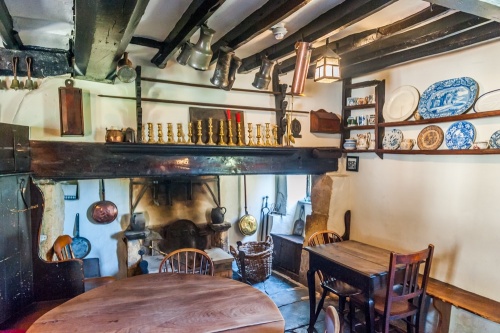 Look for the 'witches circles', designed to ward off evil. The circles are drawn in chalk in front of each hearth, and are supposed to prevent witches entering the house through the chimneys. There are also witches marks inside the door, again thought to keep evil away.

Entering the interior is like stepping back in time, with age-darkened beams overhead. We enjoyed the old parlour, with its original fireplace and high-backed benches to keep the heat in. Outside, facing the inn entrance, is a thatched medieval barn, used as a venue for private parties and weddings.

Our family really enjoyed The Fleece; quite apart from its history, the service was friendly and we had a lovely cold drink on a hot summer day. It really is a quintessentially English country pub.

Bretforton itself is well worth a look. There are a number of attractive timber-framed cottages a short stroll from the Fleece Inn, including several thatched houses, and the 12th-century parish church of St Leonards is a wonderful historical building. 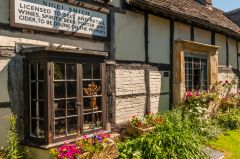 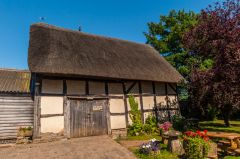 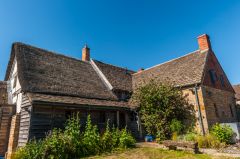 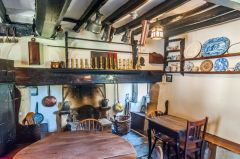 More self catering near Fleece Inn >>

This lovely studio accommodation is situated in Bretforton, Worcestershire and can sleep two people in one bedroom.
Sleeps 2

This studio lodge is located in Bretforton, Worcestershire and can sleep two people in one bedroom.
Sleeps 2