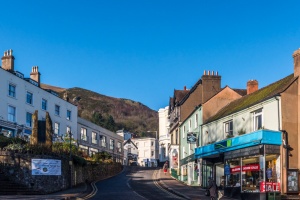 Variously known as Great Malvern and Malvern Spa, the town of Malvern nestles on the flanks of the Malvern Hills, surrounded by a plethora of other "Malverns" such as Little Malvern, Malvern Link, North Malvern, and Malvern Wells. The name "Malvern" is derived from the Celtic term for "bare hill", which tells you something about the geology of the Hills above the Malverns.

Inhabitants of Malvern develop strong legs, for the town rises and falls 500 feet over its length. The hills above are easily reached by a variety of footpaths, and leaflets detailing local walks are readily available at the Tourist Information Centre and most hotels and B&Bs in the area.

Malvern owes its prosperity to the development of hydrotherapy treatment at the spa here in the late 18th century. Visitors such as Queen Victoria and the poet Tennyson have flocked here ever since.

From an earlier era is the magnificent priory church of St. Mary and St. Michael, which dates from the Norman period. The nave retains its Norman character, while the exterior is largely a product of the Perpendicular period.

The most remarkable aspect of the church is its wonderful collection of over 1000 medieval tiles, the finest in all of England. The tiles, based on over 100 different designs, were hand-made at the monastery. Also notable is the original stained glass, said to rival that of York Minster (high praise indeed!).

That the church has survived at all is remarkable; destruction had already begun during the Dissolution of the Monasteries when the townsfolk paid the then princely sum of £20 to save the remainder of the building from Henry VIII's men.

Malvern hosts an annual festival of drama that was a favourite of George Bernard Shaw's. Many of Shaw's works have been performed here over the years, and the playwright was long a familiar figure in the town.

In the churchyard of St. Wulfstan's lies Edward Elgar, a native of Worcester, one of the most prominent English composers of the 20th century.

NEARBY ATTRACTIONS:
Little Malvern: an attractive town that boasts the remains of a fine priory church.
Madresfield Court: A moated Elizabethan house in lovely parkland.
Malvern Hills: excellent walking can be had in the hills, which also contain several prehistoric sites of interest.

More self catering near Malvern

More bed and breakfasts near Malvern

Self Catering near Malvern