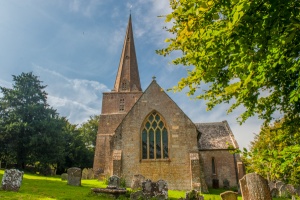 The earliest parts of Saintbury's redundant parish church date to the 13th century, but there are obvious reminders of a much older church scattered about this delightful building.

The south door is Norman, with a rounded arch and roll-moulding with a tympanum carved with lozenge patterns. The arch makes a lovely contrast with the oak door, with ironwork created by the Campden Guild in Arts and Crafts style.

Though the door is interesting, it is what stands above it that really deserves attention; a grotesque carving of a face. Grotesques are often seen decorating the exterior of a church or used as corbel heads, but why over the doorway? One theory is that the grimacing face was meant to warn worshippers to be on their best behaviour in church.

Set into the south wall of the nave is a blocked Norman with a tympanum carved in a lozenge pattern. Even more interesting is what is set above the Norman arch; a Saxon sundial, carved some time before 1050. This is in the form of a circle with three radii to indicate service times for Mass, Sext, and Complines. 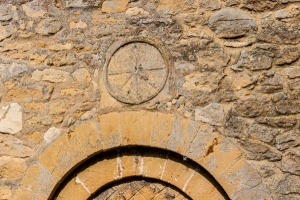 The Saxon sundial
The west window is a lovely piece of Perpendicular work, probably 15th century, as is the nave roof.

The 16th century font is rather curious; it is carved with decoration from 3 distinct periods; billet ornament from the Norman period, Early English dog-tooth decoration, and Tudor roses.

One of the oddest features at Saintbury is a stone slab found in the south transept, now used as a bell-chamber. This odd slab is octagonal in shape, but no one knows what it was used for.

High on the wall is a royal coat of arms to Queen Anne, probably dating to about 1709. Also from Queen Anne's reign is the chancel screen. There is a good Jacobean Communion table in the north transept, and under the table is the original medieval stone altar, or mensa. The altar stone was hidden under the Communion table during the Commonwealth period, when all stone altars were ordered destroyed by the Puritan leadership. 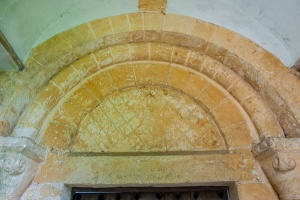 There is a very odd stone set sideways in a window splay in the chancel. This stone figure may be a Sheila-na-gig; a Celtic fertility figure. What it is doing in the chancel is a mystery. Providing light to the chancel is an early 20th-century Corona designed by Arts and Craft leader CR Ashbee. Ashbee was social reformer and architect, and a leading figure in the Arts and Crafts movement.

The sanctuary rails are early 16th century, and on either side of the altar are Arts and Crafts style candle holders carved from oak by the Campden Guild. There is a very unusual double piscina with a shelf halfway up, probably dating to the reign of Edward I (1272-1307). Next to the piscina is a fanciful monument to William Warburton (1578-1649). This monument originally stood in the Parsonage house.

The east window is probably 14th century, but the glass is even earlier, probably late 13th or early 14th century. The two main lancets show a pair of 14th century figures under a canopy, with Edward I's wife, Queen Eleanor of Castile. On the left is a figure of a monk, on the right a bishop, possibly representing the patron saint of Saintbury, St Nicholas. 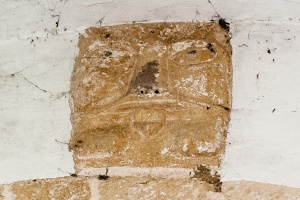 One of the most interesting historic features at Saintbury is also one of the most recent discoveries to be revealed. Within the past few years a set of 1634 wall paintings has been revealed in the chancel, depicting text from the King James Bible, which at that time had only been in print for 20 years.

Saintbury is a treasure; a wonderful medieval church with so many fascinating historical features that it is hard to mention them all. The church is set in a picture-perfect Cotswold village, with honey-toned cottages.

The church is in the care of the Churches Conservation Trust, and as of this writing, no permanent arrangement appears to have been made for a keyholder. It is a good idea to check current opening times at the CCT website before making a trip. We took advantage of an advertised opening day to visit, and I'm so glad we did! 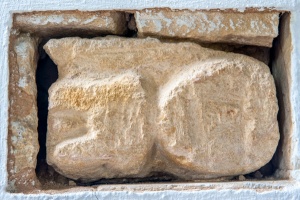 Sheila-na-gig carving in the chancel 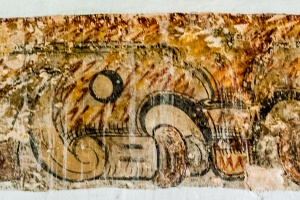 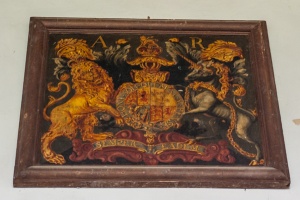 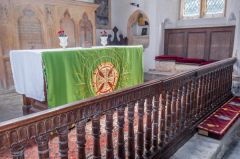