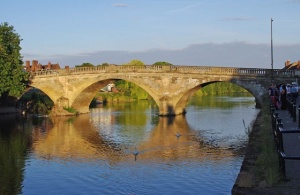 Bewdley bridge
Bewdley is an attractive town standing on the banks of the River Severn, at the very edge of the Wyre Forest. At one time Bewdley was an important inland harbour, and its former prosperity is reflected in an abundance of attractive 18th-century buildings. The bridge across the Severn, built in 1798, is the work of noted civil engineer Thomas Telford, who was also responsible for the Severn Suspension Bridge.

Though the character of the town is largely Georgian, there are several interesting earlier buildings, including Tudor and Jacobean half-timbered houses, such as the Recorder's House on the high street, and Wyre Court.

The present parish church is yet another Georgian building, while the original Norman church is in the grounds of Ribbesford House, one mile away. That church is notable for its 14th-century wooden arcade arches, a surviving Norman tympanum, and a Victorian window by Arts and Crafts masters William Morris and Edward Burne-Jones.

On the hill above Bewdley is Tickenhill House (variously called Tickenhill Palace or Manor), once a royal Tudor palace, though now a Georgian brick facade fronts the Tudor remains. In 1499 the palace was the site of Prince Arthur's marriage by proxy to Catherine of Aragon, and later Catherine's daughter Mary, later Mary I, stayed at the palace. The park surrounding the house has been established since at least the 14th century.

The Shambles, a former butcher's market beneath the Town Hall, now houses the Bewdley Crafts Museum. The Museum hosts ongoing events aimed at promoting an appreciation of local traditions and crafts, including coracle making.

The Bewdley Civic Society has created a useful Town Trail, taking in many of Bewdley's historic buildings. For more information see the Bewdley village website.

More self catering near Bewdley

More bed and breakfasts near Bewdley

Self Catering near Bewdley

The Stilehouse Apartment
Bewdley
Sleeps 2, from £264.00