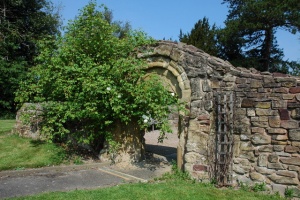 Beside the rectory of this attractive town stand the ruins of a Norman church, built upon an even older Saxon foundation. The more modern 19th-century church is graced with a 160 foot high clock tower.

The current church dates to the 12th century but may stand on the same site as a Saxon church. In the 14th century, the Norman church was extended, the roof raised, and a spire erected to top the west tower.

Unfortunately, the foundations proved inadequate for the extra weight, and by the 16th century, the walls had begun to bulge under the strain. The roof was lowered to its original Norman height, but the damage was already done; the church was in danger of complete collapse, so the new Victorian church of St Mary's was built to replace the ancient building.

In the 1960s the church was reduced to the chancel, with the remainder of the Norman building standing only as roofless walls.

Built in 1850 to replace the Norman church, this Victorian gem stands in a delightful location amid peaceful countryside.

To the south of the village are the Abberley Hills, including Woodbury Hill, with an ancient hill fort on its summit.

Just outside Abberley is Stockton, home of the Queen Anne mansion, The Elms, built by Gilbert White, a pupil of Christopher Wren. The Elms is now a hotel.

More self catering near Abberley

More bed and breakfasts near Abberley