HERITAGE HIGHLIGHTS:   One of the largest and most impressive medieval barns in England 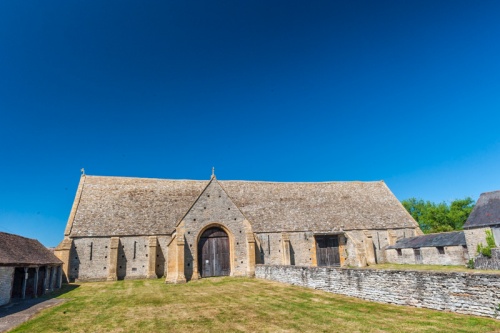 One of the finest tithe barns in the country, Middle Littleton is a Grade I listed barn dating to the 13th or 14th century (the National Trust dates it to around 1250, but the National Monument Records has it built in 1376 for the monks of Evesham Abbey).

For many years the most likely builder was thought to be John Omberseley, Abbot of Evesham in 1376. However, more recent dendrochronology testing has revealed that the barn was at least a century older than Omberseley's tenure, and dates to the middle of the 13th century.

The barn is constructed of blue lias stone and Cotswold stone dressing, with a roof of stone tiles. It stands 130 feet long and 42 feet wide, and originally had a pair of gabled porches on each of the long sides. It is truly a magnificent building, an imposing reminder of the power of the medieval abbeys.

There were originally two large porches, but only the south porch survives. The walls are supported by eight buttresses on the side wall and three on the end, marking the location of internal divisions.

The barn is built in a 'raised cruck' style. That is, the large cruck timbers are not supported directly on the ground but on raised stone walls. The walls are pitted with holes called putlogs, marking the spot where the carpenters and masons inserted scaffolding to build the structure.

Look for decorative finials over the gable ends. These were traditionally used as a good luck charm. The building stretches 42m long and is 10m wide. It is built of blue lias limestone dressed with Cotswold Marlstone, under a roof of stone slates. The slate range from 6 to 18 inches long are were held in place with wooden pegs, though these have been replaced with pegs of aluminium.

The barn is accessed through a farmyard. It isn't terribly well signposted, but Middle Littleton is a small village, so you shouldn't really have any trouble finding it. The barn stands near the manor house, and across a field from the parish church. The combination of these historic buildings in one place makes a lovely picture; a perfect example of traditional English village life over the centuries.

I've visited numerous medieval barns before, and was prepared to be impressed, but even so, my first glimpse of the Middle Littleton barn was accompanied by an exclamation of 'wow!'. The sheer scale of the building is awe-inspiring. It is simply huge; easily the size of several medieval country churches put together.

On one side of a courtyard are lean-to farm buildings, and on the other is an old cider press building, with exterior stone steps leading to the first-floor entrance. This area has a long tradition of growing fruit, so it is very likely that villagers often paid tithes in apples, pears, or similar fruit.

It is easy to combine a visit to Middle Littleton with a trip to see nearby Croome Park or the Fleece Inn in Bretforton, both National Trust properties. 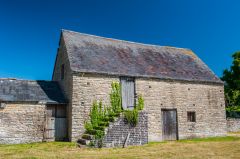 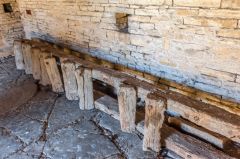 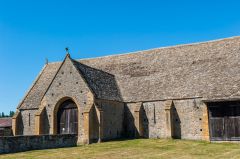 This detached bungalow is situated on the outskirts of Evesham and sleeps three people in two bedrooms.
Sleeps 3 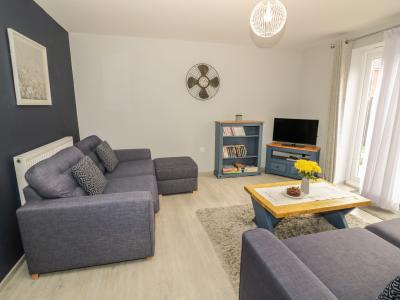 This detached cottage rests in Evesham, Worcestershire and can sleep six people in three bedrooms.
Sleeps 6