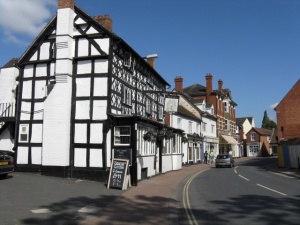 Tenbury Wells is an attractive town situated in the northwest corner of Worcestershire near the borders of Herefordshire and Shropshire. Tenbury lies on the River Teme, in an area known for growing hops and cider apples. For this reason Tenbury has been called the "The Town in the Orchard".

As its name would suggest, Tenbury was a spa town, popular from about 1840 onward for its unusual saline waters (i.e. "salty"). This spa heritage is reflected in the architecture of Tenbury, which is largely Victorian.

Chief among these is Tenbury Spa, designed in unusual "Chinese Gothic" style by James Cranston. The spa, or Pump Room, was worthy of note as one of the earliest examples of a prefabricated building; it was made in Birmingham of a prefabricated iron framework and reassembled in Tenbury.

Within the largely 19th century St. Mary's church are the remains of a Saxon cross, and the town itself contains several half-timbered buildings from the 16th and 17th centuries.

A popular annual event is the national Mistletoe and Holly Auctions, held on Tuesdays before Christmas.

More self catering near Tenbury Wells

Self Catering near Tenbury Wells