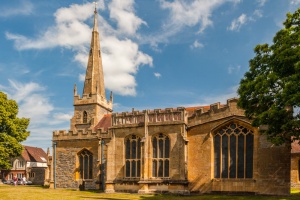 All Saints church was originally built in the 12th century as a chapel for the monks of Evesham Abbey. The original Norman building was completely rebuilt in the 15th century to create an excellent example of Perpendicular Gothic style. The most impressive feature is the 16th-century chantry chapel, built to house the tomb of Abbot Lichfield, the last Abbot of Evesham.

The church was heavily restored by architect Frederick Preedy in 1874. Preedy was known for his church restorations, and especially for his stained glass designs. At All Saints he designed eight stained-glass windows, the reredos, and pulpit. Look for the memorial plaque to Preedy's grandfather.

All Saints shares a churchyard with St Lawrence church, now redundant and in the care of the Churches Conservation Trust. Why the two churches were built so close together is a mystery, but one local tradition suggests that All Saints was built to serve the east area of Evesham, while St Lawrence served the west.

Behind All Saints is Evesham Abbey Bell Tower, all that survives of the abbey. The bell tower was built in 1530 by Abbot Lichfield, just 10 years before the Abbey was dissolved by Henry VIII. The tower was spared destruction when the townsfolk of Evesham bought it for themselves. 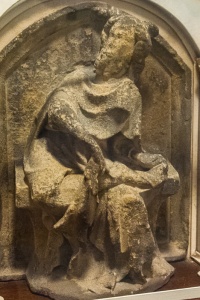 Curiously, All Saints offered a quite Puritan approach to worship after the Reformation, but in the 1870s a very High Church, Anglo-Catholic style was adopted. A century later when the parish of All Saints merged with that of St Lawrence a 'middle church' style was adopted as a compromise.

In the church porch, behind a dusty glass case, is a remarkable 13th-century carving, a figure of Moses with horns protruding from his head. The Horned Moses figure appears regularly in medieval art, the most famous example being Michelangelo's version in the church of S Pietro in Rome. The idea of Moses having horns comes from the Vulgate translation of the original Hebrew, which speaks of Moses having rays of light emanating from his head, like horns.

Also in the porch is a carving of a pelican feeding its young, and an angel carrying the coat of arms of Evesham Abbey. These two carvings were rescued from a house that was being torn down in 1908. They were originally set into a chimney breast, and you can still see burn marks on the stones.

It is quite extraordinary to see two such historic churches so close together; almost literally in each others' shadows. It is well worth exploring both churches, and do take the time to take the path behind the church, past the detached bell tower, to the site of the abbey, where you will find a memorial to Simon de Montfort. 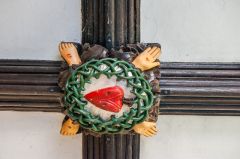 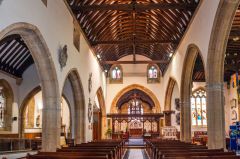 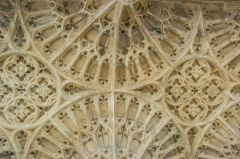 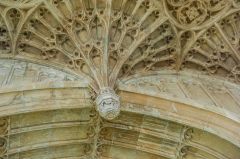 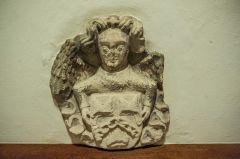 More self catering near Evesham, All Saints Church

More bed and breakfasts near Evesham, All Saints Church