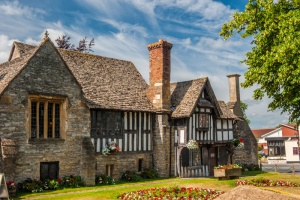 This attractive 14th century stone and timber-framed building was built for the almoner of Evesham Abbey. An almoner was a monk whose job it was to give alms to the poor and sick. He had a house beside the abbey gatehouse, so he could interact with people coming to the abbey without interrupting the rest of the monks.

When Henry VIII dissolved Evesham Abbey in 1539 the Almonry became a private dwelling for the last abbot, a man named Philip Ballard. The rest of the abbey buildings were sold to Sir Philip Hoby, who used the stone for building material.

The Almonry was later used as an inn, a tea room, a private house, and offices. Part of the building now houses the local tourist information centre, and the rest has used as a local history museum since 1957.

Behind the Almonry are the remains of the medieval abbey, once the third-largest in Britain. Surviving features include a pair of churches (All Saints and St Lawrence), a cloister arch, and a detached bell tower. 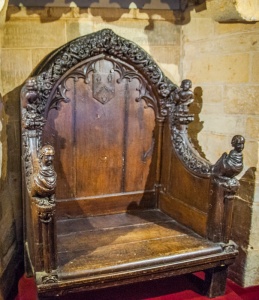 The museum is spread out over a dozen rooms in the historic Almonry, and include displays on Evesham Abbey, Simon de Montfort and the 1265 Battle of Evesham, Saxon finds in the area, Georgian costumes, gardening, and archaeology. There is a special exhibit on the impact that the two world wars had on the town of Evesham.

The range of objects on show is staggering, from fossils to historic farm implements to medical tools, old furniture to period photographs and artwork. There is a wonderful display of objects found in an Anglo-Saxon burial hoard.

Behind the museum is a beautifully restored garden, and still more historic objects under a lean-to shed. I spotted an old model horse from a fairground roundabout, old shop signs, and farm tools. There really are a treasure trove of historic artefacts, some jumbled together, so carefully displayed behind glass. Also in the garden area are a number of beautifully carved stones from Evesham Abbey.

In addition to local history displays, The Almonry also maintains a large archive, especially useful for tracing family history. The archives can be searched by appointment. 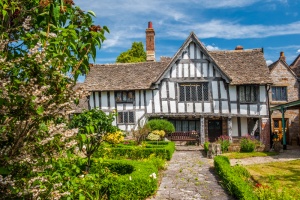 Quite apart from its role as a heritage museum The Almonry deserves attention for its wonderfully preserved architecture.

In addition to regular exhibits, the Almonry also acts as a gallery for local artists and has a regular programme of special events, particularly aimed at children. Recent events as of this writing include tracing the history of the building as a private dwelling, and a look at the life of Simon de Montfort.

You enter the Almonry through the TIC, and the tourist information staff double as admissions clerks for the museum. I had a couple of questions for the staff and they were extremely helpful, even giving me a map and showing me the best way to walk to the Battle of Evesham site.

After that I passed through a barrier into the museum proper, entering the old parlour of the Almonry, with a wonderful medieval fireplace. One of the most interesting objects on display here was a magnificently ornate, carved 14th-century chair used by the abbot of Evesham. Other objects from the abbey include several illuminated manuscripts.

You pass down a maze of passages, lined with historic tools and old photos. The interior of the Almonry is just what a medieval house should be, with dark oak beams and creaking floorboards. The building just exudes age and charm.

Do take your time; there's an awful lot to take in, and please don't miss the gardens, which, though small, offer a lovely, peaceful space to explore, and you can also get a good look at how the Almonry was constructed, with large oak timbers supported on stone foundation walls.

Don't even think about visiting Evesham without taking in The Almonry! 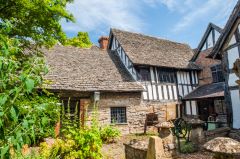 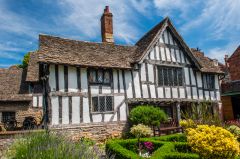 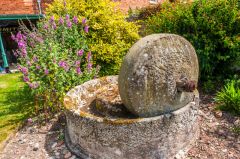 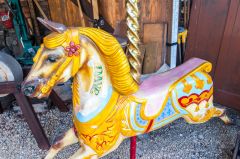 More self catering near The Almonry Heritage Centre Museum

More bed and breakfasts near The Almonry Heritage Centre Museum