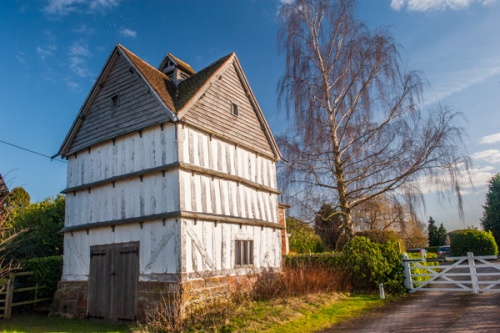 Hawford Dovecote is an attractive timber-framed 16th-century dovecote that once formed part of a monastic grange. The dovecote is built to an unusual design with a weatherboarded gable on each of its four sides, meeting in a central peak.

Hawford Dovecote is built on the site of an earlier medieval dovecote associated with the nearby Grange. The dovecote is constructed on stone foundations and is made of brick and timber-framing, with three rows of holes for birds to enter, protected by overlapping planks of wood.

Entrance is through a very large set of double doors on the north side. There are small attic window openings beneath the gable on each side. The floor is made of blue brick, and there are roughly 60 nesting boxes on the north wall and about 150 on the west wall at first-floor level.

There were originally three floors, but now the interior is open to the rafters. This has the benefit of allowing you to easily see how the roof was built. What makes Hawford's dovecote so attractive is that it has escaped alteration and remains essentially as it was built in the late 16th century. It truly is a picturesque building, with a striking and unusual design. The dovecote is listed Grade II* for its heritage interest.

The dovecote is located just off the A449, south of Ombersley. A minor road heads east from the A449 and within a few hundred yards you come to a junction. The dovecote is just to the right of the junction, beside Hawford Grange. There is no parking, so you'll have to find a spot to pull over along the verge. The dovecote stands immediately outside the Grange gates, but is easily accessible from the lane.

In theory, you can walk around the entire building, though when we visited in early March there were brambles encroaching on the rear of the structure, making it awkward, to say the least. You can, however, easily see two sides without any trouble, and gain access to the interior.

I found the interior quite unusual; I expected to see rows of nesting boxes, as at nearby Wichenford (also National Trust), but there were no nesting boxes at ground level. What you find instead is a beautifully timber-framed interior, with low floor joists above your head. The floor is open in the middle so you can look up through the joists to the cupola high above where the birds enter in.

The birds can also enter through slots in the walls, and there is a row of nesting boxes on the first floor, formed by wooden slats. It's a very curious interior, and I can't help but wonder if it has been altered at some point in its history.

A visit to both Hawford and Wichenford dovecotes can easily be combined with a trip to see Hanbury Hall. 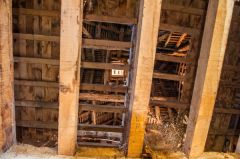 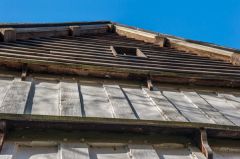 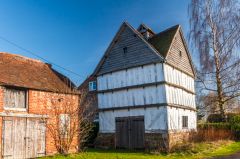 More self catering near Hawford Dovecote >>