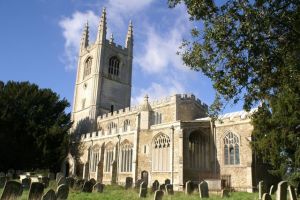 The building consists of an aisled nave, chancel with north and south chapels, and a west tower with 17th-century pinnacles. The body of the church is rubble and cobble dressed with Barnack stone, while the tower is of ashlar construction.

The interior features a wealth of 15th-century work, including wooden chapel screens and a very nice timber nave roof. There are 15th-century arcades and wooden pews, as well as a sedilia and piscina in the sanctuary. The most interesting historical feature is the font, which is either late 12th or early 13th century. This consists of an octagonal bowl with simple carvings of interlaced arcading, set upon a more modern marble base.

All Saints features some fascinating monuments, including those of a Scottish king and prince. Though the connection of Scotland to Cambridgeshire might seem tenuous in modern terms, in the medieval period the connection was very strong; in fact, the name of the village translates loosely as 'king's manor'.

The estate at Conington was owned by Maud, daughter of Countess Judith, who was herself the niece of William the Conqueror. When Maud married David, son of King Malcolm III of Scotland, in 1109, the estate passed to her husband. Conington remained in the possession of the Scottish crown until 1237. The estate passed through the female line for generations until it came to the Cotton family in 1477. A later Cotton may have built the tower pinnacles in 1638.

But back to the monuments; there is a rather nice memorial to Prince Henry of Scotland, who was also Lord of Conington, as well as a monument to David, King of Scotland and Earl of Huntingdon. In the north aisle is a very nice memorial to Elizabeth Cotton (d. 1702). The bust of Lady Elizabeth was very probably carved by Grinling Gibbons.

In the south aisle are further Cotton memorials, including that of Thomas Cotton, who died in 1547. Further Cotton monuments are scattered throughout the church. The earliest monument is the Purbeck marble memorial to Bernard de Brus, lord of the manor, who died in 1332. De Brus is shown in a beautifully carved monk's habit over a coat of mail.

In the churchyard is a memorial of more modern interest, to the crew of the 457 Bomb Group of the US Air Force, who were stationed nearby during WWII.

NB. There are two villages named Conington in Cambridgeshire. One is located near St Ives and has a 14th-century church dedicated to St Mary. This is the 'other' Conington, located south of Peterborough in an area that was once part of Huntingdonshire. The Woolpack Inn in Conington was said to have been a favourite haunt of the infamous highwayman Dick Turpin.

More self catering near Conington, All Saints Church >>

More bed and breakfasts near Conington, All Saints Church >>