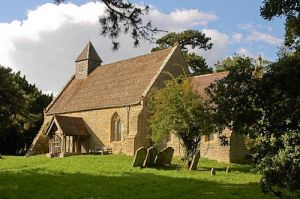 Churchill, St Michael's Church
A 14th-century church in a small Worcestershire village, St Michael's origins may reach back to the early medieval period. Fragments of a 12th-century building can be seen in the walls of the current structure. The church is externally very simple, with only a nave and chancel, and a small bellcote at the west end.

There is a mix of interesting historic features, including an octagonal 15th-century font, and a chancel screen and lectern brought here from Great Malvern Priory. The bellcote contains a pair of bells, one of which dates back to the 15th century.

There is some very nice Jacobean carving in the interior, and what appears to be partial carvings of a lion built into the sill of the north window.

There is a single window in each wall of the nave. To the east of each nave window is a small hole in the wall, about three feet off the ground. The function of these holes is not known, but they do provide a bit of a historical mystery.

There are several memorials, but none terribly old - the oldest being to Thomas Barker, who died in 1688.

St Michael's is not in regular use and is cared for by the Churches Conservation Trust.