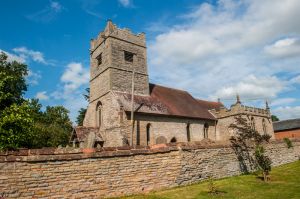 All Saints church stands in the grounds of Spetchley Park, beside the 30 acres of gardens that draw visitors from around the UK. The church was built around 1330, with the addition of a 17th-century west tower. It is built of blue lias stone in Decorated style.

Entering the church is a bit unusual; rather than a south (or north) entrance porch, a small west porch leads to the west door, and you enter through the tower into the west end of the nave.

The area of Spetchley was settled by at least the 9th century, and in the late 10th century the Bishop of Worcester gave lands to the cathedral and monastery of Worcester. The name Spetchley comes from a forest glade where local gatherings, or moots, were held, so it was obviously a place of local importance.

We do not know exactly when the church was built, but the first record of a rector comes from 1230. The nave and chancel are early 14th century, while the two-stage tower was built within the west end of the nave in the late 16th century.

As you enter through the west doorway look for deep grooves in the stonework showing where generations of soldiers sharpened their tools before training in the churchyard. At the west end of the nave is an ancient dugout chest, probably 13th century.

The communion table is 17th century as is the oak reredos and panelling in the chancel. The pulpit, painted a rather startling blue, is a Victorian addition. There are 15th-century quarry tiles set into the chancel floor. 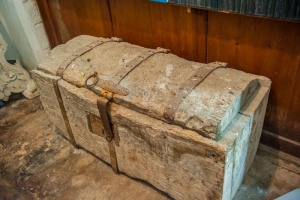 The most interesting feature of All Saints is the early 17th century embattled chapel to members of the Berkeley family. The chapel was built in 1614 and is crammed with interesting monuments.

The earliest is that of Sir Rowland Berkeley (d. 1611) and his wife Katherine (d. 1656). This grandiose memorial has effigies of the deceased couple lying beneath an ornate canopy.

Against the south chapel wall is the table tomb of Sir Robert Berkeley, Rowland's son, who died in 1656. It was he who added the family chapel to All Saints and built the ornate tomb to his mother and father in 1614.

When the Elizabethan house at Spetchley burned down in the Battle of Worcester in 1651 Sir Robert converted the stables into a house for his family. He was a staunch Royalist and Charles I gave him his personal Book of Common Prayer in gratitude for his support. Sir Robert was briefly sentenced to the Tower of London by Parliament for supporting the King's attempts to gather Ships' Money in the buildup to the Civil War.

To the east of Sir Robert's tomb is a wall memorial to his son, Thomas, who fought at the Battle of Worcester. When the Royalists were defeated Thomas escaped overseas and lived in exile in the Low Countries. There he married a Catholic woman and converted to Catholicism.

Sir Robert was outraged and disinherited his son, though he did allow him to live at Spetchley until his younger brother came of age and took up the inheritance. Thomas moved to Ravenhill, which he turned into a haven for Catholic priests.

Robert Berkeley the Younger was known for his charitable works; he lived a simple life and gave much of his money to charity. He is best remembered locally for founding Berkeley Almshouses in Worcester. His monument is thought to be the work of sculptor Grinling Gibbons.

To the north of the chancel is the recessed altar tomb of John Slade and on the floor nearby is a Jacobean memorial brass to William Smythe (d. 1658). At the west end of the nave is the font, which probably dates to the 12th century.

All Saints church is no longer used for regular worship and is in the care of the Churches Conservation Trust. 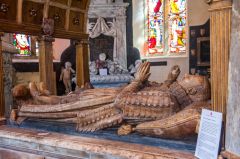 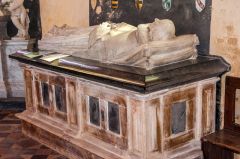 More self catering near Spetchley, All Saints Church >>

More bed and breakfasts near Spetchley, All Saints Church >>