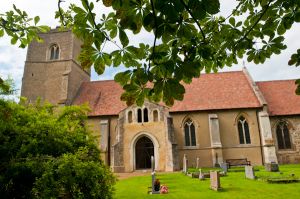 St Peter's church at Barton probably dates to the 11th century, though much of the current building is a product of a 14th-century rebuilding. We don't know the exact date of the foundation, but a document of 1270 indicates that an anchorite named Alice was living in a cell beside the church.

The south wall incorporates pieces of 11th and 12th-century construction from the original church. The exterior is very simple, composed of only an aisless nave, chancel, small south porch, and west tower. But it is not for the exterior that you should visit Barton's church, but the wonderful 14th-century wall paintings that decorate the nave.

The best of these is a rare depiction of St Antony and the Pig. The saint is shown holding a book in one hand and a staff in the other, and is standing upon a pig.

St Antony had a reputation for healing animals as well as people. The holy order founded by animals let their pigs run wild, and over time the pig became the symbol of the saint. Antony was a very popular saint, and members of his order were extremely well-liked for their care of sufferers from 'St Antony's Fire' (a fungal disease contracted by eating mouldy grain). 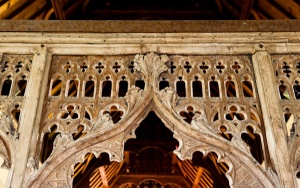 Despite this popularity, images of St Antony are extremely rare in England, and this must be the finest to survive.

Another rare image is that of St Dunstan. Though once again Dunstan was a very popular saint, likenesses of him are rare. Dunstan is shown wielding a pair of tongs by which he has managed to seize the devil by the nose. This is the only known painting of St Dunstan in an English church.

Other paintings depict the Virgin Mary, St Michael weighing souls, St Martin of Tours, the Marriage at Cana, St Christopher, and other Biblical themes. These are common themes in medieval paintings, but less common is a small likeness of St Thomas of Cantelupe, whose tomb can be found at Hereford Cathedral. Cantelupe was probably born in Barton and rose to become Bishop of Hereford as well as High Chancellor of England.

There is a wonderfully carved late 14th-century screen, decorated with, among other things, a number of heraldic shields. Among these shields are some bearing the arms of Thomas Arundel, Bishop of Ely from 1374 to 1388, which gives us good evidence for the date of the screen. Nearby in the chancel (hidden under a carpet) is a brass to John Martin (d. 1593) and his wife Margaret.

There is a simple 14th-century font built of limestone and clunch. 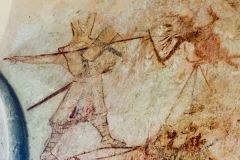 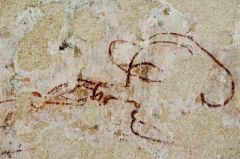 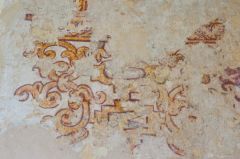 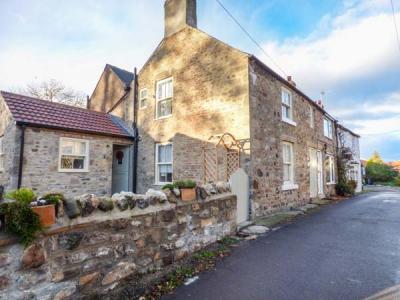