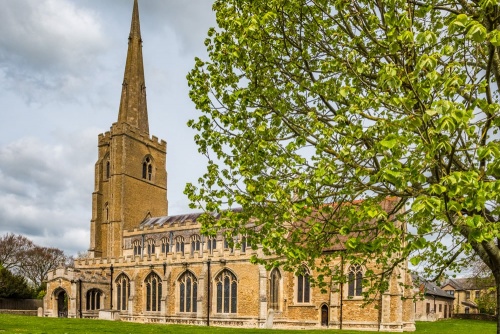 Sir John Betjeman once famously quipped that the angel roof of St Wendreda's church in March was "worth cycling forty miles into a head wind" to see. Once you see it for yourself you'll know why Betjeman was so enthusiastic.

The parish church at March is the only one in England dedicated to this little-known saint. Wendreda was a 7th-century princess, the daughter of King Anna and sister of Etheldreda and Sexburgha, both of who became abbesses and later, saints.

Wendreda became skilled at healing, using water from a holy well at Exning. She is thought to have founded a monastic community in March, dedicated to the healing arts. Her well at Exning became a place of pilgrimage and after her death, she was sanctified, and pilgrims travelled to pray at her tomb here on the edge of the fenland. 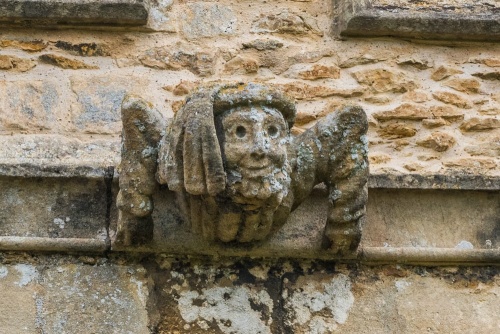 Wendreda's relics stayed in March until they were removed to Ely in the 10th century. In 1016 Edmund Ironside carried the relics into battle, hoping their reputed powers of miracle-working would help him to victory over the Danes at Ashingdon.

Unfortunately, Edmund lost, and King Canute seized the relics. Ah, but Canute was shortly thereafter converted to Christianity, so the monks of Ely claimed that the saintly influence of Wendreda had performed a miracle after all.

The relics stayed at Ely until 1343 when they were returned to March. There they stayed, drawing pilgrims from across the realm, many in search of a healing miracle for their ills. March prospered, and the church grew accordingly.

St Wendreda's is a mainly 14th-century building, likely built on the site of an earlier Norman church. It is built in a mixture of rubble, flint, and brick, with Barnack limestone dressing. The church consists of an aisled nave, chancel, south porch, and west tower with spire. 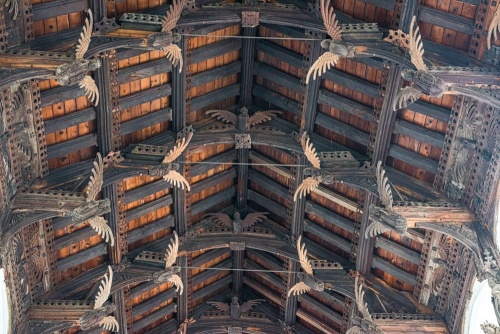 The exterior is extremely impressive, but it is the interior that people come to see. The astonishing double-hammerbeam design is ornamented with no less than 120 carved figures fixed to the king-post trusses. Though it is called an 'angel roof', there are other figures represented, including martyrs, apostles, and saints.

The carving is of the highest order, and the roof is an astonishing sight. Several dates have been put forward for the building of the roof; the traditional view is that it was built in the late 15th century, with money given by William Dredeman. An alternative puts the building between 1523 and 1526. 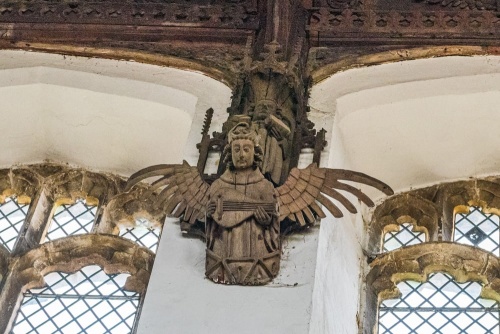 It is astonishing that the carvings survive at all. During the English Reformation, idolatrous items like the carvings were being destroyed in churches throughout the land. In 1546 Henry VIII's commissioners arrived in March, and it seemed the roof carvings were doomed.

Rather than confront the commissioners with anger, the merchants of March regaled them with food and drink and welcomed them royally. Did it help? Well, the commissioners left with loads of church silver but left the roof intact.

Around this time the relics of St Wendreda disappeared. There is no record that they were seized by the commissioners, so it is possible that they were simply hidden by the townsfolk of March. In any event, they have never been found, and their fate is unknown. 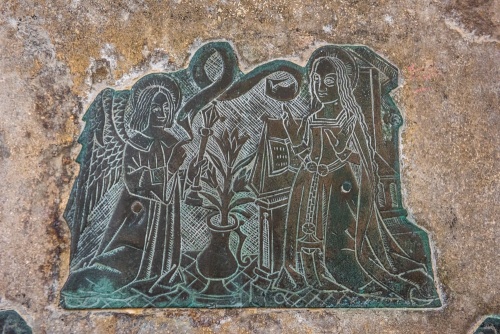 Perhaps the earliest treasure in the church is the incised Norman font. This is in a traditional tub shape and is carved with traditional Norman patterns, though these appear to have been recut in the 14th century.

There are other interesting features, including a pair of memorial brasses. One of these is to the aforementioned William Dredeman (d. 1503) and his wife, the other is to Catherine Hansart (Southwell), who died in 1517.

St Wendreda's Church is well south of the town centre on Wimblington Road (the B1101). There is adequate on-street parking on a wide side street to the west side of the roadway. The church was open when we visited on a sunny day in early spring. 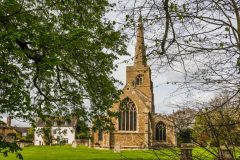 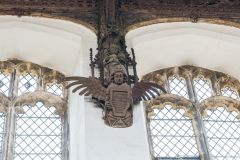 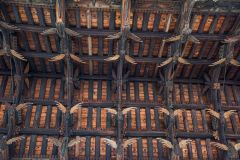 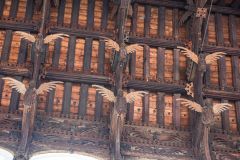 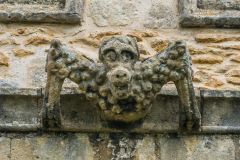