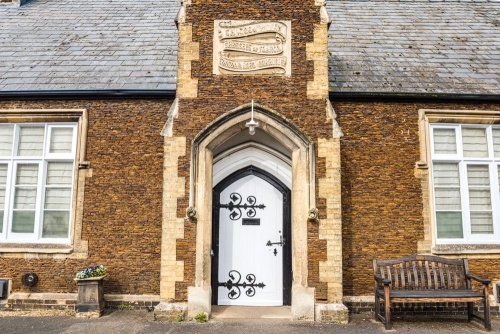 March Museum
The March Museum is a Fenland museum of local history housed in a former school building on March's High Street. See a recreated Victorian kitchen, parlour and nursery. There are locally excavated Roman artefacts, and military displays including a 1798 Doddington and Hamlets Cavalry Guidon, housed in a light-proof case.

The museum is housed in a building erected in 1851 as a girl's grammar school by the March Consolidated Charities. It is built of Carr stone, probably to a design by the popular Victorian architect Morton Peto, who worked on the March railway around that time.

The building ceased to be used as a school in 1975 and in the following year it was purchased by the town council for the museum. It opened in 1977 as a local folk museum, focussing on the Victorian period and the 20th century.

There are extensive displays about the railway, the local Morris dancing group, local crafts, and military curios dating from the Boer War, WWI and II, plus maps, weapons, and medals. A special exhibit covers the drainage of the Fens, with tools used over the centuries to help drain water.

One excellent exhibit recreates a Fenland cottage, with a cooking range, laundry mangle, and an outdoor privy. Opposite the main museum building is a display of agricultural equipment, a drainage pump, and a forge building rescued from a blacksmith's workshop at Chain Bridge.

March Museum is on the High Street, a short stroll from the town hall and market square. There is no dedicated museum parking but there is plenty of parking in the market.

More self catering near March Museum >>

The Dog in a Doublet - 9 miles
Peterborough, Cambridgeshire
Stay from: £65.00