Ramsey Abbey Gatehouse is a 15th-century gatehouse that once gave access to the powerful and prestigious Ramsey Abbey. The abbey is long gone, the victim of Henry VIII's Dissolution of the Monasteries, but the gatehouse remains.

There was a monastery at Ramsey as early as the 7th century, but Ramsey Abbey was founded in AD 969 by the Saxon nobleman Aethelwine (sometimes known as Alwine) and Bishop Oswald of Worcester. At that time Ramsey was little more than an island in the fens, and the monks had to build a causeway to connect the abbey to the mainland.

The abbey church was dedicated in AD 976. The central tower collapsed just a few years later and had to be rebuilt on firmer foundations.

Ramsey Abbey grew in prestige, aided by money from pilgrims coming to pray at the shrines of popular saints. One of those saints was St Ivo, whose remains were discovered at Slepe, later named in Ivo's honour as St Ives.

The Saxon abbey was known as a centre for scholarship. Perhaps the most famous scholar at Ramsey was Byrhtferth, who wrote detailed biographies of St Oswald, St Neot, and King Alfred the Great, and compiled a History of England. Around AD 990 he published his 'Scientific Compendium', covering mathematics, astronomy, medicine, and the scientific properties of matter. 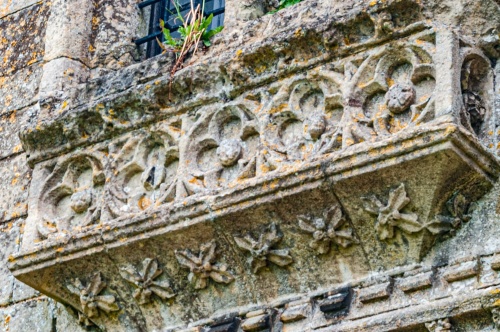 In 1226 the monks of Ramsey stole the relics of St Felix from the monastery at Ely. Pursued by the angry monks of Ely, they made their escape when a 'divine fog' descended and obscured their trail.

The presence of St Felix's relics at Ramsey boosted the abbey coffers, and by 1086 the abbey was the largest landowner in Huntingdonshire and the fourth largest ecclesiastical landowner in all of England.

In 1110 King Henry I granted Ramsey abbey the right to hold an annual Easter fair -- not in Ramsey itself, but in St Ives. The success of the fair made it a focal point for the cloth trade and drew visitors from across England and abroad.

The wealth generated by the fair and by pilgrims enabled the monks to build a new church, which was finished in 1123. The church and abbey were soon embroiled in the tumult of The Anarchy, the struggle for the throne between King Stephen and Queen Maud. 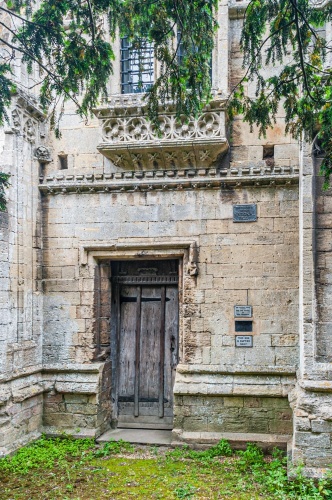 The south door and oriel window

In 1143 Geoffrey de Mandeville, Earl of Essex, rebelled against King Stephen and occupied the abbey, using it as his base of operations. An account of the time says that so violent was the episode that 'blood bubbled out of the walls of the church.'

Earl Geoffrey was killed in an attack on Burwell Priory in 1144 and Ramsey Abbey was once more left to the abbot and monks.

In 1237 the abbey's guesthouse was transformed to become the parish church for Ramsey. The nave and chancel survive from the monastic building, but the tower and aisles are later additions.

In 1290 Edward III expelled all Jews from England. Gregory Huntingdon, a monk from Ramsey, collected Hebrew texts from synagogues at Stamford (Lincolnshire) and Huntingdon. These texts and others acquired later made Ramsey Abbey a focal point for Hebrew studies. A later monk from Ramsey named Laurence Holbeach published a Hebrew dictionary.

Like so many monasteries, Ramsey Abbey suffered during the Black Death of 1348-50 and found itself in heavy debt after the threat of the plague receded. The abbey still had the resources to build the impressive gatehouse, which dates from 1475. 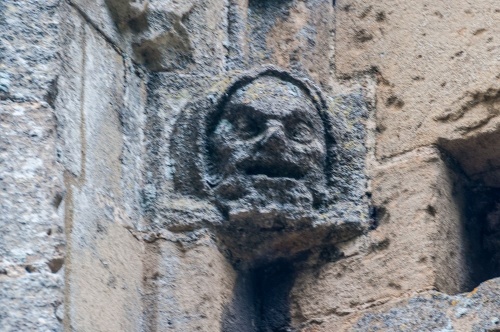 Ramsey Abbey was dissolved by Henry VIII in 1539 and the last abbot received a sizeable pension. Richard Cromwell bought the abbey estate and immediately began pulling down the monastic buildings and selling off the stone to Cambridge colleges. For example, stonework from Ramsey Abbey can be seen incorporated into Trinity College.

The Cromwell's manor house passed through several families over the following centuries and was extended several times. The Fellowes family owned the manor from 1737 until 1931 when it was leased to the Abbey Grammar School (now Abbey College). The former abbey gatehouse was given to the National Trust in 1952 in memory of Diana Broughton, sister of the 3rd Lord de Ramsey.

Though most of the abbey buildings were destroyed during the Dissolution of the Monasteries, the Lady Chapel survived to form part of Abbey College. The ruined 15th-century abbey gatehouse acts as an entrance to the Abbey College grounds. In the 16th century, part of the gatehouse was pulled down and reassembled to form part of another Cromwell family home, Hinchinbrooke House, in Huntingdon.

The gatehouse contains superb carvings and an ornate oriel window. It stands two storeys high, with an octagonal turret to the north. Over the central arch rises a gabled bell turret designed by Sir John Soane.

Inside the gatehouse, the highlight is a late-13th-century alabaster effigy of Alwine, the abbey founder. Unfortunately, the interior is only rarely open to visitors. Check the National Trust website for upcoming opening times.

By contrast, the exterior can be viewed at any time. 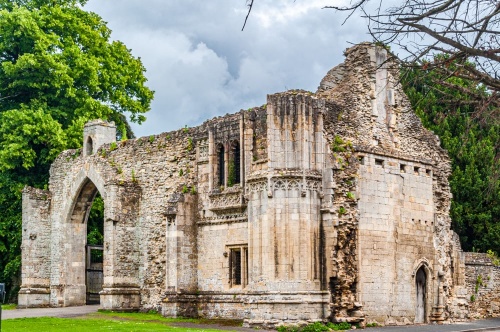 The gatehouse from the north-west

The thing that struck me most about Ramsey Abbey Gatehouse was the oriel window around the back (to the right of the gatehouse arch). The carving, though worn with age, is wonderful, in a style that suggests the abbot was keen to show off the wealth and prestige of the abbey.

It won't take long to view the gatehouse unless you are fortunate enough to come on one of the limited opening days and can view it inside.

Ramsey Abbey Gatehouse is on Wood Lane (High Street) in the heart of Ramsey. The gatehouse is set back from the road by a wide green that links it to the neighbouring parish church. There are car parking spaces along Wood Lane, directly in front of the gatehouse.

More self catering near Ramsey

More bed and breakfasts near Ramsey