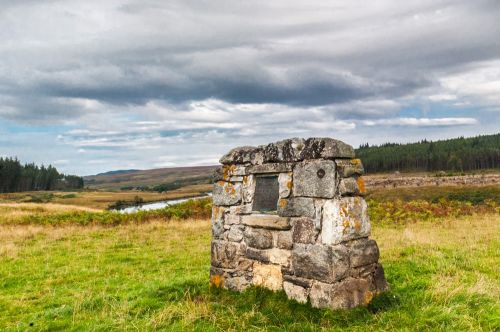 The Highland Clearances brought devastation to vast areas of Sutherland. The upheaval caused by forcing out crofting families in favour of large sheep farms was chronicled by Donald Macleod, a stonemason from Rosal, in Strathnaver. His recollections of the Clearances that devastated his Highland home was published under the title Gloomy Memories.

Today, a memorial cairn to Macleod stands in Strathnaver, opposite the deserted township site where he and his family once lived. The Clearances Memorial (aka Gloomy Memories Memorial or the Macleod Memorial) is a simple cairn on the west bank of the River Naver, south of Syre.

Donald Macleod was born in Rasal in the late 18th century to William Macleod, a farmer and stonemason. He apprenticed as a stonemason under his father. He was roughly 20 years old when the village of Rasal was cleared on the orders of the Countess of Sutherland's factor, the infamous Patrick Sellar, an event he later portrayed vividly in his writings.

Sellar cleared Rasal in 1814-16, burning the resident's huts to ensure their compliance. Sellar himself moved in as the new tenant farmer after the village had been cleared.

From Rasal, the Macleod family was forced to move to Strathy Point, a desolate location north of Totegan. Sellar's replacement as factor forced the Macleods to move once again. After fruitless attempts to survive in Sutherland, Donald Macleod moved south to Edinburgh. 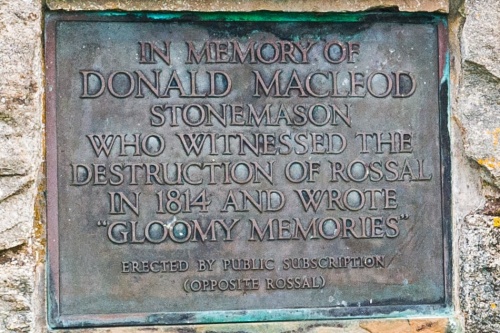 Macleod wanted to publish his first-hand accounts of the Clearances, but public opinion was not ready to hear his negative views. It was not until opinion began to change that he was able to get the Edinburgh weekly Chronicle to publish a series of 21 letters based on his experiences in Strathnaver. He later extended those letters to create his book History of the Destitution of Sutherlandshire.

Macleod was persecuted for his writings by agents of the Countess and her husband, the Marquis of Stafford. His wife suffered badly, and was, it is claimed, reduced to madness by their persecution of her husband.

He spent the rest of his life telling and retelling the story of the Clearances, in particular 'The Year of the Burnings (Bliadhna an Losgaidh), the efforts of Patrick Sellar to clear the glens of Sutherland on behalf of the Countess and for his own gains. 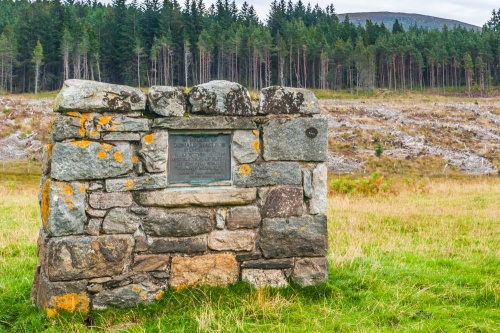 Looking towards the site of Rasal village

Some historians have argued that Macleod's accounts are biased and inaccurate. If so, it isn't surprising, for Macleod and his family suffered enormously at the hands of the Sutherland factors and their men.

On one occasion in October 1830, while Macleod was away working in Wick, eight men, employed by the Sutherland Estates, forced his family out of their house in Bettyhill, threw their furniture out after them, and boarded up the doors and windows. It was a cold, wet night, but the men warned the Macleods' neighbours that anyone who gave shelter to the family would also be evicted. Is it any wonder, then, if Macleod's accounts of the 'improvements' in Sutherland were one sided?

Donald Macleod eventually emigrated to Canada, where he settled in Woodstock, Ontario and lived out his days. It was while resident in Canada that he published his most memorable work, Gloomy Memories, in 1856.

The book was a response to Harriet Beecher Stowe, the author of the anti-slavery novel Uncle Tom's Cabin, who, on visiting Sutherland, wrote Sunny Memories -- In (England) A Foreign Land, a book full of praise for the 'improvements' made on the Sutherland estates. Gloomy Memories was Macleod's attempt to set the record straight.

Gloomy Memories has been republished by the Strathnaver Museum in Bettyhill. This beautifully-written book is in English, which is impressive in itself, for Macleod would have spoken Gaelic when he lived at Rasal.

The simple stone cairn has a plaque that reads as follows:

Erected by Public Subscription
(Opposite Rossal) 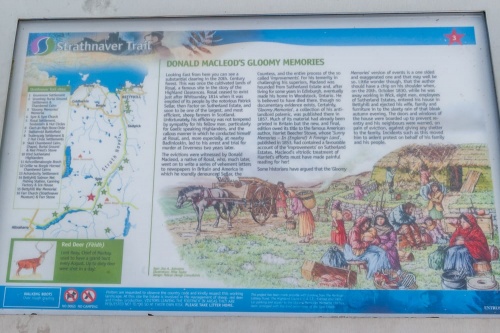 Visitors are welcome to explore the Clearance village of Rasal. To reach the village situated on the east bank of the River Naver, take the B871 at Syre and cross over to the east bank. Immediately turn right on the track leading south along the river for 2.4km to a parking area at the edge of a forest plantation (grid reference NC 690 426). From the car park, a signposted trail leads to the Rasal site roughly 500m to the south.

Excavations at Rasal have revealed 60 acres of farmland encircled by a drystone dyke. The remains of over 70 buildings have been found, including longhouses, outhouses, barns, stackyards, and corn-drying kilns.

While the Macleod Memorial is not impressive in itself, it is important as a reminder of the devastation caused by the Highland Clearances in Strathnaver and throughout Sutherland, and it preserves the memory of the man who, perhaps more than any other, helped bring the story of the Clearances to light.

Nearby accommodation is calculated 'as the crow flies' from Gloomy Memories Memorial. 'Nearest' may involve a long drive up and down glens or, if you are near the coast, may include a ferry ride! Please check the property map to make sure the location is right for you.