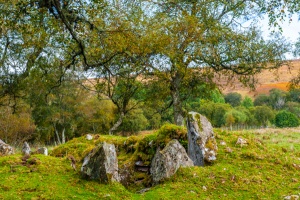 In a clearing in a wooded field near the River Naver stands the remains of a Neolithic chambered cairn. The cairn is composed of two chambers divided by large upright stones. The top of the cairn has been lost, so you can easily see the arrangement of the chambers and the central passage that leads to it.

The cairn is surrounded by a low earthwork, which formed the original kerb to the burial mound. There has never been a proper archaeological excavation at Skail, so we aren't sure how many people might have been buried here, whether they were buried with grave goods, or exactly when the cairn was used.

Skail cairn is interesting as much for the tales that surround the site as for its historic value. According to local legend, an 8th-century Christian holy man called Maol Ruadh, or The Red Priest, made his dwelling here. According to the story, the Red Priest was killed at the entrance to the cairn by a band of Viking raiders.

His body was carried to a burial ground 1/2 mile away to the north, and the site of his grave marked by a stone carved with the sign of a cross. You can still see The Red Priest's Stone, inscribed with the shape of a cross, in the old burial ground.

Is the story plausible? Certainly, the area was raided by Vikings during the 8th century, and Columban missionaries were active at the same time. So, yes, the story could be based in fact.

Would a Christian missionary have made his dwelling inside a chambered cairn? That seems unlikely, but it is certainly possible that a Christian priest would have used a site like Skail that already had spiritual meaning to the local inhabitants. 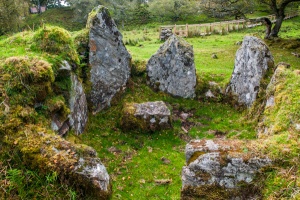 Inside the main burial chamber

Maol Ruadh has been linked to St Maelrubha, who died in AD 722. Where they one and the same person?

There is no parking at the site. You have to park in a signposted layby opposite the trail to the Red Priest's Stone, about 1/2 mile north along the B871. From there, simply walk along the road, past several houses, to a wooded area where you can clearly see a stile giving access to a boardwalk which leads over marshy ground to the chambered cairn.

There is an information panel at the end of the boardwalk You can access the cairn easily, and walk into the burial chambers. This is a very atmospheric site; one of the most picturesque cairns I've visited, with the trees adding a sense of age and mystery to the site.

The Skail Chambered Cairn and the nearby Red Priest's Stone are both part of the Strathnaver Trail, linking historic sites up and down the glen. Look for the Trail signposts throughout Strathnaver and pick up a brochure with a map of the sites for many locations in the area. 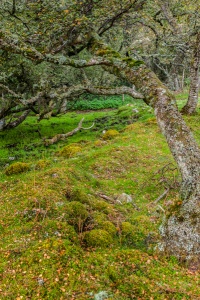 Remnants of the kerb,
or retaining wall 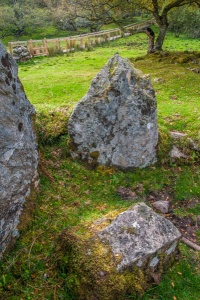 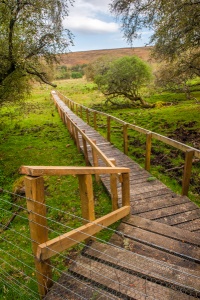 The boardwalk leading
to the cairn

About Skail Chambered Cairn
Address: Skail, Sutherland, Scotland
Attraction Type: Prehistoric Site
Location: On the B871 at Skail. Parking in a signed layby 1/4 mile north, then walk along the road to a stile and boardwalk to the cairn.
Website: Skail Chambered Cairn
Location map
OS: NC712469
Photo Credit: David Ross and Britain Express

Nearby accommodation is calculated 'as the crow flies' from Skail Chambered Cairn. 'Nearest' may involve a long drive up and down glens or, if you are near the coast, may include a ferry ride! Please check the property map to make sure the location is right for you.