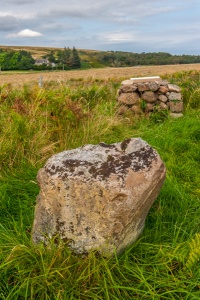 The Red Priest's Stone
Skail is a small hamlet halfway down the Strathnaver glen. This area of Strathnaver is replete with tales of Maol Ruadh, 'the Red Priest', an early Christian missionary traditionally associated with St Maelrubha. Maelrubha died in AD 722, and is generally thought to have lived and preached in the area around Applecross in Wester Ross, but Strathnaver claims him, too!

Whoever the Red Priest was, he was said to have established a stone chapel at Skail before he was slain by Viking raiders at the nearby Neolithic cairn. According to tradition, his body was carried to the burial ground beside the river, and the site of his grave was marked with a small stone, carved with the shape of a cross.

If you follow the waymarked trail along the edge of a farm field at Skail, you come at length to an overgrown area of ground, thought to be the site of the burial ground. The only visible remnant of the burial site is a single squat stone, leaning at an angle, with the shape of a cross clearly visible on its northern face. There is no other decoration visible on the cross; both the rear face and the sides are unfinished. This is the Clach an t-Sagairt Ruidhe, or Red Priest's Stone.

A local legend says that if the river destroys the Red Priest's grave, the glen will be repopulated. To prevent this prophecy from coming true, workers on the Sutherland estate used stone from the chapel to strengthen the riverbank. 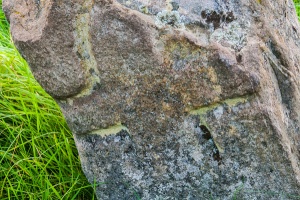 Another legend says that the church of St Columba at Bettyhill, 12 miles to the north, was built with stones from a ruined chapel at Skail, though the stones had to be carried in wicker baskets all the way up the glen.

If the tale is true, it suggests that the chapel of the Red Priest at Skail was a place of great veneration, for why else would the people of Skail go to such great effort to carry stones from the chapel all the way to Bettyhill?

One interesting footnote to this legend is that the font from the original chapel was not carried to Bettyhill, and could still be seen b the side of the road into the 19th century.

What is the truth behind all these stories? Does the Red Priest's Stone mark the grave of St Maelrubha? We don't know; all we can be certain of is that the stone appears to be of very great age, and is set within an ancient burial ground. The rest is guesswork, bolstered by local tradition which suggests that Skail was an important place, a place worthy of veneration.

The Red Priest's Stone is part of the Strathnaver Trail, linking historic sites along the glen. There is a layby along the B871, with 2 information panels, one at the start of the trail to the stone and one beside the stone itself.

Brochures covering the Strathnaver Trail are available throughout the area, and at the Strathnaver Museum just outside Bettyhill. I highly recommend picking up a brochure; it really helps give an excellent historic overview of this wonderfully scenic and historic area. 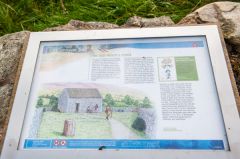 Nearby accommodation is calculated 'as the crow flies' from Red Priest's Stone. 'Nearest' may involve a long drive up and down glens or, if you are near the coast, may include a ferry ride! Please check the property map to make sure the location is right for you.