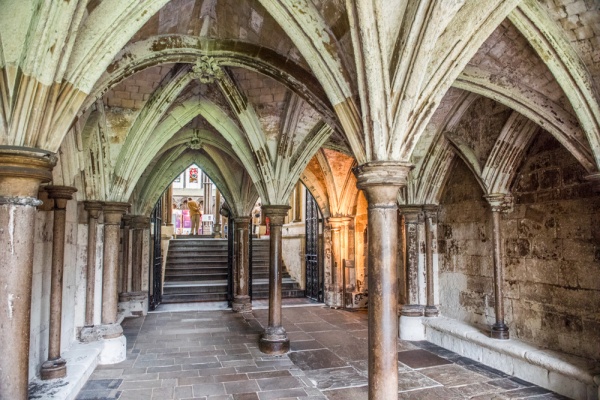 The chapter house of Westminster Abbey was built in 1250 to serve as a gathering place for the Benedictine monks who oversaw the running of the abbey and its church. The monks would meet here daily to go over all the myriad of administrative details necessary to run such a large and important monastic establishment. 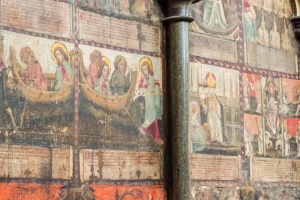 The Chapter House was later used as a meeting place for the King's Great Council and the Commons, forerunners of the modern Parliament.

The Chapter House is a lovely example of Gothic style, with a high, vaulted ceiling supported on a slender central pillar. The chamber is ornamented with wonderful medieval sculpture and extremely well-preserved wall paintings.

The wall paintings are among the best-preserved and most historically important in England. They date to the late 14th century and depict the Apocalypse and the Last Judgement. The paintings were the gift of John of Northampton, a monk serving at Westminster from 1375-1404.

Below the frieze of Biblical scenes are paintings of birds and animals that were added a century later. The scenes are evenly divided under the arches that ring the Chapter House; each arch holds four scenes framed by red bands of roses or small dogs. Beneath each scene are scrolls of text.

The floor is largely original, built of brightly coloured glazed tiles. Outside the Chapter House are the abbey cloisters, a lovely open space where the monks of Westminster would take their exercise. 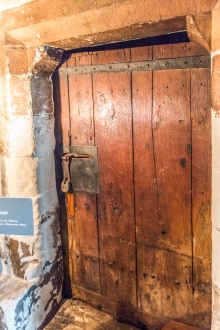 On the right-hand side of the passage as you enter the Chapter House is a late Saxon door thought to be the oldest door in England. Scientific dating techniques have revealed that the door was built around AD 1050 and was cut from oak trees growing in the forest that then fringed London.

The iron hinges hide traces of cowhide, so it seems the doorway was covered with painted hide on both sides. The hide was originally thought to be human skin from two monks flayed for their role in the 1303 Pyx Chamber robbery (see below), put on the door as a warning. Thankfully, the real purpose of the hide seems to have been simply to decorate an important doorway.

The door was originally much higher, perhaps as much as nine feet high, but was later cut down.

But why is the door still here? When Henry III rebuilt Westminster Abbey he swept away all traces of the original Saxon building. There must have been something very special about the door that caused Henry to spare it. One theory is that the door once enclosed the chamber where Edward the Confessor's body lay.

A much earlier chamber than the Chapter House is the Pyx Chamber, which dates to the 11th century. This chamber was used as a treasury for both the monastery and for the British crown. Though many of the fittings were removed during the Reformation, a 13th-century stone altar remains, as do the medieval tiles on the floor. 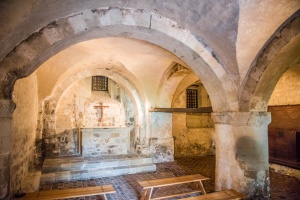 Beside the entrance is a 15th-century cope chest, made about 1450 and one of just a half dozen remaining in Britain. The cope chest is a peculiar wedge shape, made to hold circular capes or cloaks worn by the clergy.

In the late 13th century the Pyx Chamber was used by Edward I as a royal treasury, holding jewellery, precious objects, swords of state, and silver cups and plates. The Pyx Chamber was considered to be the most secure storage place possible; the medieval equivalent of a high-security vault.

In 1303 the Chamber was robbed, and suspicion fell on the monks of Westminster Abbey. The Abbot and 48 monks were taken to the Tower of London and questioned at length. Edward was probably reluctant to impose a humiliating criminal sanction on the Abbey, and he eventually released the monks.

The culprit was eventually found to be Richard Pudlicote, a gentleman of Oxfordshire. Pudlicote was found with some of the stolen goods in his possession, and other pieces were discovered in pawnshops around the capital. He was sentenced to death, and transported from the Tower of London in a wheelbarrow to Tothill Lane, where he was hanged.

An apocryphal story was circulated that Pudlicote's skin was flayed from his body and fixed to the treasury door as a warning to potential thieves. What is fascinating about the robbery is that it almost certainly was an 'inside job'; the monks had to have had some knowledge of Pudlicote's activities, yet the king was reluctant to act against them directly. 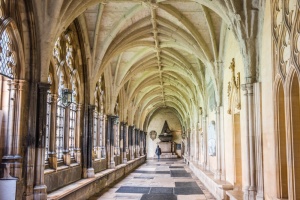 Also part of the Pyx Chamber and Chapter House visiting experience are the cloisters, where monks would exercise or simply walk in meditation. You can get excellent views of Sir Christopher Wren's famous west towers from the cloister walk.

The walls of the cloister are filled with historic memorials, including many to military regiments and civil servants. The oldest is a worn effigy set into the floor, showing an early medieval abbot.

Do NOT join the long line of visitors waiting to go in the main abbey entrance facing Parliament Square. Instead, walk around the abbey's west end to the arched entrance into Dean's Yard. This peaceful quadrangle is lined with historic administrative buildings and residences and seems a world away from the bustle beyond the Yard. Head for the archway in the corner of the Yard that gives entrance to a cafe and to the cloisters.

There is usually tight security on all abbey entrances, so be prepared to have any bags searched (though on our last visit the search was quite perfunctory).

Note:
We've given the Chapter House and Pyx Chamber a separate attraction entry as they can be accessed separately from Westminster Abbey. Unlike the abbey, they are administered by English Heritage, and a separate entry fee is payable for non-English Heritage members.

Also note that the Chapter House may be closed at short notice for State and Religious occasions. 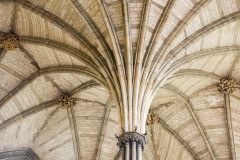 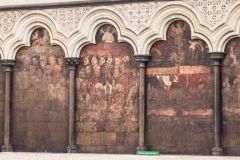 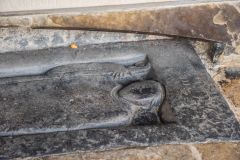 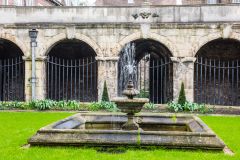 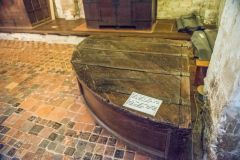 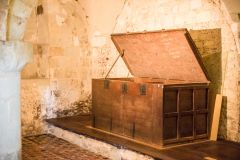 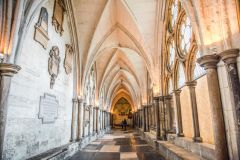