HERITAGE HIGHLIGHTS:   One of very few medieval churches in the Western Isles 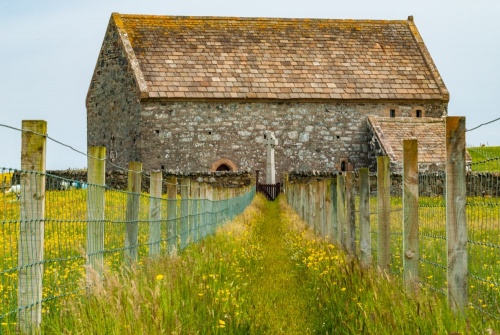 The medieval church of St Moluag stands in a field outside the village of Eoropaidh (Europie), at the northern tip of the Isle of Lewis. The building we see today may date to the 12th century, but it stands on a site where there has been a church since the 6th century.

The dedication to St Moluag is uncertain. Over the years, the church has variously been recorded as St Maelrubha's Church, St Mulvay's Church, St Olaf's Church, St Mallonvy's Church, and variations on each of those spellings. In Gaelic, it has been known as Teampull Mor, Teampull Eorrapaidh, and Teampull Mholuaidh. It is marked on Ordnance Survey maps as St Molveg's Church. 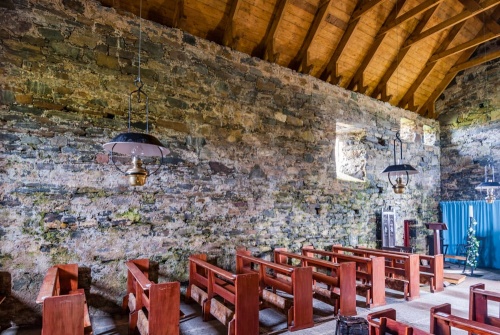 Well, the answer to that question isn't as easy as you might think. Putlock holes in the church walls suggest a date in the 12th century. These holes were used to support timbers used in construction.

Other architectural details, however, including window style and a plinth buttress suggest a later date, perhaps sometime in the 16th century. It is, of course, possible that the church was begun in the 12th century and repaired and adapted in the 16th century.

In either case, it is quite possible that the site was already in use, possibly as early as the 6th century, and that the building we see today was founded during the Norse period of rule.

The church is laid out on a T-plan, with a rectangular nave terminating in flanking chapels. The southern chapel is built as a lean-to and can only be accessed through an external doorway. 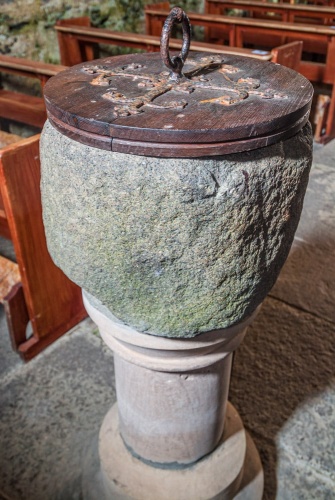 Within the church is a roughly carved font bowl on a modern stem and a wooden poor box bound with heavy iron straps. Outside the church stands a beautifully crafted war memorial in the shape of a Celtic cross.

St Moluag's Church was recorded as roofless at the turn of the 20th century. In 1910 the Scottish Episcopal Church launched a restoration campaign, and the building work was complete by 1912. There is no electricity or running water; interior lighting is by candle and oil lamp. This gives the church a wonderfully peaceful atmosphere. 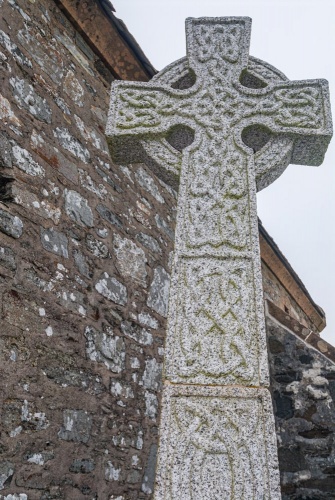 Europie Church is a focus for a remarkable number of folk tales and legends. One legend says that the church was originally on the opposite side of a small stream, but shifted to its present position one night after it became outraged that a group of local women were spinning black wool late into the night one Saturday evening.

Another story says that the church was founded by St Ronan of Locronan, a 6th-century Irish bishop. Ronan had a reputation as a healer, and his relics were thought to have healing powers. It is no surprise, then, that St Moluag's Church also gained a reputation as a place of healing. 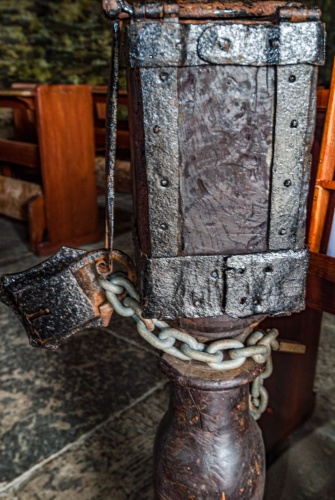 The church is particularly associated with healing mental illness. It was said that an insane person would be healed if they drank for a nearby holy well and slept with the church walls.

During the 17th century a visitor to Lewis recorded that people who were too badly injured or ill to make the trip to Eoropaidh would carve a likeness of the afflicted part of their body and send it to the church. These wooden figures would be laid on the altar.

Local residents had a tradition of meeting at St Moluag's Church for drinking and dancing twice each year, once at Candlemas and once at Halloween. Not surprisingly, a priest stopped these celebrations. 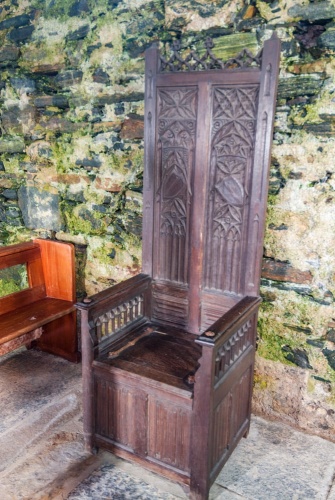 A high-backed chair inside the church 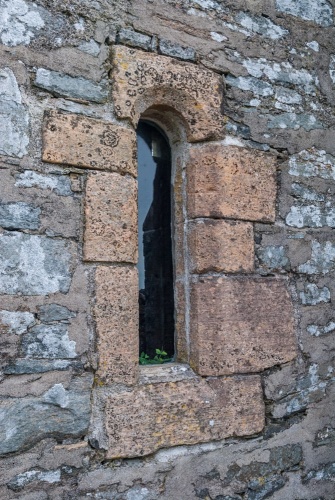 Another variation on this tale says that the church was the focus of a pagan ceremony associated with a sea goddess. According to this story, villagers came to the church, each family bringing a peck of malt.

The malt was then brewed into ale and one of the villagers would wade out into the sea, carrying a cup of the ale. He would offer up the ale to a sea goddess named Shony and ask her to send seaweed to enrich the soil for the forthcoming year. They would then return to the church for a silent ceremony followed by merrymaking outside the church walls.

The church is very easy to reach. It stands at the end of a short footpath off the B8014 at Eoropaidh. There are no obvious signs that I could see, but the church is easily visible from the road. It was open when we visited.

Nearby accommodation is calculated 'as the crow flies' from Europie, St Moluag's Church. 'Nearest' may involve a long drive up and down glens or, if you are near the coast, may include a ferry ride! Please check the property map to make sure the location is right for you.

Norse Mill, Isle of Lewis Prints
PUT THE BEST OF BRITAIN ON YOUR WALL