Bridge to Nowhere, Isle of Lewis 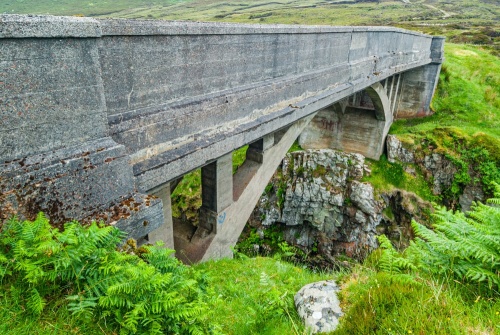 The Bridge to Nowhere, Isle of Lewis

William Lever, 1st Baron Leverhulme, was a man with a vision. Lord Leverhulme made a fortune selling soap, and in 1918 he used that fortune to purchase the island of Lewis. In the following year, he bought the South Harris estate.

Lord Leverhulme's ambitious plan was to create a fishing industry centred on the port of Stornoway, the main settlement on Lewis. He believed that his plans would improve the lives of local crofting communities, but the crofters resisted his changes to their established lifestyle. 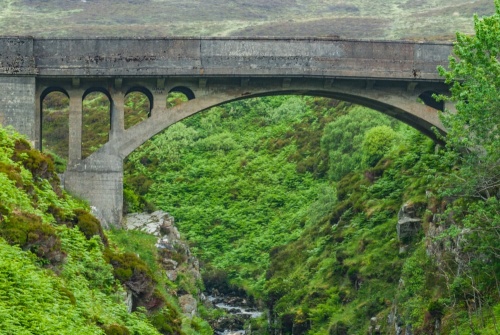 The bridge from the east

The Bridge to Nowhere

Part of Leverhulme's plans included a road link between Stornoway and Port of Ness, via the settlement of Tolsta. Outside Garry Beach, the proposed route crossed Abhainn Ghearadha (the River Garry). Here, the river descends through a deep ravine before emptying into the sea.

To span the ravine, Lord Leverhulme built a single-span bridge, of reinforced concrete stretching 100 feet across the ravine and reaching a height of 50 feet above the river. The main arch is further supported by eight small arches built into the span. There are huge concrete abutments on the southern end.

Sadly, Lord Leverhulme's plans foundered, due to a mix of political interference and local opposition from veterans who had survived the First World War and wanted to return to the crofting life they were accustomed to rather than beginning again as employees of Leverhulme's commercial enterprises. 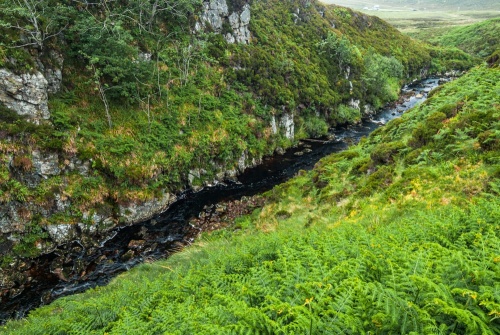 The River Garry from the bridge

Leverhulme abandoned his plans for Lewis in 1921 and focussed instead on Harris, where there was less organised opposition. He sold his estates on Lewis in 1923 and died two years later.

The road link to Port of Ness was never completed. North of the bridge, the road simply peters out, becoming little more than a track.

The bridge, then, became a symbol of Lord Leverhulme's fruitless plans. It stands, a stark concrete span in an otherwise barren landscape, accomplishing nothing and heading to no place. It became known simply as The Bridge to Nowhere (sometimes called Garry Bridge). 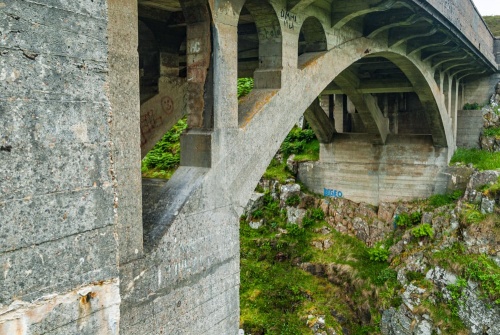 Nowadays the Bridge to Nowhere has found a purpose; it forms part of a Heritage Trail that runs up the east coast of Lewis from New Tolsta to Port of Ness. The Heritage Trail is 20km long (12.5 miles) and crosses very boggy ground, so please wear good waterproof footwear if you want to attempt the entire route!

Reaching the Bridge to Nowhere is straightforward. Take the B895 north from Stornoway. At New Tolsta the road narrows to a single-lane with passing places before reaching a parking area with picnic tables. From the end of the road simply walk north along the obvious track for about 400m until you reach the bridge. From the car park to the bridge should take no more than 5 minutes.

Nearest Accommodation to Bridge to Nowhere, Tolsta, Isle of Lewis:

Nearby accommodation is calculated 'as the crow flies' from Bridge to Nowhere. 'Nearest' may involve a long drive up and down glens or, if you are near the coast, may include a ferry ride! Please check the property map to make sure the location is right for you.

More self catering near Bridge to Nowhere, Tolsta, Isle of Lewis

More Hotels near Bridge to Nowhere, Tolsta, Isle of Lewis

More bed and breakfasts near Bridge to Nowhere, Tolsta, Isle of Lewis