HERITAGE HIGHLIGHTS:   A poignant reminder of the crofters' struggle for land rights 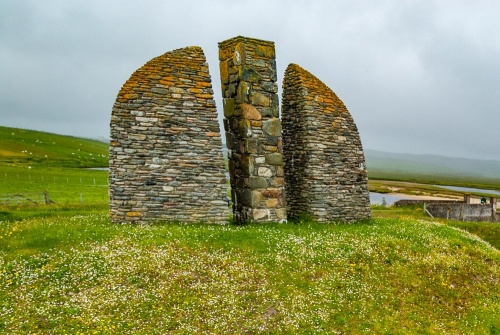 Coll and Gress (sometimes known as Grias) are two small settlements on the east coast of Lewis, north of Stornoway. In 1919 these rural communities were at the centre of a struggle for the rights of crofters against the power of landowners, a struggle that helped change Scottish history.

A memorial to the Gress Raiders stands near a bridge across the River Gress (Abhainn Ghriais), the site of a dramatic land raid. 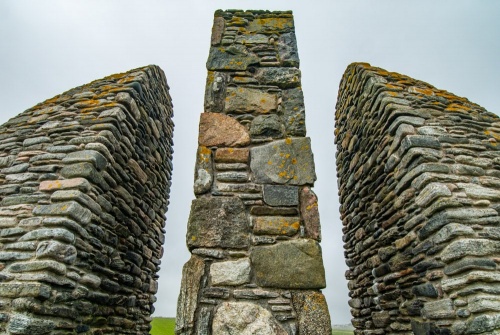 A closeup of the memorial

Soldiers from the Isle of Lewis who served in the Great War were promised crofting land and homes by the government on their return. These promises were broken, and unrest naturally followed. Lord Leverhulme, who owned the Lewis estate at that time, wanted to transform the traditional crofting heritage of Lewis and create an economy based on fishing and industry, with former crofters becoming his employees.

To give Leverhulme his due, he had a vision to modernise the economy of the Western Isles and seems to have been genuinely nonplussed that his vision wasn't embraced by the inhabitants.

Leverhulme opposed the Board of Agriculture's plans to create crofts for landless families. In response, local residents, led by landless ex-servicemen and their families, marched into farming areas and took control of the lands, seizing back crofting territory that their ancestors had been evicted from during the Highland Clearances. 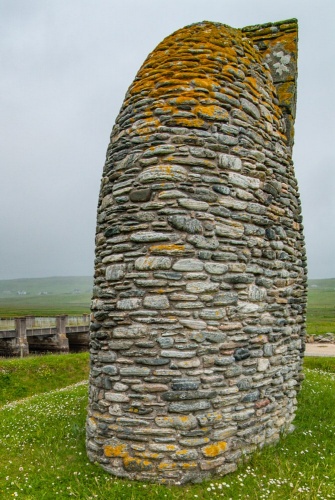 Atop the memorial mound

Some of the largest land raids took place on the Gress and Upper Coll farms in March 1919. The authorities evicted the raiders and Lord Leverhulme threatened the local inhabitants with unemployment.

The land reformers did not give up, and seized traditional crofting lands several times over the next few years.

Faced with open revolt, Lord Leverhulme backed down and gave up the Upper Coll and Gress farms. The government's hand was forced by the raiders' actions and they finally kept their agreement, making farmland available to ex-servicemen and their families. 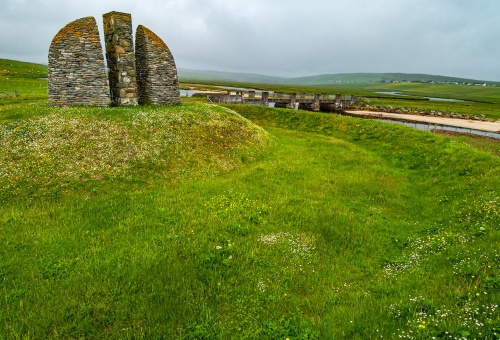 The memorial bank and trench

In 1922 the government divided the farms into more than 100 crofts, creating crofting communities that still survive. If you look at an Ordnance Survey map of the area you can see the long, slender strips of farmland created as part of this scheme.

Lord Leverhulme abandoned his plans to industrialise Lewis and sold the estate in 1923.

Three memorials across the Isle of Lewis commemorate the land raiders. The memorials stand at Aignish (NB4832), Balallan (NB2619), and here at Gress. The Gress memorial, the most northerly of the three, was designed by Will McLean and built by Jim Crawford, a local stonemason. It stands on a low hill surrounded by earthworks in the form of trenches and waves, a reminder of the First World War and the promises made to those who survived the conflict.

The Gress Raiders Memorial cairn has an information panel in Gaelic and English, with a map showing the location of all three memorials to the crofters of Lewis. 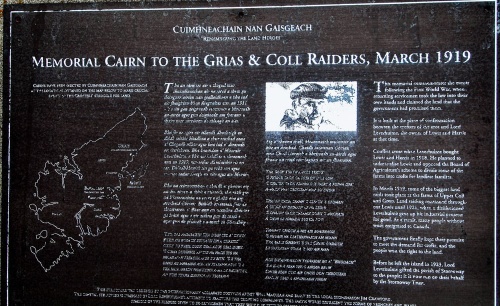 The Gress Raiders Memorial stands immediately on a slip road running parallel to the B895 at the southern end of the old bridge across the River Gress between Back and Gress, about six miles north of Stornoway. There are picnic tables and a car park on the verge.

As you head along the B895 look for the brown tourist sign labelled 'Stri an Fhearainn: The Land Struggle' and 'Cuimhneachan air Gaisgich na Sgire: Memorial to the Heroes of the District'. This takes you onto a paved minor road that runs parallel to the B895 for a few hundred yards before reaching the memorial.

Nearby accommodation is calculated 'as the crow flies' from Gress Raiders Memorial. 'Nearest' may involve a long drive up and down glens or, if you are near the coast, may include a ferry ride! Please check the property map to make sure the location is right for you.

More self catering near Gress Raiders Memorial, Isle of Lewis