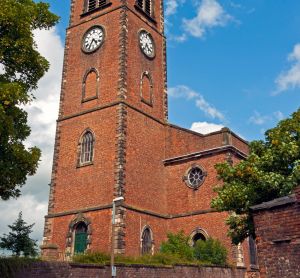 Macclesfield, Christ Church
A Georgian town church built by a wealthy industrialist. Charles Roe made his fortune in the silk trade, and he provided the money for a fine new church in the centre of the burgeoning town of Macclesfield.

Christ Church is built to a fairly traditional Georgian style, but there was one innovation that may have been prompted by Roe himself; the interior galleries are supported on cast-iron posts, representing one of the first examples of the use of cast iron in church architecture.

The interior is simple, and would originally have seemed even more simple, as the original glass was clear. The 18th-century glass has been replaced in many places by richly coloured Victorian stained glass, including a window to several members of the Roe family.

Charles Roe's marble memorial stands on the south wall, and the carvings on the memorial depict his silk mill, Liverpool copper works, and a picture of the church itself.

Religious reformer John Wesley is known to have preached from the pulpit of Christ Church on at least a dozen occasions, though the pulpit is altered from how it Wesley would have known it.

The church is no longer in regular use for worship and is cared for by the Churches Conservation Trust. It remains a very nice example of a Georgian town church. The church opening times vary throughout the year so it is a good idea to check the official Trust website before visiting.