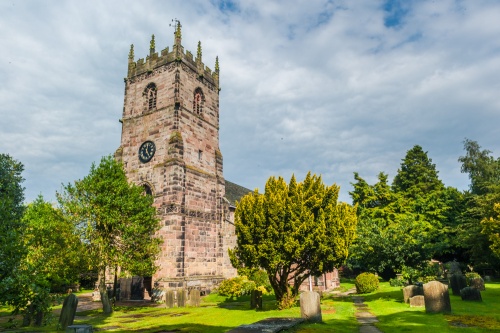 St Peter's Church, Prestbury is an attractive 13th-century building once owned by the Abbey of St Werburgh in Chester. In the churchyard is a Norman chapel with a beautifully carved 12th-century doorway, while in the churchyard stands a Saxon cross.

Prestbury was not mentioned in the Domesday Book of 1086 but a Saxon cross-shaft incorporated into the 13th-century chancel wall suggests that there was a church here before the Norman Conquest. We do know that by 1153 the manor of Prestbury was held by the powerful Earls of Chester, for in that year Earl Hugh gave the manor and church to the Abbey of St Werburgh in Chester.

The monks of St Werburgh tore down the earlier Saxon church and built a chapel, now known as The Norman Chapel. That chapel served Prestbury as a place of worship until 1220 when a new church was erected. Rather than incorporate the chapel into the new building the monks left it in the churchyard to act as an oratory and built a completely new church. 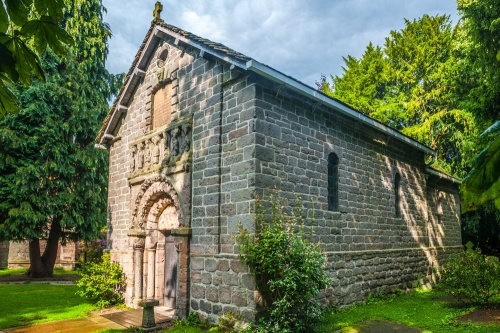 When the Abbey was suppressed by Henry VIII at the Dissolution of the Monasteries the church passed briefly to the Diocese of Chester, then in 1547 Sir Richard Colton bought the manor and the advowson (the right to present the priest). In 1580 the Coltons sold Prestbury to the Legh family, who have held it ever since.

The medieval church was comprehensively restored from 1879-1888 by Sir George Gilbert Scott.

The nave and chancel date to the 13th century and are in Early English style. Around 1310 the south aisle and the first north aisle were added. The west tower and porch date to around 1480, while the bellcote and clerestory were added in the Elizabethan period. 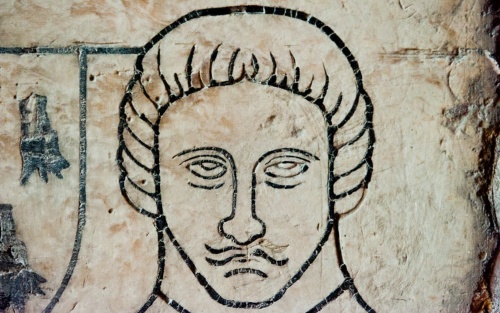 The nave roof dates to 1675. Over the nave pillars are fascinating paintings depicting the 12 apostles and the 12 tribes of Israel. The paintings were the work of a travelling painter and created in 1719. The pulpit was made in 1607 and features traditional Jacobean interlaced panels.

At the west end of the nave is a cabinet holding a piece of heraldic glass from the Legh family chapel (1601). Another remnant of the Legh chapel is the 1740 screen now used to separate the nave and chancel. It bears the Hanoverian coat of arms, painted in 1787.

Against the north wall of the sanctuary is the oldest memorial in the church, an incised grave slab commemorating Reginald Legh (d 1482). Legh was responsible for building the tower and porch. Beside it is a grave slab commemorating Sir Edward Warren, Lord Mayor of Poynton (d 1558). Also in the chancel is a reset 12th-century tympanum decorated with an interlaced trellis pattern.

In the north aisle is a 13th-century circular font, recut in 1857. It is decorated with carved heads that may represent monks from the Abbey of St Werburgh, which owned the church at that time. 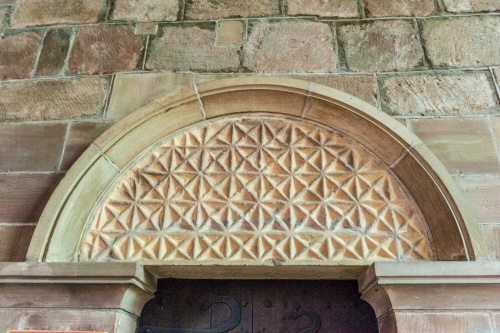 12th-century tympanum in the chancel

Another highlight is a finely carved grave slab commemorating Robert Downes (d 1495) and his wife, as well as his father and mother. This is thought to be the only Pre-Reformation alabaster tomb slab in Cheshire. The curious thing about this slab is that the inscription above the couple's head is upside down, presumably so that it could be more easily read by a viewer standing at the head of a horizontal tomb chest.

The chapel stands in the south-east corner of the churchyard, well away from the church. It is a very simple two-cell building, probably erected between 1175-1190. What we see today dates from a restoration in 1747 by Sir William Meredith of Henbury.

Thankfully, Sir William kept an original 12th-century doorway with a large frieze of carved figures above it. Over that is an inscription commemorating the 18th-century restoration, for which the Meredith family was awarded the right to use the chapel as a burial vault. 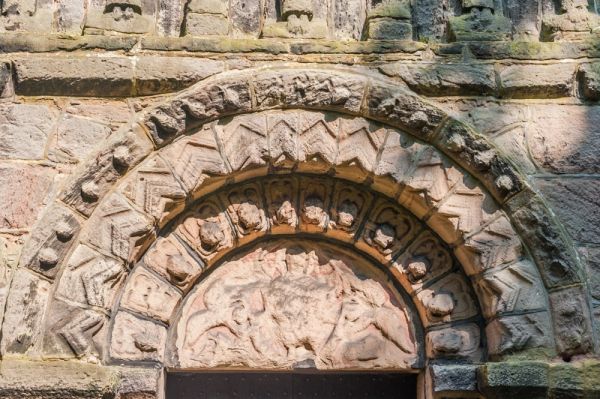 12th-century doorway of the Norman Chapel

The Norman doorway is in three orders with a worn tympanum depicting Christ in Majesty, flanked by angels and seated on a rainbow. Over the doorway is a string course terminating in very worn beast head carvings.

Over the string course is a frieze of seven figures in high relief. The figures are so badly worn that identification is difficult, but the church guide suggests the following, from left to right:

A knight with a battle axe, King Richard I, an Agnus Dei (Lamb of God), A standing figure of Christ, the Holy Ghost in the form of a dove, St Peter with his crossed keys, and a priest with a staff.

Near the Norman Chapel stands a Saxon cross. Carved fragments of the cross were discovered built into the church wall in 1840. They were removed and reassembled to form the cross we see today, which is made of three stone fragments cemented together. The carved fragments were originally thought to date to around AD 670 but most historians now think the cross was carved in the 19th or 11th century. 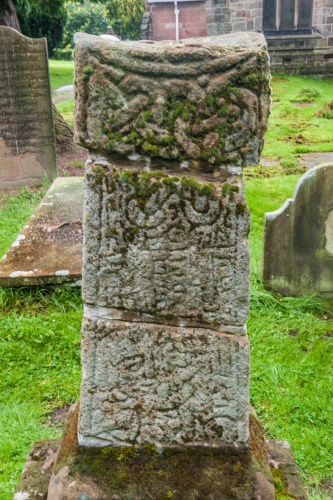 The church stands on The Village (the A538) on the west bank of the River Bollin in the centre of Prestbury. There is a parking area on Macclesfield Road, an easy 5-minute stroll from the churchyard. The church was open when we visited. 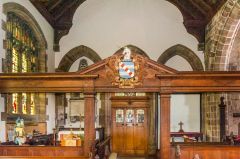 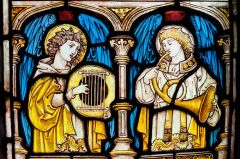 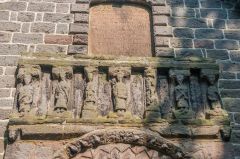 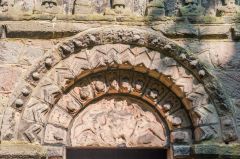