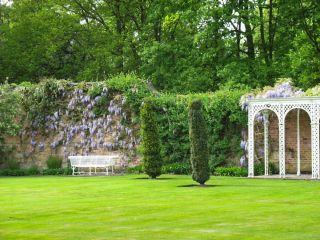 Hare Hill Garden
Hare Hill Garden is a lovely 10-acre wooded garden set around a historic walled garden. Hare Hill is noted for its flowering azalea and rhododendrons and is home to the national collection of holly. Visitors will enjoy walks through the parkland surrounding the garden and can extend walks to reach Alderley Edge.

The man most responsible for the gardens as we see them today was Col. Charles Brocklehurst, the last private owner of Hare Hill House. Col. Brocklehurst was a rhododendron enthusiast and began planting varieties of rhododendron in the 1960s.

He focussed primarily on traditional purple varieties, but the National Trust has since replaced many of these with other colours to create more variety in the garden. The Trust has also planted eucryphia, roses, hydrangeas and lacecaps to create interest throughout the year. In spring you will see snowdrops, magnolias, and daffodils.

The best time to visit Hare Hill is in early summer when vivid colour is provided by over 70 varieties of rhododendrons.

The walled garden was originally created to provide cut flowers and vegetables for the house residents, but Col. Brocklehurst, working with the well-known plantsman James Russell, transformed the space into a peaceful retreat.

Borders line the sunny west wall and colourful plants now grow where the old greenhouses once stood. Plants in the walled garden follow a white theme, with iris, poppies, white catmint and lupins. There are over 50 holly trees including an unusual Highclere Holly (Ilex x altaclerensis).

The gardens surround a late Georgian house built in 1800 for William Hibbert and enlarged later in the Victorian period by the Brocklehurst family. The house stands two storeys high and is built of red brick under a slate roof. The house is listed Grade II for its heritage value. The National Trust sold the house in 1978 to enable it to finance keeping the historic gardens maintained.