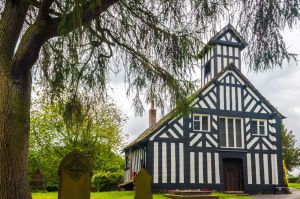 Siddington church stands on a hill overlooking the A34 on one side and idyllic countryside on the other. It is apart from the village core as if it wandered off to gain some privacy. The first church here dates to the 14th century, but the earliest written record we have dates to 1474 when it appears to have been a chapel of ease for Prestbury, or possibly a domestic chapel for the Fittons of Siddington Hall.

The chapel was timber-framed, but much of the timberwork was pulled down in the 18th century to be replaced by brick.

The church presents a strange impression; at first glance, it appears to be timber-framed, yet a closer look shows that the 'half timbers' are painted onto the west gable end. Yet even that is deceiving; the building actually is timber-framed, constructed of timber, with wattle and daub infill.

By 1815 the weight of the flagstone roof tiles caused the nave walls to crumble, so that they had to be propped up with brick. The brick was repainted to echo the underlying timber-framed structure, which remains hidden beneath the brick cladding. 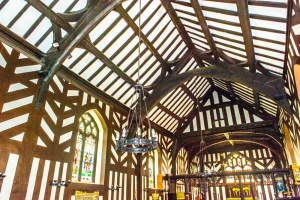 The church interior is a delightful mix of old and new. The highlight is a carved 14th-century screen, topped with a peculiar rood ornament in the form of corn dollies. These corn dollies remind us of the popular harvest festival each October, when the church is filled to overflowing with thousands of corn dollies.

In the churchyard are two simple white crosses commemorating a pair of Canadian airmen who died at Thorneycroft Hall in 1918 when their light aircraft struck a flagpole and crashed. The story goes that the two airmen, stationed at Shawbury, Shropshire, had to make a forced landing at the hall a few months earlier.

They did this successfully and made friends with the Bickerton family who owned the Hall. The airmen took to making regular training flights to Thorneycroft, where they would land, have lunch with the Bickertons, and return to their base.

When the two Canadians received orders to go to the Front in France, they made one final trip to Thorneycroft Hall to tell the Bickertons that they would not be visiting in future. While attempting to land, a wingtip caught a support stay on a flagpole, and the plane crashed. Lt Alex MacGillivray died that day, while Lt Claude Watchorn died the following day.

Their simple graves were erected near the Bickerton family tombs in the churchyard. A pair of oak trees were planted on the crash site (one still stands). Also in the churchyard is a medieval preaching cross.

The unusual west bell turret is worth noticing - it houses a bell specially cast in 1588 to sound the alarm if the Spanish Armada proved successful. As history tells us, the Armada failed, and the tenor bell was instead rung to celebrate English victory.

More self catering near Siddington, All Saints Church >>

More bed and breakfasts near Siddington, All Saints Church >>