Self Catering in Yorkshire - Staithes 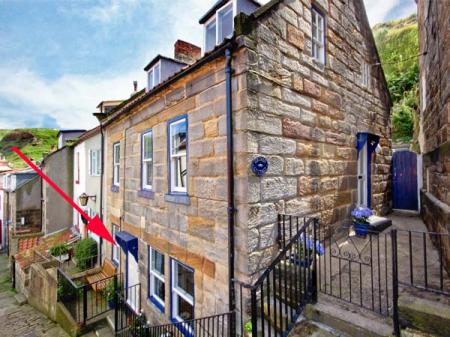 Grimes Nook is a lower ground floor apartment in the seaside village of Staithes. This apartment sleeps two people in one double bedroom and also has a shower room and an open plan living area with kitchenette, dining area and sitting area with woodburning stove. Outside there is a small front sitting area with bench and parking is in a nearby car park.

Grimes Nook is an ideal romantic retreat in a lovely area, with the North York Moors, Whitby and Scarborough all well worth exploring.

For lovers of small spaces and who like each others company, a lot .
This old fisherman's cottage is very quaint, of that there is no doubt. But, it is not without quite a lot of faults that are down to the owners and managers of the cottage. Because the cottage is away from the road, it is difficult to locate on a sat nav, and we ended up at a dead end on the road that leads down to the harbour. This road is so narrow that only one car at a time can be on it. So, as you can imagine it was an absolute nightmare parking the car, unloading it and then moving it a quarter of a mile up the road to a car park. The cottage is very small and just about caters for two people. The kitchen has facilities that you would expect e.g. fridge and cooker. But, surprisingly, the fridge does not have a freezer box in it and for some odd reason the owners have not installed a freezer, and instead, have put in a dishwasher. When you consider that the cottage is very small, there really doesn't seem much point having a dishwasher because I can't see anyone having big dinner parties that requires such a thing. Also, there is a table and chairs that does take up a large space in the kitchen area that would only require a very small fold out table, and folding chairs. Similarly to this, for some strange reason, there are two, quite large, three seater sofas that take up an awful lot of space that could be used in a far greater way. The same applies to the bathroom space. There is a big shower cubicle, a toilet and a sink. Next to the sink, on the right, is a floor to ceiling cupboard, that is separated into two halves. The top half is locked? And the bottom half is being utilised for cleaning equipment? There is nowhere to put washing items, as the bathroom cabinet is big enough for only a few items. The bedroom is what you would expect and has in it a small double bed, an old double freestanding wardrobe and an old wooden chair. Now, let the fun begin with sleeping. Personally, I would have expected a medium/firm mattress that was fairly new. No. What you get is a mattress that is so old that the springs are well beyond their boingability that you sink down to the slats on the bed frame. Now, I suffer from quite a lot of mild spinal complaints, and this mattress exacerbated all of these ailments to the point that I struggled to move first thing in the morning. It is far from comfortable and needs changing. The cottage is also damp and there is a dehumidifier in the lounge that really needs to be on all of the time to take the moisture out of the air. The damp is bad enough that there is a visible patch in the corner where the TV is. If there had been more reviews on this cottage there is no way my wife would have booked us for a full week and only have booked us for three nights as, despite the fact that Staithes is very pretty, there is nothing to do, apart from visit the two pubs and maybe visit the Captain Cook museum, and to spend any longer in the cottage would require a couple to be very happy in their own company and to do a lot of travelling to other places. Wether or not the cottage was part of a bigger house at some point, I am unsure, as there is the top part of Grimes Nook, which is also rented out. Because of this any movement from the visitors above can get very annoying, very quickly. I would love to give a better review of the cottage, but, there are too many things that made it a forgettable venture.
HAV1965
2019-06-02

Quaint but not without hazards
We booked this cottage for 4 nights from the 26th of August as a treat for my birthday, staithes is somewhere I have always wanted to go as it looks lovely in pictures I have seen. The cottage itself was nice and clean and looked very tidy and overall was a nice stay. As an aside to that, what I think people should know is that although it says you can park close by to unload/load your stuff, it is very difficult to get a parking place and you can't park on the street as it's only one car width, making unloading with a full compliment of food and clothes really a chore, we had to pay an extra £30 to park for the 4 days in the top Car park and carry heavy luggage about half a mile down very steep slopes and steps, not for the disabled..
Steve B
2017-08-31

Cosy Retreat
Stayed in this lovely cosy cottage. The wood burner was great and the cottage was very clean and had everything to make our 3 days away very special. Would definitely recommend.
Karenlonsdale
2016-11-17

Perfect
Stayed in this lovely cottage for 3 nights over bank holiday weekend. The cottage provided everthing we needed, very comfortable, immaculate, wood burning stove was a bonus, well equipped kitchen and spacious bathroom. We managed to unload and load easily and parked in council car park. We will definately be back.
kim w
2016-05-02

Absolutely delighted with the cottage; the owners had clearly thought of everything right down to the local arts and crafts on display to the Christy towels in the bathroom. Really nice finishing touches. The village itself was beautiful and we really liked wandering around in the evening after our various daytrips.
Mrs Payne
2016-04-18

Details
Electric panel heaters with woodburning stove
Electric oven and hob, microwave, fridge, dishwasher, TV with Freeview, DVD, CD/radio, selection of books, games and DVDs
Fuel, power and starter pack for woodburning stove inc in rent
Bed linen and towels inc in rent
Pay and display car parks available in the top part of the village, charges apply at certain times of the year
Loading/unloading area approximately 100 yards from cottage - no parking at the bottom of Staithes village
Front patio with bench
Two well-behaved dogs welcome
Sorry, no smoking
Shops, pubs and beach 2 mins walk
Note: This property is accessed via a short flight of steps
Note: Mobile phone reception is limited in Staithes
Note: Parking and stairs may mean cottage is unsuitable for the less mobile
Note: Check-in 4pm
Note: No children, including infants
Note: This property has recently been refurbished

Get an Ordnance Survey map covering the Staithes area.