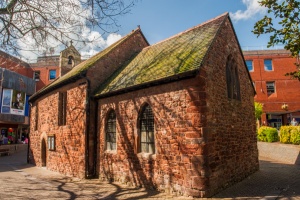 The historic church od St Pancras stands in the incongruous surroundings of a modern shopping centre courtyard, behind Exeter's Guildhall. The modern surroundings belie the age of this site, formerly part of Exeter's 'British Quarter'. St Pancras can lay claim to being one of the oldest Christian sites in Britain, and certainly the oldest in Exeter.

The church dedication provides a clue to the history of the site. There are 2 possible saints named Pancras, but we do not know which one the church is dedicated to. The first was a teenager killed by the Roman Emperor Diocletian in AD 304, the second is a 3rd-century Sicilian bishop.

The earliest historical mention of the church comes from 1191, though Victorian records suggest the presence of a Saxon doorway. The layout of the church and its size are very similar to the celebrated Saxon church at Escombe in County Durham, suggesting that the first church here was much earlier than documentary evidence can verify. 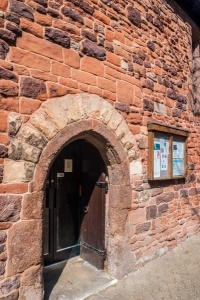 It is remarkable that the church has survived at all, for it has never had tithes or glebe lands to supply an income. It has never been able to support a parsonage. Over the centuries it has been linked to several nearby parishes.

Many of Exeter's medieval church were pulled down and lost forever, but St Pancras managed to survive. It is just as well that it did, for when German bombs heavily damaged a large number of city churches in WWII St Pancras was used as a temporary chapel for other parishes.

Whatever the origins of the site, most of the present building is 13th-century work, with restoration by Victorian architect JL Pearson in 1888. Pearson is responsible for the rebuilt chancel arch and the colourful 1899 east window, with panels depicting the Crucifixion, St Pancras, and St Boniface.

The church has had a difficult history. It fell out of use completely from 1658 until 1831, when it was restored by Robert Cornish. Cornish found the Saxon doorway mentioned above during restoration work, but the doorway was later lost. Three carved stone fragments from the medieval period were set into the south chancel wall.

Look for the peculiar carved face on one of the fragments. Also notice the exterior south-west corner, which was chamfered to allow easier passage horses and carts. 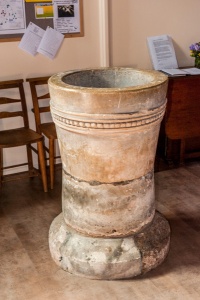 St Pancras church is extremely simple, consisting of a small nave, chancel, and bellcote over the west gable. How small? The church stretches just over 46 feet and is 16 feet wide. In the early 19th century the interior was said to be so cramped for space that it was impossible for worshippers to kneel.

The small bellcote contains a single 15th-century bell, cast a foundry off Mermaid Street. The bell is rather aptly inscribed with a Latin phrase which translates as 'I may be small, nevertheless I am heard over a wide distance'.

The oldest feature is the 12th-century font, decorated with beaded carving. There is a 13th-century piscina and aumbry cupboard in the chancel. The polygonal pulpit is Jacobean, decorated with carved foliage panels. In the chancel are a pair of corbel heads, one dating to the 12th century, the other slightly later.

Also within the church are five 18th and 19th-century wall monuments brought here from All Hallows church on Goldsmith Street when that building was torn down to make way for road widening in 1906. Perhaps the finest monument is to Loveday Bellett, who died in 1711. The monument boasts a finely carved border depicting fruit, flowers, and skulls; a reminder of mortality.

The church is usually open weekdays, and is a welcome sanctuary of peace within the busy Guildhall Shopping Precinct, off High Street. 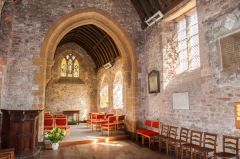 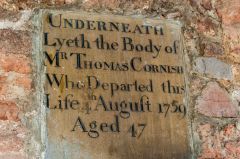 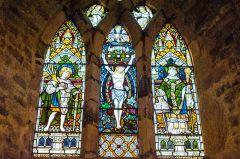