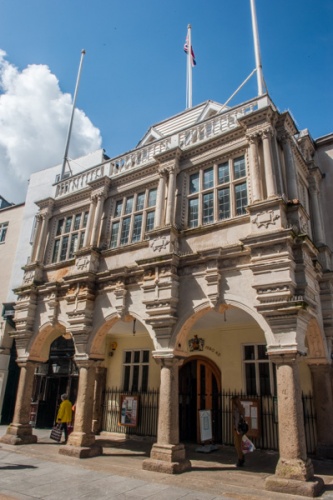 In the Middle Ages, felons awaiting execution were held here overnight before walking to a scaffold erected outside the Hall. During the Bloody Assizes following the Monmouth Rebellion, the infamous Judge Jeffreys presided over hearings here. It is hard to think of those grim times and then realise that during WWII the Guildhall was used as a dance hall.

A Guildhall existed on this site since about 1160, but the current building is almost entirely a product of the late 15th century, probably around 1466. The building is entered through a massive oaken door, carved by a local joiner named Nicholas Baggett in 1592 and embellished with an ornate pattern resembling a peacock's fan.

The most striking feature is the superb timber-framed 15th-century roof, made of oak by local craftsmen. The roof timbers are supported on stone corbels carved to resemble grotesque animals.

The hall is panelled with 80 unique individual panes of richly carved oak, installed in 1594 with the aid of the city's trade guilds. The panels depict the coats of arms of the guilds, as well as past mayors and benefactors. The rest of the guildhall has undergone frequent renovations and additions, particularly in the 18th and 19th centuries.

One of the newest additions is a bust of Queen Victoria, added in 1887. At the west end is a gallery inserted in 1863 to replace a Magistrates Court. The ornate Mayor's chair was built in 1697, though it has been heavily restored since then.

The Exter Guildhall claims to hold the distinction of being the oldest municipal building in England still in continuous use; it is still used for civic functions and council meetings and can be hired out for weddings and private events. One room not always open to visitors is the Mayor's Parlour, with an ornate plasterwork ceiling and dark wood panelling. 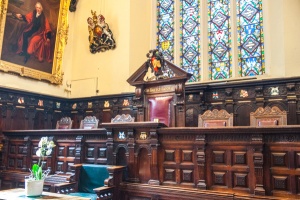 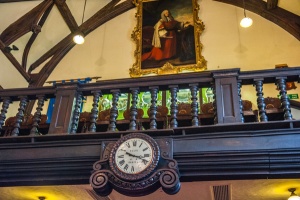 The gallery and clock 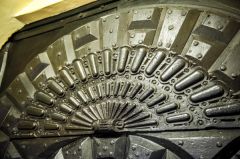