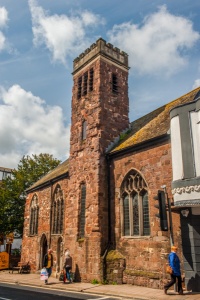 In AD 1053 Lady Gytha of Wessex, mother of King Harold, founded a private chapel in Exeter, dedicated to St Olaf, an early 11th-century king of Norway. Olaf died in a peasant rebellion at the Battle of Stiklestad in 1030, so would have been a contemporary of Gytha. St Olave's was a 'house chapel', the Saxon equivalent of a medieval chantry, where prayers could be said for Gytha's husband, Earl Godwin of Wessex.

When William the Conqueror defeated King Harold at the Battle of Hastings Gytha seems to have retreated to Exeter, and perhaps been responsible for that city rising against the new Norman king. William besieged Exeter, and Gytha was forced to escape, helped by a priest of St Olave's church. She escaped into exile, probably to Scandinavia, and was never heard from again.

William gave the church to the monks of Battle Abbey, who established the nearby St Nicholas Priory in 1087. The Saxon chapel was rebuilt in the 14th century, with a north aisle added in the 15t century. Oliver Cromwell had St Olave's closed during the Commonwealth, and the building was briefly used for a school. 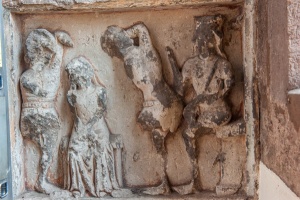 Medieval carved panel of
the Scourging of Christ

In 1635 a wave of Huguenot refugees fleeing religious persecution in France settled in Exeter, and the old church was restored for their use. You can see a large number of grave slabs set into the floor inscribed with Flemish names from this period.

The church fell out of use again in the 18th century and records from 1744 show that it was once again being used as a school. Throughout this period it also served as a military chapel for regiments stationed in Exeter. The church was restored in 1815 and 1874.

The interior feels cramped, but there is a lot of interest in such a small space. The nave has a three-bay arcade, supported on octagonal 14th-century piers. The pulpit is rather curiously placed under the tower, which is built into the body of the church, intruding into the sanctuary. The tower may be the only remnant of Gytha's original Saxon church. Its location within the sanctuary may be unique in Britain.

Look for the damaged staircase that used to lead to the rood loft. Set onto the ruined stairs is a beautifully carved Romanesque carved column capital and base. Within the tower is a damaged carved panel depicting the Scourging of Christ. The carving probably formed part of an altarpiece. You can catch just a glimpse of the original timber roof, most of which is hidden by plaster panels.

One historic feature that cannot readily be seen is the solitary medieval bell, inscribed with a Latin verse which translates as 'By my lively voice I disperse all that is harmful'. On the west wall is a painted coat of arms to William III, dated 1699.

In a blocked doorway set into the tower exterior is a memorial to First World War dead.

St Olave's is normally open daily and is just a short stroll from the cathedral at the top of Fore Street.

Do take the time to visit St Nicholas Priory, in an alley behind St Olave's. The Priory had close links to the church throughout the medieval period. It was converted into a Tudor townhouse after the Reformation and boasts very good Tudor plasterwork ceilings. 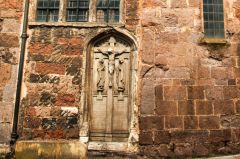 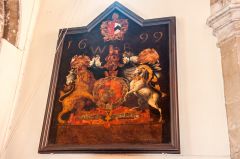