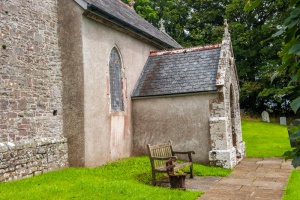 Set in the quiet Devon village of Brushford stands the lovely 12th-century church of St Mary. The church seems half-forgotten, at the end of a lane high above the River Taw.

While the church has Norman origins, the chancel dates to the 14th century and the nave to the 15th century. The west tower was added during the following century, and the entire church rebuilt in 1876.

The only surviving feature of the medieval church is the 12th-century south doorway. The tower was originally topped by a spire, but this burned down in 1693 after it was struck by lightning and was replaced with a peculiar cap hung with slate tiles.

The Victorian rebuilding changed the character of the interior, but there are still several reminders of the church's medieval origins. The best historic feature is the colourful late 15th-century chance screen. The screen stretches three bays and each bay has linenfold oak wainscotting.

The tracery is sublime, a superb example of Flamboyant Gothic style, with delicate curves and exceptionally fine filigree. The tracery has been compared to fine Breton dentelle lace. The screen originally had an ogee-headed door opening, but this was altered at some point to hold a square door. The striking screen canopy has three image brackets. 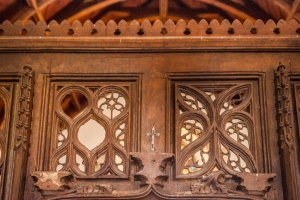 Ornate tracery on the screen

Curiously, there does not seem to have been a rood gallery over the screen. The French style of the carving suggests that the screen was either imported from a church in Brittany or, more likely, made by a craftsman from Brittany.

The nearby churches at Coldridge and Colebrooke have similar screens, suggesting an immigrant master carver was at work on all 3 churches. The style of carving is found nowhere else in England. Sadly the Brushford screen was damaged at the Reformation, when the 3 statues were removed.

Another historic feature is the Jacobean pulpit, set on a 19th-century stone base. Set into the pulpit passage is a grave slab to John Luxton, who died in 1676. The wagon roof above the nave retains 15th-century timbers.

In the nave are a pair of late 14th century bells cast by William Dawe of Exeter, also known as William the Founder. The bells are 2 of a set of 3 which hung in the belfry for centuries until they cracked. The remaining 14th-century bell is still in regular use.

Immediately south of the church is Brushford Barton manor house, home to the Luxton family from 1566-1922.

St Mary's is one of those delightful places that make exploring country churches so much fun, the constant joy of discovering half-forgotten historic treasures like the medieval screen and the 14th-century bells. There is no outstanding architecture here, just a wonderful country church in a beautiful setting. 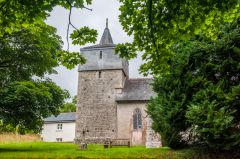 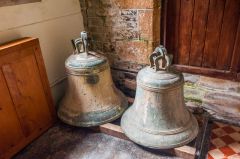 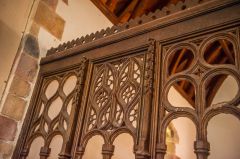