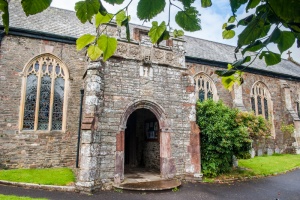 The south porch of Chulmleigh church

An old tradition says that St Mary Magdalene church in Chulmleigh was founded in the 10th century by King Athelstan. However, there is no contemporary evidence for this tradition, which first appeared in a 13th-century charter. The present building is entirely 15th century save for an Anglo-Norman carved panel mounted over the doorway, which hints at an earlier church on the site.

Chulmleigh was already a sizeable settlement at the time of the Domesday Book in 1086. After the Norman Conquest, William the Conqueror granted vast swaths of land in the south west to one of his supporters, a baron named Baldwin de Meulles. Baldwin gave large parcels of land to his own followers, but kept Chulmleigh for himself as part of his Okehampton estates.

The Baldwin estates passed by marriage to the Courtenay family in 1188, and it was John Courtenay who was granted the right to hold a weekly market and an annual fair in Chulmleigh in 1253. The fair was held on 22 July, St Mary Magdalene's feast day, suggesting that there was already a church dedicated to that saint in existence. 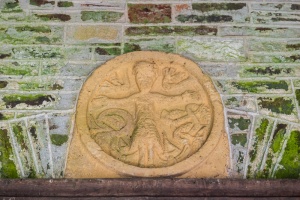 In 1260 John Courtenay appointed a prebend to the church. This right to appoint a prebend suggests that the church was a private place of worship, possibly established by the Courtenays, who then appointed clerics as they wished. Essentially this means that St Mary's was not a normal parish church, but a collegiate church, under a rector and five prebends.

The prebends were not necessarily ordained priests, and often the post was nothing more than a sinecure, a reward for loyalty to the lord. The prebends might not reside in Chulmleigh or even attend services. Their main duty was often to say prayers for the souls of the patron and his family.

The Courtenays often appointed their own servants as prebends, or used the post to augment the income of impoverished members of the family. Many prebends held more than one prebendary post at once and drew multiple incomes. 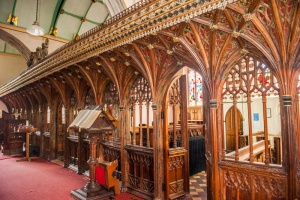 Chulmleigh flourished during the medieval period due to a burgeoning wool trade, but as the trade declined in the 17th and 18th centuries the church was allowed to decay. It was not until the Victorian period that the town was wealthy enough to restore the building. And restore it they did; the medieval church furnishings were swept away, and as a result, the interior is a wonderful example of Victorian Gothic. Most of the stained glass is 19th century.

Though most of what we see today was part of the Victorian restoration, some fascinating historic artefacts remain, including the 15th century carved and painted oak rood screen stretching the full width of the church. Atop the screen are four 17th century carved states of the evangelists.

How did the screen survive when so many similar screens were destroyed? The remoteness of the parish played a part, but it is more likely that the parishioners were simply unwilling to destroy 'their' beautiful work of art. The highlight is the richly carved frieze in three bands, decorated with foliage patterns.

Look up and you will see the original medieval wagon roof with painted and carved bosses. The roof timbers terminate at figures of carved angels in the chancel and nave.

The oldest feature inside the church is the late 15th-century font, carved with foliage and floral patterns.

St Mary's is a superb medieval building, a testament to the wealth of the medieval wool trade in this area of Devon. 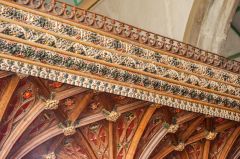 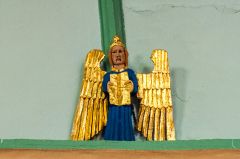 Self Catering near Chulmleigh