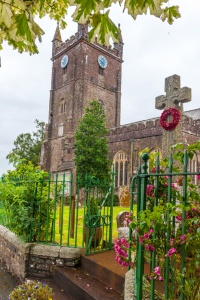 We do not know when the first church was built at Witheridge. It is possible there was a timber church here in the Saxon period, but the first building we know of was a Norman church built around AD 1250. That 13th-century building had a nave and chancel with a rounded apse. The nave was extended in the 14th century and widened to create an aisle.

Almost nothing remains of the Norman church beyond 3 nave pillars and part of the north chancel wall.

In 1354 the church was granted to the Abbey of Cannington in Somerset, and the Abbess of Cannington had the right to appoint rectors. In 1427 the Abbess tried to exert more control over Witheridge church, but the Bishop of Exeter stepped in, and a perpetual vicarage was set up, supported by the gift of 20 acres of land at South Coombe.

The church was rebuilt in Perpendicular Gothic style during the 15th century, but it was not until 1568 that it gained the striking west tower that makes it such a local landmark. Money for the new tower was given in the will of Joan Melhuish. The tower was topped by a shingled spire which was struck by lightning in 1840. Rather than replace the spire, the parishioners paid £150 to raise the height of the tower 40 feet. 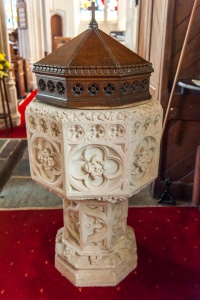 For many years the church maintained 8 dwellings, constituting a Poor House, in Church Lane. In 1840 the dwellings were pulled down to make way for a new turnpike road from South Molton.

You enter St John the Baptist by the restored 15th-century porch. The outer arch and the inner doorway are Tudor. Inside the door is the exquisitely carved late 15th-century octagonal font. Each face of the font is decorated with a quatrefoil below three smaller quatrefoils and surrounded by foliage carvings. The nave roof is 15th century, with finely carved bosses.

The most interesting historic feature is the magnificent 15th-century pulpit, one of only 70 medieval stone pulpits in England. The pulpit was created between 145-1500 and is composed of 5 highly decorated panels. Each panel is topped by an ogee-headed canopy and below the canopy is a Biblical figure.

The central panel depicts a Crucifix with St Mary and St John carved in relief. Other faces show St Paul, St Peter, a Bishop, and a female figure thought to be St Mary Magdalene. All the figures lost their heads at the hands of Puritan iconoclasts around 1650. New heads were carved in the 19th century, but curiously only for the male figures; the female figure remains headless.

Aside from the font, pulpit, and nave roof, most of the church is a product of the Victorian restoration. Some of the windows hold good 19th-century glass, and there are rather plain 19th century monuments.

What I really enjoyed were the carved capitals on the nave pillars. Each is different and full of intricately carved detail. Here you see a face, peeking out from foliage, there you see a beast (probably a fox) seizing a goose in its jaws. The detail is wonderful, and the sense of imagination and variety provides a fascinating glimpse into the medieval world.

St John's church was open when I visited, and as far as I can determine is open daily to visitors. 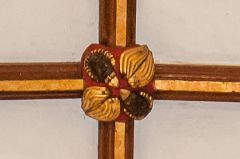 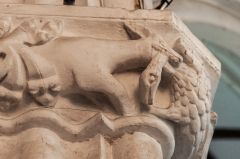 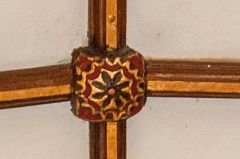 More self catering near Witheridge

More bed and breakfasts near Witheridge