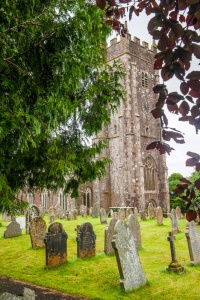 Morchard Bishop is a large village on the old turnpike road linking Barnstaple and Crediton. The recorded history of the village goes back to at least 1165 when the Bishop of Exeter purchased the manor here. In 1548 Edward VI forced the bishop to hand the manor over to Sir Thomas Darcy.

The heyday of Morchard Bishop was the 18th century, when the population reached the neighbourhood of 2,000 people. When a new turnpike road was built along the valley bottom in the 1820s it diverted visitors away from the village. As a result, the population dropped by half by 1901.

The most interesting historic building in Morchard Bishop is the 15th-16th century church of St Mary's. There was an early medieval church here, but this was rebuilt beginning in the mid-15th century. Bishop Lacy of Exeter took a personal interest in the 15th-century rebuilding, and in 1451 he granted an indulgence (a remission for sins) to anyone who gave money or labour to the rebuilding work or the church furnishings.

Almost the entire church dates from the late medieval and Tudor period, with the exception of the panelled and plastered chancel, which was rebuilt in the 18th century. The east window contains colourful 18th-century glass.

Below the window is the altar, with a finely carved late 18th-century wooden reredos flanked by Ionic pilasters. In an oval panel atop the reredos is an inscription reading 'This do in Remembrance of me'. The altar rails were crafted in 1768 by W. Stribling. In the north aisle is a 17th-century oak chest with an arcaded front design. 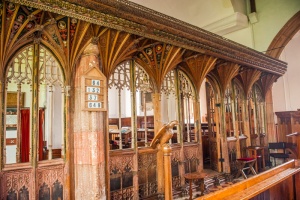 Without doubt the most interesting feature inside the church is a beautifully carved and painted late medieval screen. The ornate carving and colourful painting is similar to that at St Thomas' church in Canterbury, Kent. The upper section has very fine Perpendicular Gothic tracery, and the canopy is made up of exceptionally intricate friezes depicting foliage.

The screen has had a chequered history. It was taken from the church during Cromwell's Commonwealth and installed at nearby Beech House. It was returned to the church in 1840 and adapted to form a tower screen with multiple tiered sections.

The screen was reassembled as a whole and carefully restored to its original position in 1930. You can still see traces of original medieval paintwork in places, as well as more colourful modern restoration painting.

Aside from the screen, the highlight of St Mary's is a pair of effigies in the south aisle. But just who do the effigies represent? One theory is that they depict William Easton (d. 1505) and his wife, who gave money to complete the aisle rebuilding.

Another theory, outlined in the official English Heritage description of the church, suggests that they are Gabriel Green (d. 1485) and his wife Dorothy (d. 1480) of Easton Barton. The male is shown in the costume of a wealthy merchant, with a burgher's cap and short sword The woman has a pyramid headdress, and a girdle with rosary beads.

Other historic monuments include an ornate wall tablet to Edward Pridham (d. 1687) and a black marble memorial to William Tuckfield (d. 1688).

One of the most peculiar incidents in the long history of St Mary's church came in 1952, when a meteorite struck the church tower. Thankfully, the damage was minimal, but I've never heard of another British church being hit by a meteorite.

St Mary's is a delightful church, in a very petty village. The screen is exceptional, and well worth a visit to see. 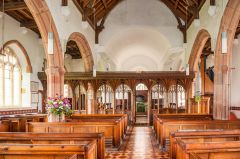 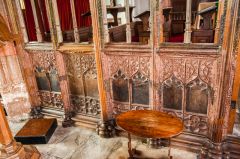 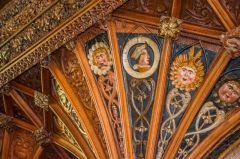 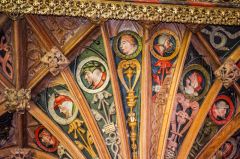 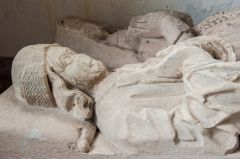 Self Catering near Morchard Bishop