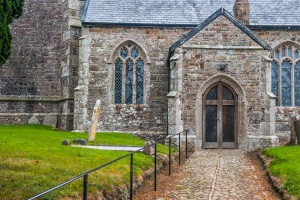 The name of Coldridge village is rather descriptive of the location. St Matthew's church stands at the top of a high ridge and its tower is visible for miles across the surrounding valleys and well into Dartmoor National Park to the south.

The church is almost entirely a product of the early 15th and 16th centuries, but if you look closely you will find traces of an earlier Norman church in the stonework. The church seems to have been dedicated to St Mary until the 19th century. The Diocesan Directory of 1782 confirms the dedication to St Mary, as does White's County Directory of 1850. However, directories published after 1857 show the dedication as St Matthew.

Set into the tower is a clock installed in memory of those who died in the First World War. The clock has only 2 faces, overlooking the village, a a face with gold hands and numerals.

You enter through the south porch, where you will find a slate memorial to John Ridd, curate (d. 1810) and a very worn grave marker inscribed 'IE 1755'.

The most interesting interior features include a finely carved 15th-century rood screen. Unlike many Devon screens, the Coldridge example is uncoloured. 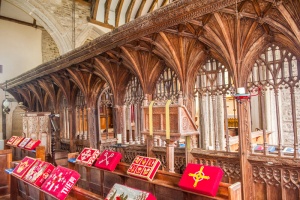 The beautifully carved pulpit is a rare medieval survivor, dating to the 15th century and featuring exquisitely detailed scrollwork. The screen stretches to 12 bays, with double doors giving access to the chancel and aisles. Each bay has beautifully carved Perpendicular tracery and the ribbed coving has wonderfully detailed Gothic tracery.

Some 15th-century glass remains, though it is much fragmented. In the Evans Chapel is a 16th-century glass panel showing Edward VI holding a book and sceptre. Late medieval floor tiles remain near the font and in the chancel. The tiles were made in Barnstaple and are beautifully decorated with figures of swans, lions, and roses.

In the north aisle are several very nicely carved 16th-century bench ends, with similar carved bench ends in the south aisle and south chancel aisle, where you will find a 16th-century prayer desk made for Sir John Evans.

A finely carved 15th-century parclose screen separates the chancel from the Evans family chapel, now the vestry. The screen features linenfold panelling along the base and Flamboyant tracery in the windows. It truly is a beautifully crafted piece of late medieval craftsmanship.

In the north aisle is the finest memorial in the church; a finely crafted altar tomb to Sir John Evans, set under an ornate canopy. Evans (d. 1511) is shown dressed in chain mail with a surcoat, with an angel holding a shield by his head.

The north and south aisles have beautiful wagon roofs with carved bosses, dating to the late 15th or early 16th century. In the nave is a blocked late 12th-century arch and there is a blocked Norman window in the chancel. Set into the floor is a late 13th-century grave slab.

The oldest historic object in the church is the early 13th-century font, topped with a 17th-century wooden cover.

I really enjoyed visiting St Matthew's church. The screens are well worth seeing, and the church itself is in a wonderful setting, surrounded by pretty period houses. 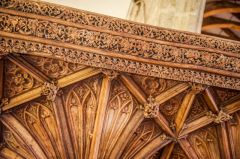 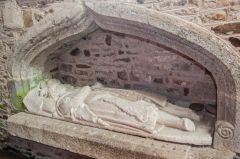 Self Catering near Coldridge