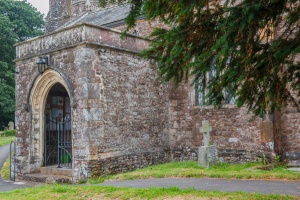 Plymtree is a small village set in lovely rolling mid-Devon countryside a few miles south-east of Cullompton. The parish church of St John the Baptist is primarily a 14th-century building, with the addition of a 15th-century tower and south aisle. The main interest here is a wonderful late 15th century painted rood screen.

This is, without doubt, one of the finest screens in Devon, and dates to around 1470. It features beautiful fan vaulting and an orate scheme of colourful painting. The lower panels are painted with Biblical figures that have somehow managed to retain most of their original colour, making Plymtree's screen one of the best-preserved in the south west.

One scene on the lower panels depicts the Adoration of the Magi. A persistent story suggests that the figures of the 3 Kings portray Cardinal Morton, Henry VII, and Prince Arthur, which seems rather unlikely unless the figures were added at a much later date.

The only known likeness of Cardinal Morton is on his tomb in Canterbury Cathedral and this shows him without a beard and looking nothing like the painted figure on Plymtree's screen. But there are a multitude of other figures, 34 in total, some must represent local people. One of the figures represents Joseph of Arimathea, a reminder that Plymtree was on the medieval pilgrim's route to Glastonbury, associated with legends of St Joseph and the Holy Grail. 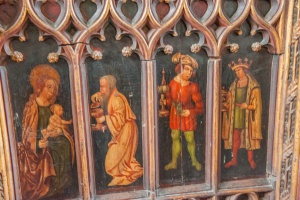 The Adoration of the Magi - who are the Three Kings?

It used to be thought that the screen was not original to the church but was brought to Plymtree after the Reformation from the 13th-century Cistercian abbey at Dunkeswell.

In the north wall is a blocked doorway (opposite the main entrance). This may be early Norman, or indeed, late Saxon, suggesting that there was a church here well before the Norman Conquest, but the earliest written record is of a vicar appointed in 1261.

At the west end of the south aisle is a wonderful 16th-century alabaster panel set on the wall. This is thought to be Flemish, and depicts in minute detail a scene of the risen Christ and Roman soldiers. This panel was originally part of the altar until it was moved to the back of the church in the early 20th century. Beside the panel is the octagonal font, with an unusual wooden cover decorated with the figure of a dove. 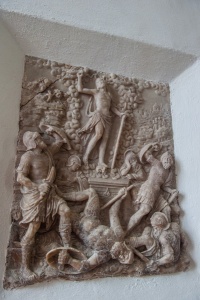 The nearby benches of the nave and aisle have lovely 15th and early 16th century carved bench ends. On the exterior of the tower is a statue of a Madonna and Child, a rare survivor of the Reformation. When the statue was restored in 1992 a number of stones, a leather ball, and a spinning top were found behind the statue, along with the Madonna's stone crown. The assumption is that during the religious turmoil of the Reformation these missiles were hurled at the statue, trying unsuccessfully to destroy it.

In the churchyard is an ancient yew tree, thought to be over 1100 years old. It is fascinating to think how much history this old tree has seen! There is a suggestion that the yew was planted to replace an earlier Saxon or even Celtic holy tree, and that it was the tree that gave the village its name. It is included in a registry of 'Great Trees of East Devon'.

Also in the churchyard is a Celtic cross made of Dartmoor granite. The cross head was discovered in the 1890s and the shaft found acting as a gatepost for the rectory.

Perhaps the most famous rector of Plymtree was Nicholas Monk, brother of the Parliamentary Civil War commander General Monk. Rev. Monk was instrumental in persuading his brother to retore Charles II as king in 1660 after the death of Oliver Cromwell and his son Richard. Reverend Monk later served as Provost of Eton and Bishop of Hereford. 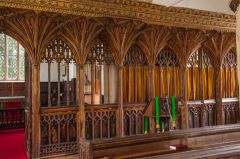 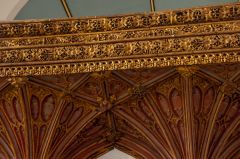 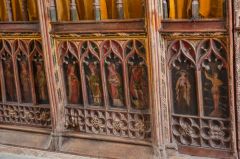 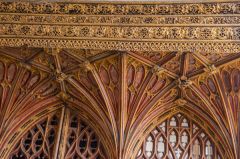 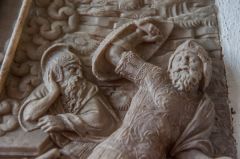 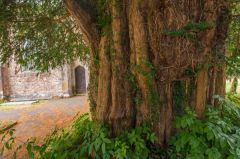 More self catering near Plymtree

More bed and breakfasts near Plymtree

Self Catering near Plymtree