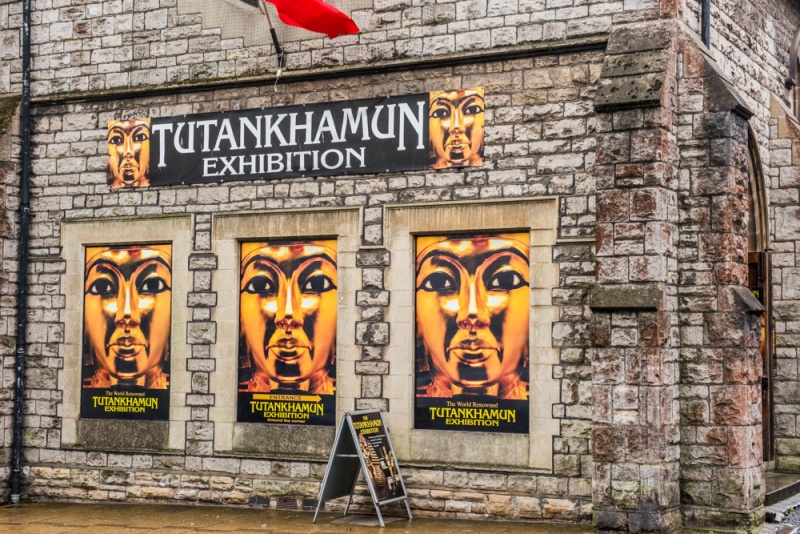 A little bit of Ancient Egypt in the heart of Hardy Country! The Tutankhamun Exhibition is a meticulously crafted recreation of the original Tutankhamun artefacts found when the pharaoh's tomb was reopened in the early 20th century. The artefacts are displayed in an authentic model of the tomb chamber, as it looked in 1922 when archaeologist Howard Carter unearthed it.

The original King Tut treasures are at home in Egypt, but so exacting has been The Tutankhamun Exhibition in recreating the ambience of the boy-king's tomb, that the Exhibition has been used in several films and television documentaries about the pharaoh and the discovery of his long-lost burial chamber.

Displays explore the history of ancient Egypt and the Pharaohs, gods and goddesses, Tutankhamun's family, mummification, and the discovery of Tutankhamun's tomb. A gallery showcases copies of treasures found in the tomb, including the king's personal jewellery.

There is a particularly good timeline covering the discovery of Tutankhamun's tomb, with dozens of old photos from Howard Carter's dig, and a recreation of the inner chamber where Carter found the sarcophagus.

One extremely interesting part of the exhibit deals with Tut himself, about whom it seems very little is actually known. For example, no one is clear on his family tree; who were his parents, or his siblings?

Then there is a fascinating room set aside to considering how Tutankhamun died. One display treats his mummy as a crime scene, with various medical and CSI explanations for peculiarities with his skeleton. According to the evidence, there is a good possibility that the pharaoh was murdered, and the exhibit presents a plausible explanation of why this makes sense given the political climate in Egypt at the time.

On the floor above the Exhibit is a small Mummy Museum, with exhibits on the history of mummification and recreations of several famous mummy discoveries. You can see the Mummy Museum as part of a joint ticket with the Tutankhamun Exhibit, or get an individual ticket to each museum.

The Tutankhamun Exhibition is a permanent exhibition of the World Heritage Organisation. You can get a joint ticket for the Exhibition and several other Dorchester museums including the Dinosaur Museum and Teddy Bear Museum both of which are located just a short walk away.

I quite enjoyed the Tutankhamun Exhibition, especially the story of how Howard Carter discovered and excavated the tomb, and the theories regarding Tut's untimely death at such a young age. Unfortunately, I was not allowed to take photos inside the exhibit, so I can't share any images.

More self catering near Tutankhamun

More bed and breakfasts near Tutankhamun